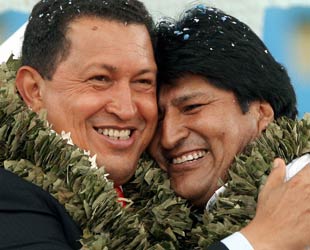 The big news item coming out of Venezuela on December 3 was not President Hugo Chávez’ reelection, but his wide margin of victory. With 62 percent of the vote–the largest ever for Chávez–the former coup leader is stronger than at any time during his eight years in power. Conversely, the opposition has reached an all-time low, losing in all 23 states.

The results represent a mandate for Chávez to deepen what he and his followers call the “revolutionary process.” Rank-and-file members of the Chávez movement overwhelmingly call for an all-out war on corruption and a leadership shakeup within its ranks, particularly among governors, mayors and others at the local level. Chávez expressed the same spirit in his victory speech when he called for brandishing two swords, “one against corruption and the other against bureaucratization.” Many of the movement’s hard-liners, encouraged by Chávez’s own rhetoric, argue that such a campaign goes hand-in-hand with social and economic policies producing far-reaching transformation.

Events since Chávez was first elected president in 1998 also presage important changes for 2007. Every time Chávez has emerged victorious, he has consolidated political control and taken new, bold measures. His triumphs have included the ratification of a new constitution in a national referendum in 1999, the return to power after a two-day coup in April 2002, the defeat of a two-month general strike beginning later that year and his victory in the presidential recall election in 2004. In early 2005, Chávez pushed the limits again by calling for the construction of a new “socialist” model for Venezuela, although he failed to enter into specifics.

Chávez faces a favorable international climate for radical change. Indeed, the Latin American left has never been so well positioned. Chávez’s success in December continues an electoral trend in favor of the Latin American left. The first happened in December 2005 in Bolivia where Chávez’s friend Evo Morales received enough votes to avoid a runoff election. In mid-2006, the left’s fortunes seemed to change with defeats in Peru, Colombia and Mexico. These results were interpreted by some pundits as a setback for Chávez’s activist diplomacy and a sign that the left was on the retreat. However, despite the losses, leftists leapt onto the national stage in all three countries where they had long been confined to the local and state levels. Since then, Luiz Inácio Lula da Silva was re-elected president in Brazil, and in November Sandinista leader Daniel Ortega emerged triumphant in Nicaragua, followed by leftist Rafael Correa in Ecuador.

These developments feed into Chávez’s strategy to promote a bloc of Latin American nations with objectives similar to the European Union. Chávez insists that such a formation should exclude the United States until Latin America is able to meet it on equal terms. Venezuela’s entrance into the common market known as MERCOSUR in 2006 was a step in this direction. MERCOSUR members Argentina, Brazil and Uruguay are also run by left-leaning governments. Significantly, MERCOSUR nations acted as a bloc by supporting Venezuela in its unsuccessful bid in October for a non-permanent seat on the U.N. Security Council.

And yet, in one sense, Chávez’s electoral success is a liability. The December results reinforce the accusations of Chávez’s detractors and much of the national and foreign media that the Venezuelan president has amassed excessive power. The opposition controls only two of the nation’s 23 governorships and an equally small percentage of municipal governments.

But whether competitive politics flourishes largely depends on the opposition. Until now, the main parties of the opposition, including the two largest, Democratic Action (AD) and “Justice First,” have acted as a “disloyal opposition.” They have rejected Chávez’s legitimacy and systematically opposed all his actions. AD actually boycotted the December elections.

Consequently, one of the other major news items on December 3 was opposition candidate Manuel Rosales’ recognition of defeat, although he claimed without plausible evidence that he had been robbed of a significant number of votes. Two days later, Rosales admitted that the National Electoral Council’s manual auditing attested to the accuracy of the official tally. At the same time, he apologized for the “past errors” of the opposition.

While the hard-liners accuse Rosales of having “sold out,” opposition political analyst Tulio Hernández has argued that his immediate recognition of defeat “rids the opposition of the stigma of being pro-military coup.” According to Hernández, Rosales’ posture confirmed that “the majority of the opposition has always been democratic.” Hernández holds Chávez responsible for promoting the notion that the opposition is anti-democratic and a “lackey of the U.S. empire.”

But the opposition hasn’t only been hurt by its intransigence. Its string of setbacks is also due to its failure to break with the neoliberal economic formulas of the past that Chávez has repeatedly excoriated. It continues to support policies that would downsize the state and turn over economic decisionmaking to the private sector.

The opposition’s ongoing defense of neoliberalism was made clear by Rosales’ main campaign offer: ATM cards for all citizens, guaranteeing them an income that would be pegged to the nation’s oil revenue. The proposed handout was part of a concerted effort by opposition leaders to reach out to the poor as a corrective to their close identification with the middle class. But the justification of the proposal was wrapped in neoliberal logic and rhetoric. Rosales’ campaign statement called the ATM card proposal a recognition of the failure of “the bureaucratic elites” and went on to proclaim “faith in the people and their creative capacity to administer the wealth.” The statement concluded on the need for a new “state paradigm.”

Throughout the campaign, the opposition insisted that Chávez had little to show for all of his lofty ideals and fiery rhetoric. In the latter months of the campaign, however, Chávez oversaw a series of costly and ambitious projects. His government’s big push was public transportation. ángel Ontiveros, president of the Institute of State Railroads, put it this way: “The world is looking at Venezuela because it is the only country that is investing in railways and renovating existing ones.” One project completed in October links the town of Cua to Caracas, 20 miles away. Shortly thereafter, the first lines of the metros of the cities of Valencia and Maracaibo were finished. In November, Chávez and Brazilian president Lula presided over the completion of the second bridge over the Orinoco River.

But much more dramatic and far-reaching than public works are the outlines of a new model for the economy that have emerged over the past two years in Venezuela under Chávez’s leadership.

While the government guarantees the rights of private property, it also demands that capitalists fulfill certain obligations. Since early 2005, the government has expropriated various companies that had closed down, turning over management to the workers. At the same time, the National Lands Institute has broken up underutilized agricultural land in accordance with a law passed in 2001. The government is currently negotiating an agreement with scores of owners of failed companies that provides economic relief from the state in return for worker input in decision making.

Another novelty for Venezuela and for much of Latin America is the stringent collection of taxes. Income tax in Venezuela dates back to the early ’40s, but has never been seriously enforced. Over the last two years, the tax agency SENIAT has closed down scores of companies for 24 and 48 hours, including General Motors, McDonalds, and Eastman Kodak to penalize them for failing to keep accurate records.

Equally important is the new model’s exclusion of representatives of powerful economic groups from key government posts in charge of economic decisions. Under past governments, the position of president of the Central Bank, Treasury Minister, Development Minister and Planning Minister usually went to representatives of big capital.

Given the economic expansion generated by high oil prices, investors may be more congenial to the new rules of the game than under normal circumstances. In the oil industry, dozens of foreign companies have accepted the state’s insistence that it assume the controlling influence in all local oil operations. Only ExxonMobil announced intentions to pull out, while Chevron-Texaco maintains exceptionally friendly relations with the Chávez government. Since the defeat of the general strike in 2003, some Venezuelan capitalists have moderated their stance. Gustavo Cisneros, the Rockefeller of Venezuela, has apparently made his peace with Chávez, as shown by the more even-handed reporting of his TV station Venevisión, in contrast with its earlier hostility toward the government.

Exactly how the Chávez movement defines socialism, whether large capital is to play a positive role, and whether new property relations such as cooperatives will prosper are all questions that remain unanswered. Chávez says the new “socialist” model will largely be determined on the basis of trial-and-error. He has also announced that an “ideological congress” will be held for his movement in 2007 in order to open space for the first time for discussion of ideology.

The December 3 electoral outcome is perhaps more significant than all other elections since 1998. It represents a green light for a much-needed new model for Venezuela, which may be copied elsewhere in the continent. At stake are a more equitable distribution of wealth and greater opportunities for the non-privileged. Chávez and his followers insist that the goal of social justice is intricately tied to democracy.

Chávez’s overwhelming victory after eight years in power recalls Franklin D. Roosevelt’s three re-elections as president. In both cases, personalities and style were just a part of the presidential appeal, the other being the development of a new model to face a crisis situation. With 62 percent of voters behind him, the voting abstention rate of 25 percent at a 15-year low, the intransigent opposition more isolated and discredited than ever, and his rank-and-file calling for new measures, Chávez is well positioned to deepen the process of change.