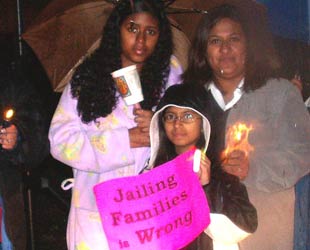 Protesters stand outside the T. Hutto Residential Center during a candlelight vigil on Christmas Eve, 2006.

Named after the co-founder of the Corrections Corporation of America (CCA), the T. Don Hutto Correctional Center in Taylor, Texas, opened as a medium-security prison in 1997. Today, the federal government pays CCA, the nation’s largest private prison company, $95 per person per day to house the detainees, who wear jail-type uniforms and live in cells.

But they have not been charged with any crimes. In fact, nearly half of its 400 or so residents are children, including infants and toddlers.

The inmates are immigrants or children of immigrants who are in deportation proceedings. Many of them are in the process of applying for political asylum, refugees from violence-plagued and impoverished countries like Honduras, Guatemala, El Salvador, Somalia and Palestine. (Since there are different procedures for Mexican immigrants, the facility houses no Mexicans.)

In the past, most of them would have been free to work and attend school as their cases moved through immigration courts. “Prior to Hutto, they were releasing people into the community,” says Nicole Porter, director of the Prison and Jail Accountability Project for the ACLU of Texas. “These are non-criminals and nonviolent individuals who have not committed any crime against the U.S. There are viable alternatives to requiring them to live in a prison setting and wear uniforms.”

But as a result of increasingly stringent immigration enforcement policies, today more than 22,000 undocumented immigrants are being detained, up from 6,785 in 1995, according to the Congressional Research Service.

Normally, men and women are detained separately and minors, if they are detained at all, live in residential facilities with social services and schools. But under the auspices of “keeping families together,” children and parents are incarcerated together at the T. Don Hutto Residential Center, as it is now called, and at a smaller facility in Berks County, Penn. Attorneys for detainees say the children are only allowed one hour of schooling, in English, and one hour of recreation per day.

In addition, there have been reports of inadequate healthcare and nutrition.

“The kids are getting sick from the food,” says Frances Valdez, a fellow at the University of Texas Law School’s Immigration Law Clinic. “It could be a psychological thing also. These are little kids, given only one hour of playtime a day, the rest of the time they’re in their pods in a contained area. There are only a few people per cell so families are separated at night. There’s a woman with two sons and two daughters; one of her sons was getting really sick at night but she couldn’t go to him because he’s in a different cell. One client was pregnant and we established there was virtually no prenatal care.”

When local staff for the League of United Latin American Citizens (LULAC) collected toys for the children at Christmas, Hutto administrators would not allow stuffed animals to be given to the children, according to LULAC national president Rosa Rosales.

“That’s what these children need–something warm to hug,” she says. “And they won’t even allow them that, why, I can’t imagine. They say they’re doing a favor by keeping families together, but this is ridiculous.”

A CCA spokesperson refers media to the San Antonio office of Immigration and Customs Enforcement (ICE), but that office did not return calls for this story.

Immigrants have been housed at the facility since last summer, and public outrage and attention from human rights groups has grown in the past few months as more people have become aware of the situation. In mid-December, Jay J. Johnson-Castro, a 60-year-old resident of Del Rio, Texas, walked 35 miles from the Capitol to the detention center, joined by activists along the way and ending in a vigil at the center.

“Everyone I have talked to about this is shocked that here on American soil we are treating helpless mothers and innocent children as prisoners,” says Johnson-Castro, who had previously walked 205 miles along the border to protest the proposed border wall. “This flies in the face of everything we claim to represent internationally.”

A coalition of attorneys, community organizations and immigrants rights groups called Texans United for Families is working to close the facility. The University of Texas Immigration Law Clinic is considering a lawsuit challenging the incarceration of children.

Valdez sees the center as a political statement by the government.

“Our country likes to detain people,” says Valdez. “I think it’s backlash for the protests that happened in the spring–like, ‘We’re going to show you that you’re not that powerful.’ It’s about power.”