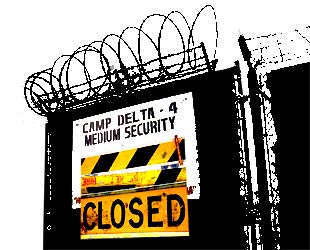 The first detainees arrived in Guantánamo four months to the day after the 9/11 attacks. From the opening of Camp X-Ray–the first site of imprisonment, notorious for its tin-roofed open-air cages–to the recently completed permanent prison known as Camp 6, critics have called for its closure. Even President Bush has said, “I'd like to end Guantánamo. I'd like it to be over with.” Yet he refuses to close it because, he says, it holds detainees who “will murder somebody if they are let out on the street.”

It's time to look at the powerful reasons to close Guantánamo, both the standard ones enumerated below–and also what may be the most compelling, if unspoken, one of all: Guantánamo must be closed because the United States needs to indicate that it has decided to change course. Closing Guantánamo will help to restore America's standing in the world and in the eyes of its own citizens.

Guantánamo Bay Naval Base was established as a coaling and naval station under U.S. control in 1903. It has no civilian legal authority (you can't get a marriage license there, and you can't be arraigned) and U.S. military authority is limited. According to the Department of Justice, the prison is not indisputably U.S. territory, nor does it necessarily fall under the jurisdiction of any foreign entity.

According to the Church Report–an official investigation of Guantánamo prepared by Vice Admiral Albert T. Church III, a former navy inspector general for the Armed Services Committee–Guantánamo's uncertain legal footing may have been a fundamental reason the administration decided to use the facility to interrogate al-Qaeda and Taliban fighters. “Perhaps most importantly,” the report states, “GTMO was considered a place where [other] benefits could be realized without the detainees having the opportunity to contest their detention in the U.S. courts.”

According to Northwestern University Professor Joseph Margulies, the administration's legal position rests on “the remarkable claim that the prisoners have no rights because they are foreign nationals detained outside the sovereign territory of the United States.” In 2004, in Rasul v. Bush, the Supreme Court ruled that U.S. courts have jurisdiction in hearing habeas corpus petitions from Guantánamo. Yet through a series of laws and military rulings, the administration has continued to argue that the prisoners do not have the right to contest their detention in a U.S. court.

#2 It violates the Geneva Conventions

Guantánamo is a prisoner-of-war camp that is not labeled as such. From the beginning, the administration took the legal position that the captives brought to Cuba were not prisoners of war, but fell into the vague, newly created legal category of “enemy combatants.”

But according to the International Committee of the Red Cross Commentary to the conventions, no such intermediate ground between civilians and prisoners of war exists: “Every person in enemy hands must have some status under international law: he is either a prisoner of war and, as such, covered by the Third Convention, a civilian covered by the Fourth Convention, [or] a member of the medical personnel of the armed forces who is covered by the First Convention. There is no intermediate status; nobody in enemy hands can fall outside the law.”

As the camp was being built, military personnel I interviewed said they knew not to use the words “prison-camp,” or “prison.” Why? Under the Geneva Conventions, a prisoner cannot be interrogated, punished, or forced to answer questions beyond rank, name and serial number.

#3 Prisoners are degraded and abused

Jumah Al Dossari, a Bahraini detainee who has been incarcerated at Gitmo for five years, wrote to his lawyer, “At Guantánamo, soldiers have assaulted me, placed me in solitary confinement, threatened to kill me, threatened to kill my daughter, and told me I will stay in Cuba for the rest of my life. They have deprived me of sleep, forced me to listen to extremely loud music and shined intense lights in my face. They have placed me in cold rooms for hours without food, drink or the ability to go to the bathroom or wash for prayers. They have wrapped me in the Israeli flag and told me there is a holy war between the Cross and the Star of David on the one hand and the Crescent on the other. They have beaten me unconscious.”

#4 Prisoners have no way to prove their innocence

Under the Constitution, every prisoner in U.S. custody has the right to legal representation and to due process, i.e. a trial (habeus corpus). Yet the detainees at Guantánamo, though afforded Combatant Status Review Tribunals, cannot have their own counsel at those hearings and have no meaningful way of contesting evidence, some of which is secret. To date, not one individual among the nearly 800 incarcerated at Guantánamo has been charged with a crime recognized under either U.S. or international law. Moreover, the Military Commissions Act (MCA) of 2006 is the latest attempt to strip captives of their right to argue their appeals in U.S. courts.

MCA is currently being challenged in two cases–al Odah v. United States of America and Boumediene v. Bush. Briefs in these cases argue that the Act is unconstitutional and that the retroactive suspension of the detainees' right of habeas corpus does not apply to pending cases. These briefs focus on the Constitution's Writ of Habeus Corpus, which states that such rights shall only be revoked at times of rebellion or invasion.

Despite the tens of thousands of hours of interrogation that have taken place at Guantánamo, very little worthwhile intelligence has been extracted. What information is left is now five years old, and it is doubtful that any Guantánamo prisoner has knowledge of a ticking bomb or a current plot.

And while the government maintains that detainees can provide a primer on jihad networks and al-Qaeda's strategic goals, at this point, the information is likely out of date. Besides, what can be extracted from individuals who, for the most part, were the wrong people to imprison in the first place.

According to a report by Seton Hall School of Law, 86 percent of detainees were arrested by Pakistan or the Northern Alliance and “handed over to the United States at a time when the United States offered large bounties for capture of suspected enemies.”

Moreover, Guantánamo's very existence has alienated potential inside sources of information. Two years ago, at a Center on Law and Security conference in Florence, Italy, two of Europe's leading terrorism magistrates pointed out that attempts to infiltrate terrorist cells had become much more difficult in the wake of rising public anger over Guantánamo.

Guantánamo has fomented that which it was created to combat–anti-American extremism and jihad.

Guantánamo is just the public face of a global network of “ghost prisons.” According to Human Rights First (formerly the Lawyers' Committee for Human Rights),the United States has acknowledged 20 detention centers in Afghanistan, in addition to the bases at Bagram and Kandahar; as a prison near the Afghan border in Kohat, Pakistan; and the al Jafr prison in Jordan. This suggests that Guantánamo may have been a smokescreen for more inhumane, less legal incarceration and interrogation practices elsewhere.

According to Armando Spataro, a senior Italian prosecutor known for his work on global terrorism, Guantánamo and the U.S. renditions policy “is extremely damaging to all our efforts to integrate our Muslim communities.” Muslims around the world are asking why there is so little international opposition to the U.S. policy of imprisonment without due process. The collateral damage of Guantánamo–the incarceration of nearly 800 individuals who are denied legal rights, who regularly report being abused and who face a lifetime of imprisonment–is incalculable. It breeds new angers and resentments, and thus new enemies.

Last March, the Department of Defense finally released the names and countries of the detainees. It turned out that many were not captured on the battlefield but picked up elsewhere in the world, in the Gambia, in Pakistan, and even in Europe. In all, persons detained in Guantánamo Bay come from 46 different nations, including Spain, France and the United Kingdom.

#7 … and alienates our allies

At a time when international solidarity is needed to confront the potent and lethal enemy of terrorism, Guantánamo has led to widespread distrust of the United States. British Prime Minister Tony Blair has called for Guantánamo's closure. And Justice Lawrence Collins, a British high court judge, has said, “America's idea of what is torture is not the same as ours and does not appear to coincide with that of most civilized nations.”

Baltasar Garzon, Spain's most prominent magistrate for crimes of terrorism, has warned, “If we continue along these lines, we are on the road to committing crimes against humanity.”

In Germany, Chancellor Angela Merkel has said, “There is no question … An institution like Guantánamo in its present form cannot and must not exist in the long term.”

Guantánamo is the single most potent symbol in the misguided war on terror. In the wake of 9/11, the United States' pledge to do everything in its power to protect its people from further harm led to a policy of overreaction. Closing Guantánamo will signal that the United States has emerged from its confusion, and regained a place among civilized nations.

We must no longer act like scared victims, willing to make any bargain with any devil to create the illusion of safety. We must reassert our confidence in the rule and wisdom of law. Enemies must be combatted with legal tools, military prowess and diplomacy–not with illegalities, bullying and walls of silence.

Research for this article was contributed by Center on Law and Security Research Fellow Francesca Laguardia.