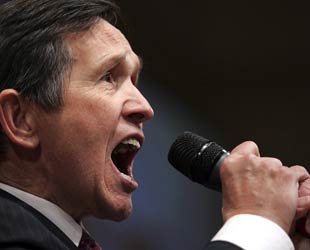 Kucinich at a rally for Sherrod Brown in November 2006 in Cleveland Heights, Ohio.

Kucinich Comes Back for 08

To his supporters, Rep. Dennis Kucinich (D-Ohio) represents the sane voice of the Democratic Party–a man who reads books, gives intelligent speeches and acts on principle. To his detractors, Kucinich is a small man on an ego trip, too radical to be elected.

Kucinich was the only Democratic candidate in the 2004 presidential primaries to vote against the war in Iraq. His 90-day plan to end the occupation was dismissed by the party’s centrist leaders and he came in fourth in the primaries–behind Kerry, Edwards and Dean. Three years later, the Iraq war has cost the lives of more than 3,000 American servicemen and untold thousands of Iraqis. And once again Kucinich, relentless in his call for withdrawing troops, is vying for the nation’s top job. “My country calls me to action,” he told a cheering crowd after announcing his candidacy on December 12 in Cleveland.

Kucinich first gained prominence in 1977 when, at age 31, he was elected mayor of Cleveland, becoming the youngest mayor ever elected in a major American city. During his campaign, Kucinich promised to save the struggling city-owned Municipal Light Co. When the company’s private competitor tried to force the city to sell, Mayor Kucinich refused. In response, the banks cut off credit and the City of Cleveland went into default. In 1979, Kucinich lost his bid for re-election. Years later, the Cleveland City Council would honor him for “having the courage and foresight to refuse to sell the city’s municipal electric system”–and saving ratepayers more than $100 million.

During his 15-year hiatus from politics, he worked as a TV commentator, media consultant, college professor and public utility consultant. Kucinich re-launched his political career in 1993, with the campaign symbol of a light bulb and the slogan, “Because he was right!” He won a seat in the Ohio state Senate in 1994 and was elected to Congress two years later.

In These Times recently spoke with Kucinich about his decision to run again for president and his position on the war.

With his proposal to escalate the war through a troop “surge,” President George W. Bush plans to dispatch 21,500 additional U.S. troops to Iraq. What effect would this have?

More war, more door-to-door fighting, more civilian casualties, an expansion of the conflict, more deaths of troops, more costs to the people of the United States, more ruination for Iraq and more instability in the region and the world. And it sets the stage for a conflict against Iran.

Daniel Ellsberg, of “Pentagon Papers” fame, told Democracy Now that he believes Bush plans to attack Iran, probably without informing Congress. Ellsberg says a similar escalation happened during the Vietnam War, when the battlefield was extended into Laos and Cambodia. Could this be possible?

The analogy is correct. I think this president is looking to expand the war. His comments about Iran and Syria were not conciliatory. He’s rattling the saber at a time when saber-rattling hurts our troops. It’s the kind of tough talk that dragged us into this war, the same braggadocio that doesn’t pass for statecraft, but shows an administration that’s out of control. Here’s a president who’s putting his foot on the accelerator as the car heads toward the cliff.

The “Kucinich Plan” proposes replacing U.S. troops with an international peacekeeping force. But after the United States ignored the world’s opposition to its invasion of Iraq, is it practical to expect European and other nations to support America now?

House Speaker Nancy Pelosi opposes sending additional troops to Iraq, but she has also said that cutting off funding for troops already there isn’t an option. How does your position differ from hers?

I have a great deal of respect for Nancy Pelosi. I think we have to give Democrats a few weeks to absorb the full impact of the president’s intentions, and to realize that it is absolutely critical to stop this administration from continuing the war. The only way to do that is for Congress to assume its power under the constitution: the power of the purse.

I am going to be presenting members of Congress and the American people with this proposition: If the cost of bringing the troops and the equipment home is in the area of $5 to $7 billion, according to the Congressional Budget Office, and if we have money in the pipeline right now, why not bring the troops home with that money? If Congress votes to appropriate another $160 billion for Iraq in the spring, we’ll essentially have given George W. Bush the money he needs to carry the war through the end of his term. That would bring the total war cost, in 2007, to $230 billion. George Bush has been unequivocal about Iraq, and anyone who’s missed this hasn’t been paying attention. He has no intention of getting out of Iraq. He intends to keep our troops there until the end of his term. And that’s a death-sentence for a lot of Americans stationed over there.

The anti-war movement hasn’t evolved much since the start of the war. Why not?

A couple of things are going on. The Bush administration has been very successful in sending out conflicting messages. If you pay attention to what the administration says, it can be very tough to organize. But if you pay attention to what they do, it’s pretty easy to organize. Because what they do is to continue to prosecute war. I think that the kind of surge we saw in public involvement in the late winter and early spring of 2003 will happen again, as the surge in troops and this escalation occurs.

The Toledo Blade has called you a “diminutive Cleveland congressman” with a “giant-sized ego.” How do you respond?

I’m not going to dignify this with a comment. There’s a war going on. People are losing their lives. And what is the Toledo Blade doing? I would ask the Toledo Blade to join me in challenging this unjust war, and to tell the people of Toledo that the war was based on lies. I would ask them to call for the troops to come home. Everything I said four years ago has become mainstream. I’m not speaking from the margins.

Besides the war, what other issues will be central to your campaign?

My campaign isn’t just about the war. I’m challenging the very idea of war as an instrument of policy. I’m saying that policies of preemption, first-strike and unilateralism are bankrupt.

It begins with an understanding that war is destructive, not only to human life, and the hopes of people, but also to budgets. My experience has told me that the United States has to return to the American city. I’m someone whose career has been heavily involved in local government. I know exactly the kind of concerns that communities have. Cities need revenue sharing again. Cities need job programs and summer job programs for young people. We need to come up with new energy policies to enable the creation of alternative energy. More money for mass transit. It’s almost like domestic policy in America is like the dark side of the moon! Nobody’s even seen it, at least not since this administration took office.

What tactical mistakes did you make in 2004?

I think that in 2004 the American people weren’t ready for the message I had–not just about Iraq, but about the imperative of taking a new approach in the world, and also focusing back on taking care of things here at home.

If we look at our capacity for transformation as a nation, we move from an American revolution to an American evolution. And the evolutionary potential of this country is not being tapped. We’re devolving. We’re going back to a time to when we were struggling for survival, when we were alone in the world. We don’t need to do that anymore! We can lead the world by example, and in cooperation.

My approach is to show people the potential of America to become a place where there are opportunities for wealth for everyone, opportunities for peace and security for everyone, and where we don’t have to fear and to worry whether people will lose their homes because they’re trying to get healthcare for a loved one, or they don’t have the resources they need to achieve their dreams. Lately our idea of governance has been all about war; we have to change that. Otherwise, we are going to lose our country. We are going to lose our democracy.

We may be at the most pivotal moment of American history, because we’re either going to change course, and reintegrate with the world community, or we’re going to be locked into a broader conflict that will become intractable. I’m determined and hopeful that we’ll take the upland course.

Daniel Sturm is a German journalist who covers underreported social and political topics in the United States and Europe. Some of his work can be seen at www.sturmstories.com. He currently lives in Athens, Ohio.