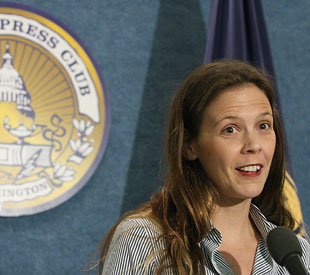 In Defense of a Free Press

Journalist Sarah Olson talks about her defiance in the face of a subpoena by the Army, the rights of U.S. journalists and what the wider context is of the Army’s court martial of First Lt. Ehren Watada

Sarah Olson, a journalist based in the San Francisco Bay area, has became a hero for Americans concerned about the erosion of press freedoms in the Bush era. On May 30, 2006, Olson interviewed Army First Lieutenant Ehren Watada, the first commissioned officer to publicly refuse deployment to Iraq, for the Web site truthout.org and Pacifica Radio. For that refusal, on Feb. 5, the Army hauled him before a military court in Fort Lewis, Washington, for a court-martial. The Army charged him with one count of “missing movement,” for refusing to deploy to Iraq, and four counts of conduct unbecoming an officer and a gentleman–two of which stem from statements he made to individual journalists regarding his opposition to the Iraq war.

To help make their case, in December, the U.S. military subpoenaed Olson to testify in Watada’s military trial, where if convicted he could face a year in jail for each of the two charges related to speaking with Olson and, on a separate occasion, Greg Kakesako of the Honolulu Star-Bulletin.

The subpoena required Olson to appear in court on behalf of the prosecution to verify Watada’s statements, even though audio files were available on the Internet. If she refused to comply, she risked a felony charge and six months in jail.

So, Olson started a campaign to challenge the subpoena. On Jan. 29, bowing to public pressure, the Army dropped the subpoena against Olson just prior to the start of the trial. The defense and the prosecution had reached a deal: Watada would verify the statements attributed to him and in response the prosecution would drop the two charges resulting from statements he made to journalists. Watada’s court-martial resulted in a mistrial on Feb. 7, when the military judge nullified the Stipulation of Facts accepted by the prosecution and the defense. A new trial will begin on March 19.

For upholding the First Amendment right to freedom of the press, Olson will receive the James Madison Award from the Society of Professional Journalists on March 13. The award is named after Madison, the fourth President of the United States and the creative force behind the First Amendment.

In These Times recently spoke with Olson about her case, its significance and the challenges currently facing defenders of the First Amendment.

A number of journalists have recently been subpoenaed to reveal their confidential sources and/or hand over unpublished material. How was your situation different?

It was a military court that subpoenaed me, rather than a civilian court. The military is the only place that I know of where people in the United States can be charged with making personal political statements. For me, that’s the biggest difference.

Why didn’t you just verify what Lt. Watada said and get it over with?

It’s a journalist’s job to report the news, not to participate in the government’s prosecution of personal political speech. These kinds of subpoenas erode the barrier between press and government. When speech itself is a crime, journalists are turned into an investigative tool of the government. It also scares journalists away from covering stories that may not be popular with the current administration.

How would you compare your situation to that of former New York Times correspondent Judith Miller?

Judy Miller’s case is about revealing confidential sources and who leaked classified information about something. Everything Lt. Watada said is on the record. So it’s not the typical framework people think of when they think of journalists being subpoenaed. This case is about preserving the right of ordinary Americans, particularly men and women in the armed services, to speak to the press without fear of retribution or censure. A number of people have suggested that the Army may be using his court-martial to send a message to the rest of the military that public opposition to the war isn’t going to be tolerated.

A lot of people are really down on Judy Miller. I can understand that because she may have done more than any other single person in the United States to help create the war in Iraq. Her consistently bad reporting and unwillingness to verify the accuracy of the things she was saying is one of the reasons that we’re in the war today. America’s threshold for bringing journalists into court has been significantly lowered in part because of Judy Miller.

Josh Wolf, another Bay Area-based media worker, is in jail for refusing to hand over his unpublished material. Do you think your victory is relevant to his case?

I certainly hope to raise awareness about his case. Josh was working as an independent videographer–he sold his footage of a San Francisco protest against the G8 Summit in 2005 to the local news–and the local/federal law enforcement agencies wanted his unpublished outtakes. That’s totally protected under the California state shield law. [The shield law protects a journalist from being held in contempt of court for refusing to disclose unpublished information that was gathered for news purposes, whether the source is confidential or not.] The prosecutor got around that by convening a federal grand jury, saying that a cop car allegedly set on fire during the protest was purchased in part by federal dollars.

On Feb. 6, he broke the record for the longest number of days that a journalist in the United States has been incarcerated for not handing over his unpublished material to a federal grand jury. It’s possible that Josh will continue to sit in prison after having broken no law whatsoever, which is an infuriating and gross injustice.

Lisa Sousa is a media activist with StreetLevel TV in San Francisco.