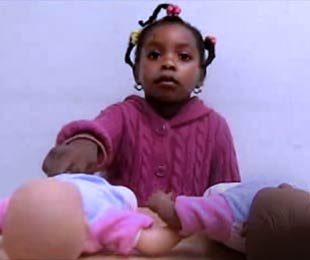 The doll test: this little girl, like three out of four black children, chose the white doll over the black one (from A Girl Like Me)

On February 10, the short documentary A Girl Like Me, about the pressures faced by young black females living in a white-dominated society, hit number one on YouTube.com’s featured videos. One of the interviewees, Jennifer, 18, looks straight into the camera and confesses: “Since I was young, I considered being lighter [skinned] as … more beautiful than being dark skinned. … I used to think of myself as ugly because I was dark skinned.”

The film, which had been viewed more than 450,000 times as In These Times went to press, gave voice to a population that is often talked about but rarely heard from, much less listened to. A new University of Chicago study examining the experience of black youth in post-civil rights America plans to change that.

“I talk about the two Bills — Bill O’Reilly and Bill Cosby — who are both willing to talk about and demean young black people. [I thought] it would be interesting and important to actually have a study where young black people get to speak for themselves,” says Cathy Cohen, a University of Chicago political science professor and lead researcher of the Black Youth Project, which was released in early February.

“We want to interrupt this narrative of young black people, even for a moment or two, so we can really think through how we can empower their voices and empower them, so they and we can better their lives,” Cohen says.

The team of researchers surveyed almost 1,600 black, Latino and white youth aged 15 to 25 from several Midwestern cities, and conducted in-depth interviews with 40 black youth. The study exposes the complex attitudes and behaviors of these groups when it comes to sex, hip hop and politics.

“I’ve been a little surprised at how many people have said, ‘Wow, [black youth] are really thoughtful,’ or, ‘Oh my god, they really have positions on policy,’” Cohen says. “Well, they’re the targets of these policies. Yeah, they have positions.”

For example, 93 percent of black youth believe that sex education should be mandatory in high schools, and 76 percent think the government should stop funding only abstinence programs. And while almost half of black youth believe that abortion is always wrong, nearly 60 percent think that abortion should be legal in some circumstances.

The project also reports that while more than 70 percent of black and Latino youth feel they “have the knowledge and skills necessary to participate in politics,” more than half believe the government “cares little about them.”

Sixty-eight percent of black youth believe that the government would do more to cure AIDS if more white people were afflicted with the disease.

“Even though some people will celebrate the end of Jim Crow and legal segregation,” says Cohen, “these young people are very clear that in their daily lives … they perceive young black people to experience very high levels of discrimination.” Almost 70 percent of black youth reported that they had been discriminated against due to their race, and large majorities of all youth believed that “on average, the police discriminate much more against black youth than they do against white youth.”

When it comes to music, 58 percent of black youth report listening to rap everyday, but even greater majorities (92 percent of females and 74 percent of males) think rap music videos portray black women offensively. In the project’s third stage, which begins this spring, researchers will perform thorough content analyses of the top rap songs of the past 10 years.

Kyle Myhre, a hip-hop MC and project coordinator for the University of Wisconsin-Madison’s Diversity Education Program, says the report is “an important piece of the puzzle. Any large-scale social change … needs to be a multi-tiered assault. There need to be academic studies, but there also need to be community organizers and a media that can cover things properly.”

Cohen says she plans on reaching out to those people, disseminating the study’s findings to community leaders, educators and policy makers, in the hope that the study will be “used in classrooms, by community organizers and by youth advocates.”

“It would be nice if one of the presidential candidates, maybe Sen. Obama, would comment on and … listen to young black people,” Cohen says. “And not just listen, but take their positions seriously; vote their voices in policy positions and make them a central component in evaluating how well this democracy is working.”

She also hopes the study will draw attention to arenas where young people are already speaking out, such as spoken word poetry, underground hip-hop and independent films, such as A Girl Like Me.

“The question is,” says Cohen, “will people listen to what they have to say?”