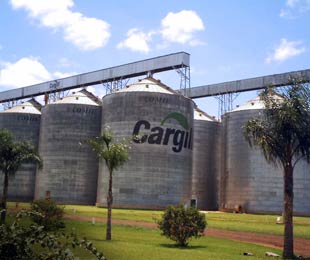 "Once, many companies owned silos in Paraquay," says Angelica Ramirez. "Now they are all Cargill."

Rural eastern Paraguay used to be full of jungle, small farms, schools and wildlife. Now it is a green sea of soybeans. The families, trees and birds are gone. The schools are empty. The air is filled with the toxic stench of the pesticides like paraquat and 2,4-D used to protect the soy crops.

We drove through the sea of soy on a red dirt road. Meriton Ramírez was bringing us to the former community of Minga Porá, to the farm where his family used to live. Ramírez is a member of the Asociación de Agricultores de Alto Paraná (ASAGRAPA), a farmer’s union spearheading the fight against the expansion of the soy industry.

“I didn’t want to leave. I built my farm and raised my children here. I planted fruit trees. For the first time in my life I had good land,” Meriton says, motioning to the vacant space that used to be his home. “Then the soy farmers arrived and we couldn’t stand the fumigation.” As he walks through the few trees left that his children had planted, he says, “The days following a fumigation we had terrible headaches, nausea and skin rashes, problems seeing, respiratory infections. The chickens died. The cows aborted their calves and their milk dried up.” His crops perished along with his animals. In 2001, when Meriton and his family left the land they had occupied to farm, their old neighborhood had been reduced to nothing but soy fields.

In the mid ’90s, if the pesticides didn’t drive the farmers from their land, the soy industry stepped in with offers to buy or rent the land. ASAGRAPA members told us that when farmers refused to convert or sell, thugs showed up to convince them to grow soy or leave. “If you tried to resist, they’d kill you,” Angélica Ramírez, Meriton’s daughter, says. Minga Porá, once a community of several thousand farmers, is now a home to only 30 families.

Soy production has increased exponentially in recent years due to rising demand worldwide for meat and cattle feed, as well as the booming biodiesel industry. Industrial soy is directed toward these markets, not the production of food for humans. In 1999, 44 million acres of soy were grown in South America; by 2004 this had more than doubled to 94 million acres. In the past six years, annual expansion of land cultivated for soy in Argentina, Brazil and Paraguay has exceeded 10 percent, mainly at the expense of rainforest and savannah.

Paraguay is the world’s fourth-largest exporter of soybeans. In 2003, 5 million acres of land were devoted to soy cultivation–more than double the amount of 10 years ago. If the current trends continue, by 2020 the global demand for soy will rise by 60 percent. The projected increase translates into 370 million acres of cultivated land devoted to soy, and in Latin America an additional 54 million acres of forests and savannah destroyed.

Managing this gargantuan agro-industry are transnational seed and agro-chemical companies like Monsanto, Pioneer, Syngenta, Dupont, Cargill, Archer Daniels Midland (ADM) and Bunge. All have become household names in Paraguay. In June 2006, the chief executive of Cargill told the New York Times that the biofuel industry is a “gold rush.” International financial institutions and development banks have promoted and bankrolled the agro-export of monoculture crops. Cargill is a main beneficiary of WTO trade policies that grant increased subsidies to agribusiness and tax credits to refiners involved in biofuel production. ADM, whose stock price and profits have more than doubled since 2003, is another big player in Paraguay.

While Al Gore stresses that biofuels are good for the environment (and evidently, business), two recent studies suggest otherwise. Researchers at the University of Minnesota caution that bio-fuels raise a host of land use issues, while a joint-study by scientists at Cornell University and the University of California-Berkeley concluded that both current and to-be-developed biofuels produce less energy than is consumed in growing and processing the crops. According to their study, biodiesel from soy results in a net energy loss of 27 percent.

Traditional Paraguayan agriculture is small-scale and based on a variety of crops, such as yucca, corn, beans and potatoes, and livestock, such as chickens, pigs and cows. Campesinos (small farmers) plant fruit trees to shade their houses and their crops during the blistering summers. “We knew the Brazilians weren’t going to live on their land,” Meriton says about the owners of the soy business near his home, “because they never planted any trees.”

In Paraguay and Brazil, the soy industry is made possible by large-scale deforestation. While statistics are unavailable for Paraguay, a recent World Wildlife Fund report for the International Energy Agency reveals that 80 percent of Brazil’s greenhouse gas emissions come from deforestation. Official figures released in fall of 2006 show that during the 2005 logging season a forested area about the size of Hawaii was cut. A 2006 NASA study found that in 2003 more than 20 percent of the forests in the Brazilian state of Mato Grosso had been converted to cropland. The last agricultural census in Paraguay was taken in 1991, making statistics about the how much of that deforested land is used to plant soy guesswork at best. Embedded carbon dioxide is released when forests are cut down and the harvested wood is burned. An acre of land can absorb nearly twice as much CO2 by remaining forested than it can when used to grow biofuel crops. This outweighs any climate advantage advertised by biofuel production.

The biologically diverse Interior Atlantic Forest once covered 85 percent of eastern Paraguay. Due to isolation and difficult access, Paraguay was once a refuge for an estimated 7,000 to 8,000 species, including rare and endangered flora and fauna such as the giant otter and the South American tapir. However, by 1991, high rates of deforestation (higher than that of any other South American country in the ’90s) reduced Paraguay’s forest by more than 80 percent. The deforestation has accelerated since, largely due to agricultural expansion. Today even the most liberal estimates suggest that no more than 12 percent of the original forest cover remains, and the general consensus is 5 to 8 percent.

Besides clearing land for agriculture, the soy industry is also harvesting forests for fuel. More than half of fuel wood consumed in Paraguay goes toward producing soybean oil, sugar, cement and coal. According to Angélica Ramírez, an environmental studies student in the agronomy department of the University of Ciudad del Este in Paraguay, this includes Cargill’s oil-expelling plants.

Then there is the environmental problem caused by pesticides. “The soy workers also wash their machines in the river after spraying [pesticides],” she says. “Combined with the agricultural run-off, this means that there are no fish left in our rivers, and the water is completely contaminated.”

“The poison never gives us a rest”

Paraguay has the most unequal land distribution in Latin America, with 95 percent of the land under private ownership in large estates. An incomplete and corrupt agrarian reform has left most campesinos landless, occupying unused land for subsistence farming. In Paraguay especially, the expansion of the soy industry has occurred in tandem with violent oppression of small farmers and indigenous communities. Farmers have been bullied into growing soy with pesticides, at the cost of their food crops and subsequently their farms. Since the first soy boom, the industry has evicted almost 100,000 small farmers from their homes and fields and forced the relocation of countless indigenous communities. More than 100 campesino leaders have been assassinated, and more than 2,000 others have faced trumped-up charges for their resistance.

But there is often no need for thugs. Soy cultivation dumps more than 24 million liters of agro-chemicals in Paraguay every year, including World Health Organization Class I and II extremely and moderately hazardous pesticides. These include Paraquat, a chemical with no antidote if ingested, 2,4-D, Gramoxone, Metamidofos, which has proven to reduce sperm count and health in exposed males, and Endosulfan, a teratogenic substance that causes birth defects in the infants of repeatedly exposed mothers, according to the EPA. The Paraguayans we spoke with didn’t use the terms pesticide or herbicide; they called the chemicals “venenos,” venoms or poisons.

As we drove though the soy fields, a terrible smell often forced us to cover our noses and eyes. “That’s the venom,” says Angélica Ramírez.

“How would you describe the smell?” we ask.

Leonida Laivas is Meriton Ramírez’s old neighbor. Her land is a tiny island of trees in the sea of soy that is now Minga Porá. Her entire family suffers from stomach pains, headaches and sight problems due to the pesticides. “The poison never gives us a rest,” she says. “Just yesterday the tractors came to spray the soy crops, and the wind blew it all over us. The water is full of poison too and gives us nausea and diarrhea.” In the nearby town of San Isidro, cancer rates are high and several children have been born with malformed limbs.

Petrona Villasboa, who lives in the southern state of Itapua, Paraguay, has become an internationally known symbol of resistance to the dangers of the soy industry. In 2003, her 11-year-old son Silvino died after he was caught in a cloud of the Monsanto herbicide cocktail Roundup from a crop duster on his way home from school. Villasboa pressed charges, but even after sentencing, subsequent appeals and lack of enforcement have left the owners at home and using the same chemicals. Villasboa is determined to see them in jail.

“I’m not doing this just for Silvino,” she says “but because there are lots of kids left who are still alive. So many people have died in our community, and people said nothing”

Villasboa isn’t the only one saying something today. The Ramírez family now lives in another community, with another vision. El Triunfo is a community formed by farmers involved in ASAGRAPA, and is designed to prove that small-scale, non-chemical agriculture is possible. The land is communally owned and farmers aren’t allowed to sell their land.

“There has to be a change,” ASAGRAPA President Tomás Zayas says. “Because if not, we are facing the end of the Paraguayan campesino.”

April Howard is a teacher and a journalist.

Benjamin Dangl is the author of The Price of Fire: Resource Wars and Social Movements in Bolivia, AK Press, 2007. Both are editors at UpsideDownWorld.org, a Latin American news Web site.