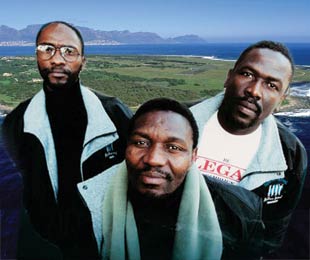 These lyrics are among the many that sustained Shezi, Sithole and Nxumalo during their multi-year stay at the infamous Robben Island Prison. As participants in the anti-apartheid struggle, they, along with thousands of other dissidents were jailed in the ’70s and ’80s on Robben Island, a small rocky island off the southwest coast of South Africa. The three men were incarcerated for their involvement in the African National Congress’s (ANC) armed wing, the Umkhonto we Sizwe (or MK), which means “Spear of the Nation.” Now, they are trying to keep the legacy of that struggle alive for the generation born after the end of apartheid in the early ’90s.

“We would use songs to ease our hunger,” Sithole tells a crowd of mostly African-American high school students at Chicago Academy High School during a February visit to the city. He described how the prisoners would often get only one bowl of gruel per day, which, though scalding hot, they had to eat with their hands until a hard-fought campaign forced their jailers to give them spoons.

“We spent most of our time in prison struggling to improve prison conditions,” says Shezi, jailed in 1980 for 10 years after being charged with illegally leaving the country and membership in the banned ANC. “We were always studying politics and holding political classes and debates.”

Located about 8 miles off the coast of Cape Town across a turbulent ocean strait, Robben Island was used as a hospital for leprosy patients and the mentally ill in the 1800s and early 1900s, and a military base during World War II. It has been used as a prison since the mid-1600s. Its inmates have included everyone from indigenous African leaders and Muslims from the East Indies to Dutch and British soldiers and civilians. Most infamously, it was the repository for anti-apartheid activists, including Nelson Mandela, who became the first democratically elected president after the fall of apartheid, and Pan Africanist Congress founder Robert Mangaliso Sobukwe.

In 1997, the former prison was turned into a museum and historical institute that aims to keep the stories of anti-apartheid activists and other political prisoners alive. A comprehensive electronic database of former prisoners is being compiled, and the museum holds an extensive collection of prison artifacts and former prisoners’ belongings and writings, including testimony of more than 200 former prisoners. Its archive of prisoners’ papers, including letters, internal correspondence, minutes of meetings, reports, political discussion papers, recreation plans and equipment orders, is called the “Apple Box Archives,” because when prisoners were released, the last of them in 1991, they carried their possessions in apple boxes.

The museum’s Web site describes the island today as a symbol “of oppression, as well as a place of triumph.” It continues: “Overcoming opposition from the prison authorities, prisoners on the Island after the ’60s were able to organize sporting events, political debates and educational programs, and to assert their right to be treated as human beings, with dignity and equality. They were able to help the country establish the foundations of our modern democracy.”

The museum has published four books detailing prisoners’ memories and three albums of prison music, including Prison Songs: Cell Stories, the project which brought Shezi, Sithole and Nxumalo together.

Jeff Spitz, a Chicago-based filmmaker, bought Prison Songs on CD in 2001 when he was in Cape Town screening his documentary The Return of Navajo Boy, which details the toxic legacy of uranium mining in Navajo lands in the southwestern United States. Intrigued and disturbed that he had never heard of Robben Island, Spitz tracked the men down. He convinced them to come to the United States in 2002 for a performance at the Chicago Field Museum and began filming a documentary, along with South African filmmaker Mickey Madoda Dube, about the singers’ lives and music.

One performance at the Robben Island Museum and the two Midwestern trips are still the only times the men have performed together in public. But they have vowed to bring their music to a wider audience, ideally performing their songs and sharing their stories in other U.S. cities, other countries and, most importantly, within South Africa.

“Youth has a way of moving on, moving fast and ignoring their parents,” says Spitz, co-founder of Groundswell Educational Films. “Kids in South Africa are big on MTV and American music and their own hip hop culture. Like kids anywhere, they’re not real keen to look back.”

Shezi, 50, lives in the cottage on Robben Island that was once home to a prison guard. He works for the Robben Island Museum, tracking down and filming former prisoners for the museum archives. Sithole, 50, who previously worked as a museum guide, is now unemployed and lives in a poor township outside Durban. Nxumalo, 49, who was imprisoned for 13 years, lives in an upscale, formerly white-only Durban suburb. He works for a company that builds roads in rural areas.

Spitz sees the men’s current situations as a microcosm of the way life has played out in post-apartheid South Africa, where most blacks still live in poverty and isolation. “Ordinary people in South Africa still live under economic apartheid,” Spitz says. “Of these three guys who fought and sacrificed years of their lives for freedom and the chance to participate in their own country’s economy, one is a rich man, one is unemployed and one is a cameraman.”

Spitz and Dube hope their documentary will help educate U.S. youth about one of the world’s more recent legendary struggles against racism and oppression. At Chicago Academy High School, a student asks, “What did y’all do to get put in jail,” seemingly baffled by their stories of covert military training in neighboring African countries and charges of treason.

“We could no longer fight with guns and spears. We had to form modern organizations to fight white people as equals,” says Sithole. “The tribes, which used to all be separate, united against a common enemy, since we knew we couldn’t defeat the white people on our own.”

The group’s recent three-week midwestern tour included visits to a handful of elementary schools, high schools and cultural centers in Chicago and East St. Louis, Ill., along with performances at the University of Illinois at Chicago and St. Sabina Catholic Church on the south side of Chicago, known for its social activism.

Asked whether Chicago, one of the country’s most segregated cities, reminds him of the apartheid era, Shezi declines to pass judgment. “To make a big comment like that is difficult, because it’s like looking through a window without seeing the other parts of the room inside,” he says.

But in regard to East St. Louis, a 97 percent black city where 35 percent of the population lives below the poverty line, Shezi couldn’t help but draw a comparison. “That’s a real problem of infrastructure,” he says of the city, where the singers visited an elementary school named after Mandela. “It has some similarities to our situation.”

Shezi hopes that stories about the struggle against apartheid can help inspire young people in East St. Louis, Chicago’s west side and other disenfranchised areas to stand up for their own rights.

“Struggle is like a flower: If you don’t cultivate the soil, it will not bloom,” he says. “We need to go to the schools, we need to continue this infinite process where we educate each new generation.”