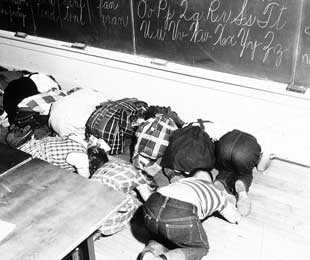 Only days before the fifth anniversary of September 11, President George W. Bush addressed military officers in Washington to warn that nuclear-armed terrorists could “blackmail the free world and spread their ideologies of hate and raise a moral threat to America.” This alarmist vision was accompanied by the White House’s release of “A National Strategy for Combating Terrorism,” which painted a picture of a “troubling potential WMD terrorism nexus emanating from Tehran.” The administration is building the case for war against Iran–a job made easier by President Mahmoud Ahmadinejad’s recent announcement that Iran can now enrich uranium on an industrial scale–despite the fact that many Iran-watchers and nuclear experts consider their claims of enrichment capacity to be an overblown boast.

This is not the first time the “no-nuclear-weapons-for-you” ploy has been used to lay the groundwork for a war. On Oct. 7, 2002, while making the case for regime change in Iraq, President Bush said: “America must not ignore the threat gathering against us. Facing clear evidence of peril, we cannot wait for the final proof–the smoking gun–that could come in the form of a mushroom cloud.” Yellow cake, aluminum tubes and histrionics about Saddam Hussein’s nuclear capabilities followed … all of which were challenged at the time, and have turned out to be completely fabricated. And, when not grinding the axe of pre-emptive war as counter-proliferation strategy, the administration periodically raises the specter of nuclear terrorism, in the form of dirty bombs and suitcase-sized warheads.

But while the United States demands that other countries end their nuclear programs, the Bush administration is busy planning a new generation of nuclear weapons. Nearly 20 years after the Berlin Wall crumbled, the United States is allocating more funding, on average, to nuclear weapons than during the Cold War. The Bush administration is pumping this money–more than $6 billion this year–into renovating the nuclear weapons complex and designing new nuclear weapons. Such hypocrisy is one of the main obstacles to nuclear arms reductions because it runs the risk of shattering the 1970 Nuclear Nonproliferation Treaty in which the nuclear-armed states pledged to begin the process of disarmament if the non-nuclear states opted not to pursue the deadly technology.

The centerpiece of the administration’s move toward developing a new generation of nuclear weapons is “Complex 2030,” a multiyear plan introduced last April by the National Nuclear Security Administration (the semi-autonomous agency within the Department of Energy that oversees the nuclear weapons program). Complex 2030 calls for the construction of new or upgraded facilities at each of the National Nuclear Security Administration’s eight nuclear weapons-related sites throughout the country. The plan also calls for building a new nuclear weapon, the Reliable Replacement Warhead (RRW), inside the old warheads. The program was conceived in response to concerns that the cores of existing nuclear weapons could be wearing out and need to be replaced. But RRW development has gone much further than that.

The Department of Energy (DOE) notes in its summary of Complex 2030 that one of the major goals of the program is to “improve the capability to design, develop, certify and complete production of new or adapted warheads in the event of new military requirements.” In short, while the Bush administration has publicly stressed reductions in nuclear weapons, it is working to produce new, more usable nuclear weapons.

As a candidate for president in 2000, and during his first months in office, Bush suggested that the United States should significantly cut its nuclear arsenal. In his first address before a joint session of Congress, the new president went so far as to pledge: “We can discard Cold War relics and reduce our own nuclear forces to reflect today’s needs.” He followed through on this promise with the 2002 Strategic Offensive Reductions Treaty (SORT), which calls for reducing the U.S. and Russian nuclear arsenals from 6,000 each–the limit established under the 1991 Strategic Arms Reduction Treaty–to between 1,700 and 2,200 warheads each over a 10-year period.

Presidents Bush and Putin signed the treaty at Konstantin Palace in St. Petersburg right after the city celebrated its 300th birthday in June 2003. Also known as the Treaty of Moscow, SORT has serious flaws. It has no method for verifying that each side is meeting its commitments; the cuts are not permanent–neither side is obligated to destroy or dismantle the warheads, only to take them “off-line;” and both sides would have to agree to extend the treaty if they have not met their obligations by the time the treaty expires in 2012. After the Senate unanimously voted to ratify the treaty, Sen. John Kerry (D-Mass.) called it “as flimsy a treaty as the Senate has ever considered.” Yet even with these flaws, SORT establishes important benchmarks and offers the potential of trust-building between the former superpower rivals.

Another positive development occurred in mid-February, when the Bush administration, after years of work through the “six party talks,” announced a deal with North Korea. The hermit nation agreed to take the first steps toward dismantling its nuclear program in exchange for large supplies of fuel oil and eventual political recognition. The first phase of the agreement calls for North Korea to take concrete steps within 60 days, including closing down its nuclear reactor at Yongbyon, getting inspectors from the International Atomic Energy Agency on the ground, and beginning to reveal the locations of its other nuclear facilities. In exchange, it will receive 50,000 tons of fuel oil at the end of the 60-day period. The agreement demonstrates that the Bush administration is slowly learning the nuances of diplomacy–you have to give to get.

More good news surrounds the recent fate of the Robust Nuclear Earth Penetrator (RNEP). One of the most controversial new weapon designs proposed by the nuclear weapons complex, the RNEP promised to destroy hardened and deeply buried targets, such as underground bunkers containing chemical and biological weapons and military command centers. Such a difficult challenge would necessitate decades of steady and climbing investment, making it the kind of techno-fantasy that the nuclear weapons complex of the future would love to tackle.

In 2003, Congress allocated $15 million to study the RNEP. But in 2004 and 2005, Rep. David Hobson (R-Ohio), then chair of the Water and Energy Subcommittee of the House Appropriations Committee, led successful fights to defund the RNEP. Later, he boasted: “It’s dead, forget about it! Go conventional. If I have to kick it three or four times, I’m going to keep kicking at it until we think we’ve totally gotten it out of the way.”

The Bush administration has aggressively counteracted these small positive developments with a succession of negative and destabilizing actions and statements–the most significant of which is the assertion that nuclear weapons are a central component of U.S. military and political strategy. This stunner was concealed within the administration’s 2002 Nuclear Posture Review (NPR), a Pentagon report that relies on input from the Joint Chiefs and the armed services to define the role of nuclear weapons in U.S. security. The final classified report concluded that nuclear weapons “play a critical role in the defense capabilities of the United States, its allies and friends.”

Submitted to Congress in January 2002, the NPR was not made public until portions were leaked to the press two months later. It states, “The need is clear for a revitalized nuclear weapons complex that will … be able, if directed, to design, develop, manufacture and certify new warheads in response to new national requirements; and maintain readiness to resume underground testing if required.”

The NPR introduces the concept of a “new Triad,” composed of nuclear and non-nuclear strike capabilities, defensive systems, and “responsive infrastructure” for maintaining and/or producing nuclear weapons as requested. The report also emphasizes the development of creative new nuclear weapons–like low-yield or surgical warheads that are able to “reduce collateral damage,” and nuclear bombs with “earth penetrating” capabilities.

The NPR concluded that nuclear weapons “provide credible military options to deter a wide range of threats, including WMD and large-scale conventional military force.” The Bush NPR explicitly named potential targets–Iran, Syria, North Korea, China and Russia. The review explained that the United States might use nuclear weapons to retaliate for the use of chemical or biological weapons against U.S. targets, as the ultimate tool in a military conflict over Taiwan, or, disturbingly, as a response to undefined “surprising developments.”

During the Cold War, spending on nuclear weapons averaged $4.2 billion a year. When the Cold War ended, DOE officials and members of Congress imagined the conversion of the nuclear weapons complex. But innovative proposals for civilian or green technology labs never got off the ground, and the nuclear labs successfully lobbied Congress for a new infusion of weapons money. By the end of President Clinton’s tenure, nuclear weapons activities within the DOE’s annual budget had jumped to $5.2 billion–more than the Cold War average, but less than what the new Bush administration would say it needed.

Since then, spending on nuclear weapons has increased by almost 14 percent to a 2007 total of $6.4 billion (after adjustment for inflation), but it is not enough to satisfy a nuclear-obsessed administration. The National Nuclear Security Administration (NNSA), formed in 2000 to manage the nation’s nuclear weapons complex within the DOE, has a five-year “National Security Plan” that calls for annual increases that will push the nuclear weapons budget to $7.4 billion by 2012.

Compare these significant increases in nuclear spending to what the DOE is allocating for non-proliferation and prevention of nuclear conflict. The NNSA spends more than nine times more on “Atomic Energy Defense Activities”–a category that includes nuclear weapons, naval nuclear reactors and environmental cleanup at military nuclear facilities–than it does on nuclear arms reductions and non-proliferation.

In addition, spending on nuclear weapons research, development and maintenance in the DOE budget far outpaces the funding devoted to the development of alternative energy sources, a critical need in the age of global warming and dwindling oil supplies. The DOE’s proposed budget for “Energy Efficiency and Renewable Energy”–which includes non-nuclear, non-fossil fuel forms of energy–is $1.2 billion for FY 2008, one-thirteenth of expenditures on “Atomic Energy Defense Activities.”