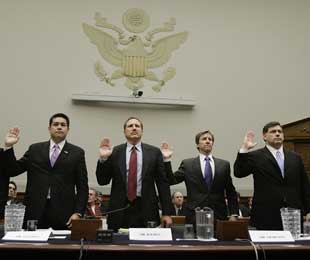 The Fraudulence of Voter Fraud

On April 6, 2006, in Washington, D.C., Karl Rove gave a speech to the Republican National Lawyers Association and issued this dire warning:

We are, in some parts of the country, I’m afraid to say, beginning to look like we have elections like those run in countries where the guys in charge are, you know, colonels in mirrored sunglasses. I mean, it’s a real problem, and I appreciate all that you’re doing in those hot spots around the country to ensure that the ballot–the integrity of the ballot–is protected, because it’s important to our democracy.

When Rove talks about protecting “ballot integrity,” that is shorthand for disenfranchising Democratic Party voters. Over the last several years, the Justice Department, with the help of White House operatives, has sought to boost GOP electoral fortunes by orchestrating a national campaign against voter fraud. But the administration overreached on Dec. 7, when President George W. Bush fired eight U.S. attorneys, a political scandal that some say could become this president’s Watergate.

When Republicans talk about voter fraud they are referring to illegal voting by individuals, as opposed to vote fraud–systematic attempts to steal an election by an organized group of partisans. This emphasis on voter fraud has convinced eight states to pass laws requiring voters to present official photo identification in order to cast a ballot–laws that studies have shown suppress Democratic turnout among voters who are poor, black, Latino, Asian-American or disabled.

Understanding that one way to win closely contested elections is to keep Democratic voters away from the polls, the Republican Party has tried to stoke public fears of voter fraud. On Feb. 15, 2005, the U.S. Senate Republican Policy Committee issued a report, “Putting an End to Voter Fraud,” which said, “Voter fraud continues to plague our nation’s federal elections, diluting and canceling out the lawful votes of the vast majority of Americans.” To remedy the situation, the Senate Republicans advised Congress to “require that voters at the polls show photo identification.”

But voting experts maintain that voter fraud is not a national problem. In March, Lorraine C. Minnite, a professor of political science at Columbia University, released “The Politics of Voter Fraud,” a report she prepared for Project Vote, an advocacy group based in Arkansas. She writes:

The claim that voter fraud threatens the integrity of American elections is itself a fraud. It is being used to persuade the public that deceitful and criminal voters are manipulating the electoral system. … The exaggerated fear of voter fraud has a long history of scuttling efforts to make voting easier and more inclusive, especially for marginalized groups in American society. With renewed partisan vigor, fantasies of fraud are being spun again to undo some of the progress America has made lowering barriers to vote.

What’s more, despite GOP claims to the contrary, voter fraud is a very rare occurrence. In 2002 the Justice Department established the Ballot Access and Voting Integrity Initiative to ferret out fraudulent voters. On Oct. 4, 2005, Attorney General Alberto Gonzales, with great fanfare, proclaimed, “We’ve made enforcement of election fraud and corrupting offenses a top priority.” Yet according to an April 12 New York Times article, only 120 people have been charged with the crime over the past five years, leading to 86 convictions. Furthermore, the Times noted, federal attorneys say that most of the transgressions have been mistakes by immigrants and felons who simply misunderstood eligibility requirements.

The extent of voter fraud is further complicated by the fact that earlier this year the Election Assistance Commission changed the conclusions of a report it had commissioned. The original report by outside election experts concluded, “There is widespread but not unanimous agreement that there is little polling place fraud.” The commission deleted that sentence and replaced it with, “There is a great deal of debate on the pervasiveness of fraud.”

Rep. José Serrano (D.-N.Y.), who chairs the House Appropriations subcommittee that oversees the commission, is disturbed by this apparently politically motivated substitution. He told In These Times:

This possibly could be another Watergate. We have to ask the questions, “Why was this report doctored, and how does this play into the larger picture of voter suppression and intimidation?” By directing public attention to voter fraud you divert attention from the fact that Americans in certain communities are not able to cast their votes properly and that their votes are not being counted. Is this something that this small new agency thought of by themselves or did they get marching orders from somewhere else, perhaps as far up as the White House?

It appears that, under Rove’s direction the White House has been planning to use U.S. attorneys to fan national fears of voter fraud. In his speech to the GOP lawyers, Rove listed 11 states that would play a pivotal role in the 2008 elections. Since 2005, Bush has appointed new U.S. attorneys in nine of those states: Florida, Colorado, Wisconsin, Minnesota, Iowa, Michigan, Nevada, Arkansas and New Mexico.

What’s more, the firings of U.S. attorneys in New Mexico, Arkansas and Washington appear directly related to this Republican plan to exploit the issue of voter fraud and suppress Democratic turnout.

On March 6, McKay testified before the Senate that after the election Republicans pressured him to open an investigation. He said his office had examined the allegations of voter fraud and decided there was not enough evidence to pursue a case.

“Had anyone at the Justice Department or the White House ordered me to pursue any matter criminally in the 2004 governor’s election, I would have resigned,” McKay told the Seattle Times. “There was no evidence, and I am not going to drag innocent people in front of a grand jury.”

In New Mexico, David C. Iglesias was equally suspect in the eyes of the GOP. Recall that in 2000, Gore beat Bush by 377 votes in New Mexico. Consequently, in 2004, Democrat-affiliated groups initiated voter registration campaigns in New Mexico. As a result, two boys, age 13 and 15, received voter cards in the mail. Iglesias responded by setting up a bipartisan task force to investigate. This didn’t satisfy attorney Mickey D. Barnett, who represented the 2004 Bush-Cheney campaign in New Mexico. He told Iglesias he should bring federal charges against a canvasser who forged their signatures, which he refused to do.

What the critics, who don’t have any experience as prosecutors, have asserted is reprehensible–namely that I should have proceeded without having proof beyond a reasonable doubt. The public has a right to believe that prosecution decisions are made on legal, not political grounds.

The issue of fraudulent voters undermining American democracy did not spontaneously erupt. To promote national concern about voter fraud, in March 2005 GOP operatives with ties to the White House established a 501(c)4 organization called the American Center for Voting Rights Legislative Fund (ACVR). The group went public by establishing a Web site, ac4vr.com. (The site has since been taken down for unknown reasons.)