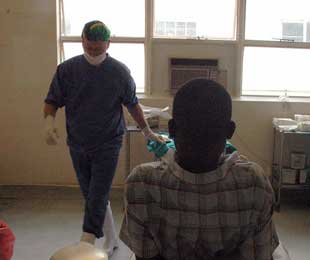 Should results of African AIDS study be applied in the United States?

The last time circumcision made headlines in New York City, the city Department of Health and Mental Hygiene was objecting to an ultra-Orthodox Jewish practice in which mohels–professional circumcisers–sucked blood out of the wounds of newly cut infants. After three babies contracted herpes, the city tried to ban the obscure ritual in 2005, provoking an angry response from the Orthodox community and a media dust-up.

Now circumcision is news again in New York, but this time the city is promoting the practice. The April 5 New York Times reported that the city health department has decided to encourage male circumcision as an HIV-prevention method among at-risk populations, particularly gay and African-American men. The move comes after several clinical studies in Africa showed that circumcision of an adult male can decrease his likelihood of infection by as much as 60 percent.

But New York’s campaign brings up thorny questions for AIDS researchers and activists. Many are concerned about extrapolating prevention methods for American high-risk men, many of whom are bisexual or gay, from the African circumcision studies, which were conducted primarily among heterosexual groups. Meanwhile, others question how a male partner’s circumcision affects a woman’s susceptibility to HIV.

Two decades of research show women are less likely to contract a variety of sexually transmitted infections when their male partners are circumcised. But a recent Johns Hopkins University study examining 997 men in Uganda found that their female partners were more likely to contract HIV following a circumcision if the men ignored doctors’ orders to abstain from sex until their wounds were fully healed, which usually takes about a month. And with the continued lack of a female-controlled HIV-prevention method–microbicide gels have yet to advance out of the trial phase–any HIV education effort must include a heavy emphasis on condom use. Spokespeople for the New York City Department of Health and Mental Hygiene and the Health and Hospital Corporation, which operates public clinics and hospitals in the city, say the city hasn’t established any formal procedures for encouraging HIV-testing prior to circumcision in light of women’s increased risk, but stress that any public circumcision efforts will be just one part of a multi-pronged HIV-prevention program.

Cultural stigma against circumcision also remains, especially among immigrant groups like Caribbean Americans. Though about 60 percent of American men are circumcised, the practice is relatively rare worldwide. And it has become less popular in recent years as parents have come to see circumcision as a painful surgery that removes an integral part of the male sexual anatomy. According to the CDC, in 2003, the American circumcision rate dropped to a postwar low of 55.9 percent.

Marjan Hezareh, scientific director of the Los Angeles-based AIDS Research Alliance, is cheered by New York City’s decision to explore circumcision as what she terms an “additional prevention strategy” to condoms. For Hezareh, the health benefits for women of having a circumcised partner have been sufficiently proven and the medical benefits should outweigh any stigma against both adult and infant circumcision.

“We must disassociate circumcision from a sign of belonging to a specific religion or culture, and show it to people as another medical prevention strategy,” she says. “I bet people will be very open about this.”

But Tokes Osubu, executive director of Gay Men of African Descent in New York, is not so confident. He says he is baffled by the city’s decision to focus on circumcision. “We might be sending the wrong message to people who are already circumcised,” he says. “They might think, ‘Oh, because I’m circumcised, I might be okay!’ We are still dealing with the effects of HIV being misunderstood 25 years ago as a gay disease. Now I’m afraid people will say, ‘I don’t have a problem because Mayor Bloomberg said so.’”

Ronald Goldman, a psychologist and founder of the Circumcision Resource Center, makes the point that “the U.S. has the highest circumcision rate and the highest HIV-infection rate in the developed world.” A longtime anti-circumcision advocate, Goldman says, “If you’re treating a problem, medical ethics would say use the least invasive method available. And condoms are more effective, plus they’re cheaper.”

But in battling a disease that continues to grow at alarming rates in urban areas (one in 20 Washington, D.C. residents is HIV-positive, and in New York City, African-American and gay men have infection rates as high as 10 to 20 percent), New York City’s proposed circumcision drive is at the vanguard of public health efforts. Whether HIV/AIDS activists will get on board remains to be seen.

How Young Black Radicals Put the World on Notice