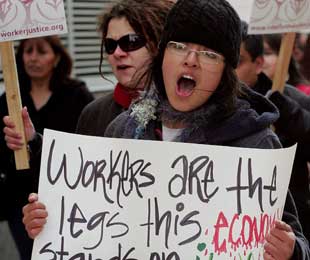 Demonstrators march outside the Chicago offices of Immigration and Custom Enforcement after a recent raid at a meatpacking plant in Illinois.

Seventeen immigrants detained for several weeks after an immigration raid at a candy packaging company in the Chicago suburbs were strip-searched, denied medical attention, roughly handcuffed, coerced to sign deportation papers they did not fully understand, and charged up to $23,000 for bond, according to some of the detainees and their advocates. This treatment underscores a trend in the accelerating number of U.S. Immigration and Customs Enforcement (ICE) raids on workplaces nationwide–unnecessarily rough treatment of detainees that makes not only the threat of deportation, but detention itself a source of fear and anxiety.

On the morning of Feb. 27, ICE agents swept into the Cano Packaging Corporation in Arlington Heights, Ill., a mostly middle class, white suburb 25 miles from Chicago. The agents arrested the undocumented immigrants who had been hired by a temporary staffing agency to work at Cano. The nine men and eight women were then bused to a jail, which also serves as a regional immigration detention facility.

Maria de Carmen Santana says she was invasively strip-searched, and told the process was a search for hidden drugs. She was handcuffed so tightly that it left marks on her wrists, she says, and she was unable to get pain medication for severe tendonitis in her ankle.

“It was disgusting how we were treated,” Santana, 46, says in Spanish. “We aren’t murderers. We aren’t drug addicts. Our only crime is being here to work without papers.”

One woman alleges she was denied medical help while vomiting, and another when suffering an intense migraine. An ailing diabetic man was forced to do exercises as punishment for not making his bed. Detainees say the facility’s meal portions left them extremely hungry, and a guard threw out fruit that detainee Leonel Trujillo had stashed in his cell.

ICE spokeswoman Gail Montenegro says that “ICE treats all detainees with the utmost respect and according to all detention standards. If anyone feels they have been treated unjustly, we urge them to file a complaint.”

Three detained Cano workers signed papers agreeing to “voluntary” deportation. Tim Bell, executive director of the Chicago Workers’ Collaborative, which has been developing a rapid-response network to immigration raids, says it is still unclear whether the orders, which were in English and not adequately explained to the Latino immigrants, were “removal orders,” which would mean they could be charged with a felony if they re-enter the country within a set number of years. It is also possible they agreed to “voluntary departure,” in which case they would not be subject to the re-entry “bars” which make it a felony to re-enter the U.S. after one has been deported. (Montenegro could not elaborate on specific cases.)

“A lot of them don’t realize what they’re signing. ICE doesn’t explain it to them, and there’s a lot of pressure on them the whole time to sign,” says Bell. “One of them was a diabetic who wasn’t getting his insulin. He basically had to sign it to save his life.”

The 14 other workers were given dates with an immigration judge. Santana was ordered by a judge to leave the country by January 2008; she is appealing. “But my case will be difficult because I don’t have a U.S. citizen child or husband here,” she says.

Since the workers were hired by the Georgia-based temporary agency Staffing Concepts International (SCI), Cano, which paid them about $8 an hour, is likely not liable for hiring undocumented immigrants. A Cano spokesman declined to comment, and a call to SCI was not returned.

Bell says the Workers’ Collaborative is filing a complaint with the U.S. Department of Labor because SCI was apparently not licensed to work as a day labor contractor in Illinois; and he says a lawsuit is being filed in civil court regarding alleged employment violations on SCI’s part. A civil rights lawsuit regarding ICE’s allegedly abusive treatment of immigrants is also being considered.

The Cano raid was followed about a month later by the arrest of more than 60 workers hired to clean a Cargill pork packing plant in Beardstown, Ill., a small town southwest of Chicago. Immigrant rights advocates denounced the timing of the raid–four days before Easter–and say the Beardstown workers also suffered abuses in detention.

In March, the National Immigration Project called for a moratorium on workplace raids and described recent ICE raids in Massachusetts, Iowa, Louisiana, Texas, Mississippi, Nebraska, Minnesota and other states as “overzealous” and “military-style.”

On April 6, a federal judge issued a temporary restraining order barring the government from deporting 110 of the 360 immigrants detained in a March 6 raid on a military equipment plan in New Bedford, Mass. The judge argued that ICE agents coerced the immigrants into waiving their right to appeal deportation orders.

“It seems like a way of scaring people about not only getting raided, but about detention,” says Bell. “The government is using terror tactics on this community.”