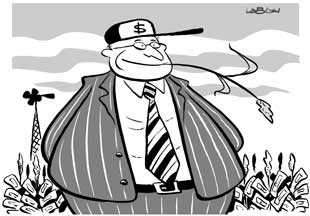 Whose Subsidy Is It Anyway?

The farm bill, which Congress will likely vote on this fall, will affect environmental, consumer, industrial, trade and anti-poverty policies as well as the prices and subsidies farmers receive for producing commodity crops such as corn, wheat and soybeans. Legislators are now conducting hearings and readying proposals, but the outcome is “more up in the air than it has been in 30 to 40 years,” says senior policy analyst Dennis Olson at the Minneapolis-based Institute for Agriculture and Trade Policy. A small opening exists for a new progressive farm policy based on some old principles.

Conventional wisdom says that the villains in farm policy are American farmers, who have in recent years collected about $20 billion a year in subsidies. But the government provides the subsidies because commodity prices have been so low that most farmers would have gone bankrupt without them. And prices have been low because legislators have written farm policy to drive those prices down to aid big business rather than farmers–or anyone else.

“The important thing for policymakers and the public to be clear on is that the people who get checks written for them under the farm bill are generally not the beneficiaries of those programs,” says Timothy Wise, deputy director of the Global Development and Environment Institute at Tufts University. “So the obvious question is: ‘Who benefited?’”

Consider for a moment Big Chicken–not the tacky 56-foot high tourist attraction near Marietta, Ga., but the industry that turns out more than 16 million tons of poultry each year. Once highly diversified, with nearly every farm producing chickens, the industry is now highly concentrated: The top four processors, led by giant Tyson Foods, control more than 56 percent of production.

Tyson and other giants have consolidated their power by purchasing chicken feed for, well, chicken feed. As soybean and corn prices dropped 21 percent and 32 percent, respectively, after the passage of the 1996 farm bill, the chicken industry effectively collected a subsidy of $1.25 billion a year, according to Tufts researchers Elanor Starmer, Aimee Witteman and Wise. The subsidy–worth $2.59 billion to Tyson from 1997 to 2005–represents the savings for the industry compared to paying for the full cost of producing the grain in its feed.

The cheap, subsidized grain also gave big factory farm operations an edge over diversified family farmers. By feeding animals their own grain rather than buying government-subsidized grain on the market, these farmers have to pay the full cost of producing grain they feed to their livestock. Politically, however, it remains “hard for farmers to make the case that they’re not the welfare cases,” says National Family Farm Coalition Executive Director Katherine Ozer, “but it’s Tyson and Cargill that are the real welfare cases.”

Big Chicken is not alone. International grain traders (like Cargill), industrial users of food and fiber products (ranging from the biggest users, the livestock and meat industry, to processors like Archer Daniels Midland and the vast array of junk food manufacturers), and the corporate producers of seed, fertilizers, equipment and other farm inputs all profit from overproduction and low commodity prices. Even after a long history of consolidation, tens of thousands of independent farm operators still must compete with highly concentrated agribusiness corporations that have the power to set both prices of products sold to farmers and prices paid for farmers’ products.

“You’re talking about a huge savings in a huge industry that never is getting a subsidy check written to it,” says Wise. Until biofuel demand recently drove up prices, most farmers sold corn or soybeans for less than it cost to produce. Government subsidies covered only some of their financial loss, and many had to take jobs off the farm to make up for their farm losses.

Grain traders then sold that corn and soybeans abroad at below-cost prices. Such dumping drives millions of peasants off their land. The displaced peasants flood urban labor markets and thus depress wages. Their exodus from the land also fuels waves of immigration to more developed countries, including the United States–where many get low-wage jobs processing chicken.

Farmers who produce 90 percent of all chickens in the United States work under contracts with the big processors. The processors own the chickens and dictate how they are raised. They also require that the farmers make major investments, suffer most of the market risks and typically make poverty-level incomes. Farmers also face the danger of losing their contracts on a whim. Mississippi poultry growers Roy and Nelda Gatlin, for example, claim that in 1997 Sanderson Farms, Inc., unfairly terminated their contract on the basis of a complaint that proved untrue, destroying the Gatlins’ business.

Most workers on the farm and in chicken processing plants, increasingly new immigrants, lack union representation and earn around $8 an hour, for jobs that pose grave threats to their health and safety. But workers and other victims of agribusiness are fighting back. The United Food and Commercial Workers continue to organize at a giant Smithfield pork processing plant in North Carolina, despite widespread company violations of labor laws. The Coalition of Immokalee Workers recently forced McDonald’s to guarantee higher pay for tomato pickers (see “Doing It For Themselves,” p. 33). The Campaign for Contract Agriculture Reform, a group of more than 200 local and national farm and agriculture groups, is lobbying to change this year’s farm bill to protect rights of contract farmers, who now account for 36 percent of all agricultural production.

Consumers count as partial winners: They get cheap chicken, even if much of it is contaminated with salmonella, antibiotics and other undesirable pollutants. As the world’s biggest chicken producer, the United States is also the leading exporter of chicken, particularly those parts other than the breast meat that Americans prefer, which is sold overseas at rock-bottom prices. Those dumped exports in turn decimate the chicken industry in many developing countries.

History of the farm bill

During the Great Depression, the federal government adopted many of the ideas of Franklin D. Roosevelt’s progressive secretary of agriculture, Henry Wallace. Wallace argued that the farm market is different from other markets and requires regulations that manage how much land is planted or kept in reserve. Managing supply, with the aid of an inventory of stored commodities, conserved the environment and smoothed price hikes and slumps.

The farm market is different because it’s so basic to people’s lives. Demand is only modestly affected by prices–one can only eat so much. And thousands of independent producers make a decision, which can’t be changed once a crop is planted, and then depend on weather to determine their success. When prices drop, farmers may shift crops, but they rarely take land out of production, as a manufacturer might close down a production line in slow times. If market slumps drive some farmers out of business, other farmers will simply buy up their land and expand.

In the mid-’60s, the government began to abandon supply management. Nixon’s Secretary of Agriculture Earl Butz promised unlimited exports for farmers who planted “fence row to fence row.” Then, the 1996 farm bill ended the old policy of managing both prices and production through a system of loans, target prices and stored surpluses. Instead, it provided subsidy payments to farmers that were “decoupled” from production. The intent was to wean farmers steadily from all support. But when prices crashed, pressure for subsidies was politically irresistible and continued with the 2002 legislation, despite criticism from other countries that such subsidies violated global free trade agreements.

Progressive farm experts and advocates say that the government should return to supply management and at the same time bring anti-trust lawsuits against corporate agribusiness. They want to expand measures to protect the environment, encourage better nutrition and help farm workers. Unfortunately, on Capitol Hill, corporate agribusiness lobbyists and campaign donations rule.

The Bush administration has proposed to leave the basic farm bill principles intact, but reduce subsidies. Rep. Collin Peterson (D-Minn.) and Sen. Tom Harkin (D-Iowa) will take the lead in pulling together Democratic alternatives in the House and Senate. Neither legislator is likely to fully embrace the Food from Family Farms Act, developed by the National Family Farm Coalition and supported by many progressive groups, but some of the core progressive ideas may enter the legislation.

The surge in biofuels, pushing up prices of corn and soybeans, “has really shifted the whole debate,” Olson says. Most agribusiness interests want to push prices back down. They could do that by eliminating the tariff on ethanol imports. Cheap Brazilian ethanol would undercut the domestic industry, reducing demand for, and thus the price of, corn.

On the other hand, the Congressional Budget Office projects no need to budget for subsidies, assuming that agricultural commodity prices will stay high. But Congress made a similar, incorrect assumption about higher prices in 1996, and simply eliminating subsidies now without guaranteeing a floor for grain prices could be disastrous.

Olson says that Congress could write the farm bill to subsidize the development of a new sustainable cellulosic ethanol market, which would encourage the construction of farmer- or community-owned ethanol plants that would guarantee fair prices for farmers. The government could expand conservation programs and at the same time encourage production of sustainable crops, like perennial grasses, for ethanol. It could also create a reserve for both food and fuel needs. Such a strategy could stabilize prices for both farmers and consumers at a reasonable level.

Clearly, the field must not be left to the agribusiness and energy giants. Should that happen, the biofuel boom could turn out to be a variant of the story of Big Chicken: good for big business, bad for everyone else. It depends on whether the 110th Congress recognizes that farming is too important to leave to the whims of the market and the power of agribusiness.