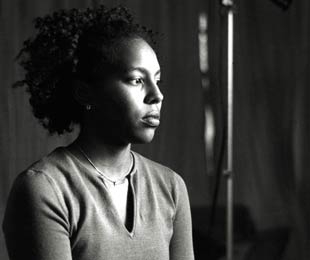 The documentary NO! chips away at the myths and silence surrounding sexual assault it he black community

NO! explores rape within the African-American community and fights society’s instinct to focus on the racism outside while turning a deaf ear to gender violence within

Filmmaker Aishah Shahidah Simmons didn’t miss a beat when a white, female student told her at a 2003 Boston College screening of her documentary NO!, “Until I saw your film, I didn’t know that black women could be raped.” Simmons, a Philadelphia resident, calmly asked the young woman why she believed such a thing. The student replied that she didn’t think black women, simultaneously praised and pilloried for their strength, would stand for such a violation–as if sexual-violence victims are able to negotiate with attackers or deter them with a hefty serving of attitude.

That wasn’t the case with Simmons, now 38, who was sexually assaulted in 1989, when she was a 19-year-old Temple University sophomore on a foreign exchange program to Mexico. A clandestine date–outside the dorm and the curfew hours–turned into a rape that left her pregnant and so devastated that she dropped out of college. Nor was that the case with the women whose stories Simmons has included in NO!, which explores rape within the African-American community.

Among them is a woman who was raped by her mentor, the university’s highest ranking black administrator; another whose fraternity boyfriend wouldn’t take no for an answer; and yet another who struggles with bulimia decades after her first boyfriend beat and raped her after she refused to have sex outside.

For Simmons, NO! has been a labor of love to make the film she wanted, regardless of how long it took. Simmons began filming interviews in 1994 with co-producer Tamara Xavier, but the documentary wasn’t released until 2006, largely because of the struggle to find $300,000 in necessary funding.

With NO!, Simmons hopes to chip away at the myths and disquieting silence surrounding sexual assault in the black community, which has traditionally been so attuned to racism outside that it has largely turned a deaf ear and a blind eye to gender violence within.

“There’s this notion,” says Simmons, “that when black women come forward [and say they’ve been raped], that we’re a traitor to the race. I wanted to show these women, their faces, their names. I understand privacy and shame, but shame should be on the perpetrators.”

Simmons followed the case of Desiree Washington, the beauty queen who accused boxer Mike Tyson of raping her in 1991 in his hotel room. (Tyson served three years in prison.) Then came the campaign to “save” Tyson and discredit Washington–complete with T-shirts proclaiming his innocence. In NO!, Simmons includes footage of Nation of Islam Minister Louis Farrakhan asking what Washington expected when she went to Tyson’s room as other faith leaders cackle in agreement.

Simmons wondered why those leaders and others never acknowledged that rape isn’t typically a crime committed by a stranger and that, for most black women, the perpetrator is an acquaintance who looks like them. The lack of critical reaction from the black community in the wake of the Washington case, combined with a 1994 trip to South Africa, where she met activists working on issues of sexual assault, galvanized her to make NO!. It is estimated that as many as half of all South African women will be raped in their lifetimes.

American women are also vulnerable to sexual assault. According to a study by the National Institute of Justice and the Centers for Disease Control, one in every six U.S. women will be subjected to sexual assault or an attempted assault during her lifetime. The organization’s “Prevalence, Incidence and Consequences of Violence Against Women Survey” estimates that 18.8 percent of black women will survive a rape or attempted rape–making them only slightly more likely than the general population (17.6 percent) and white women (17.7 percent) to experience such a crime, but much less likely to be raped than Native Americans.

Numbers alone don’t express the full extent of rape or sexual assault in the black community–a topic that has probably been discussed more extensively in novels such as Alice Walker’s The Color Purple than in real life. Black women must deal with competing interests–protecting one’s self versus protecting the image of black men in a society where black men are the usual suspects of sexual crimes, facing the distrust of the police versus the need for personal security–that reduce the chance they will report rape.

With the help of anthropologist and former Spelman College President Johnnetta Cole, historian Beverly Guy-Sheftall and former Black Panther Elaine Brown, NO! examines the historical forces that foster sexual violence–and suppress dialogue about it–in black communities. In a country built on slavery, which was predicated on control of black labor and reproduction, black women have been regarded as perpetually sexually available or “unrapeable.” They have never fit easily into the “good girl” mold.

“I realized that I couldn’t talk about sexual assault in the African-American community without talking about slavery,” says Simmons. “If somebody owns you, how do you have the right to consent?”

NO! is generating discussion within the black community. In 2003, writer Kevin Powell (who is black) showed an unfinished cut to a crowd of hundreds–including many African-American men–on a wintry Friday night in Harlem. Men are a vital part of the solution, says Nia Wilson, the associate director of Spirit House, an arts and cultural nonprofit in Durham, N.C. “This is not about going after black men,” she says. “This is about uncovering something we need to address, and we need to address it together. Men are the only ones who can stop rape, no matter what we say, no matter how much light we shine on it.”

Wilson, who is black and a sexual-violence survivor, is also a member of UBUNTU, a coalition that combats racism and violence. Simmons allowed UBUNTU to use NO! to foster dialogue around North Carolina. Wilson recalls a screening for a white audience that was disengaged from the topic. All of the reactions Wilson had learned to expect–tears, outrage, personal testimonies–didn’t happen. The audience members acknowledged the violence, but their comments and lack of emotion told her that they couldn’t relate to this type of violence.

Bryan Proffitt, a 28-year-old white schoolteacher and UBUNTU member, says that talking about rape and race requires starting from a framework that acknowledges a history of interracial violence, white supremacy, male domination and myths that need debunking. “There’s always a good bit of anxiety about how white folks are going to see this film. ‘Oh, look, black guys are rapists. We knew that.’ We’ve always tried to be careful of framing this film beforehand because we recognize that white people come in with that particular narrative and we want to challenge that before they see it.”

Before each screening, the UBUNTU facilitator reads a statement that lists 27 reasons the film is being shown, including: “Because the stories of survivors of sexual assault are powerful and sacred.” “Because there are survivors here.” “Because this film holds us all accountable for the world that we comply with and perpetuate.”

This April, NO! was selected as a featured resource by the National Sexual Violence Resource Center. “Everywhere I’ve shown the film,” says Simmons, “someone comes up and discloses she’s a survivor. I could be the only black woman in the room–me and the women on the film–in Hungary, Croatia, Serbia, women stand up and say, ‘This is my story.’”

For more information on NO!, visit www.notherapedocumentary.org.