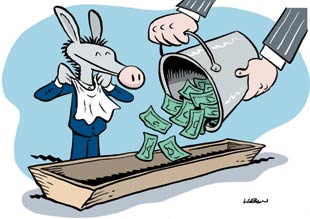 Kissing up to K Street

In 1903, journalist William Riordan published a series of interviews with George Washington Plunkitt, who was probably the most famous leader of New York’s Tammany Hall (other than Boss Tweed himself). During a discussion of Lincoln Steffens’ then-new book The Shame of the Cities, Plunkitt told Riordan that Steffens “can’t see no difference between honest graft and dishonest graft and consequent, he gets things all mixed up.”

The same thing could be said for our Congress.

“Honest graft,” said Plunkitt, is when “the politician looks after his own interests, the organization’s interests and the people’s interests all at the same time.”

Dishonest graft, by contrast, is engaged in by “looters” who “go in for themselves alone without considering their organization or the people.” Think Tom DeLay and the Abramoff scandal. As the Associated Press reported last year, the Abramoff-DeLay relationship made DeLay “a king of campaign fundraising,” allowing him “to visit cliff-top Caribbean resorts, golf courses designed by PGA champions and four-star restaurants–all courtesy of donors who bankrolled his political money empire.” In the process, he helped pass energy legislation that gave away taxpayer money to energy companies and tax legislation that gave away taxpayer money to millionaires–all while creating a scandal that eventually helped to break his party’s hold on Congress.

But in a certain sense, Republican corruption is the purest form of honest graft. The Republican Party does not pretend to be anything other than the party of Big Money. Take the famous K Street Project: designed by Republican congressmen to use the promise of access–and the threat of no access–to force corporate lobbying organizations in Washington to fire Democrats and hire Republicans, so that those new Republican lobbyists could siphon as much corporate campaign contributions as possible to Republican political candidates.

Had this operation performed its work in secret, one might be able to say Republicans at least tried to pretend they were something they were not. But the K Street Project actually had its own public website, bragging to the world about its pay-to-play scheme.

This is “honest” graft–that is, being open and honest about what the American Heritage Dictionary defines as the “unscrupulous use of one’s position to derive profit or advantages.” The Republican Congress didn’t make any serious effort to pretend to be anything else. And in holding onto Congress for 12 years, they made the same successful calculation Plunkitt did: They believed that honest graft doesn’t “hurt Tammany with the people” if the people perceive it to be out in the open, and merely a small, necessary and innocuous cost of the government doing business.

Clearly, this formula failed in 2006 when, after six years of one-party control of Congress and the White House, the American public started to see how big, wasteful and destructive Republican corruption really was.

Democrats rode their populist, anti-corruption platform to victory in 2006. But as we are now beginning to see, what we may have with the Democrats is merely a transfer from honest graft to dishonest graft–that is, corrupt behavior that pretends to be done in the people’s name and that flies in the face of what the people were promised.

On May 10, a handful of Democratic congressional leaders held a press conference to trumpet a so-called “deal” with the Bush administration to push forward a package of lobbyist-written trade deals–the very same kinds of trade deals 100 of their candidates in 2006 said they would work to stop if elected to Congress. Though Democrats said they had secured basic labor and environmental protections in these deals, Thomas J. Donohue, the Bush-connected head of the U.S. Chamber of Commerce, told reporters that he had been given “assurances that the labor provisions [in the deal] cannot be read to require compliance.”

Rep. Rahm Emanuel (D-Ill.) provides a good example of dishonest graft. In 1993, Emanuel was the Clinton administration aide charged with ramming NAFTA through Congress “over the dead bodies” of labor and environmental groups, as American Express’s CEO cheered at the time. Emanuel orchestrated weekly meetings with K Street lobbyists to strategize about how to pressure Democratic lawmakers. Emanuel went on to cash in as an investment banker, raking in roughly $16 million over a two-year period. From his Wall Street perch in 2000, he published a scathing Wall Street Journal op-ed demanding Congress pass the China free trade deal–another K Street-backed goodie that has helped keep American wages stagnating in the face of skyrocketing corporate profits, and is now projected to destroy at least 1 million American jobs, according to the Economic Policy Institute.

Just two years after grossly outspending an opponent to buy an Illinois congressional seat, Emanuel was appointed to the House Ways and Means Committee, the panel that oversees trade policy and that helped corporate lobbyists ram NAFTA through back in 1993. Emanuel also was appointed head of the Democratic Congressional Campaign Committee, which ran millions of dollars worth of ads trumpeting Democrats anti-corruption platform, and which supported the scores of Democrats running against the very lobbyist-written trade policies Emanuel has based his political career on.

Now, with Emanuel as Chairman of the House Democratic Caucus, we see dishonest graft kick into high gear. The same day as the press conference, a group of House Democrats wrote a formal letter to Emanuel demanding he hold a Democratic Caucus meeting to discuss the secret trade negotiations going on between a handful of Democrats and the White House. That letter, according to The Hill, was “rebuffed” even though, again, it was Emanuel’s DCCC that aggressively supported Democrats 2006 fair trade candidates. No meeting occurred, and instead Democratic leaders held their press conference, announcing a secret trade deal that, like NAFTA, is strongly backed by K Street lobbyists, but opposed by organized labor, environmental groups, health care groups and grassroots Democrats. Meanwhile, when Emanuel was asked by the Politico’s Jeff Patch for details about why Democrats were now backing off their promises to reform lobbying laws so as to prevent Abramoff-style abuse, he did his best Dick Cheney impression, telling the reporter, “Why don’t you go fuck yourself.”

Running a campaign against corruption, against lobbyist-written trade policies and for lobbying reform, and then using the power granted by voters based on that campaign to engage in corruption,Êpass lobbyist-written trade pacts and reject the most minimal lobbying reforms–all in exchange for campaign contributions–is Plunkitt’s very definition of dishonest graft. It is “political looting” and it is the result of a hostile takeover of the Democratic Party by Big Money interests.

But, then, perhaps we shouldn’t be surprised. It is no secret that Democrats have a very powerful faction within their ranks that is perfectly happy engaging in the same kind of pay-to-play corruption that Republicans mastered. It was, for instance, Minority Whip Steny Hoyer who bragged on his taxpayer-funded website about starting his own K Street Project and whose top legislative aide moonlighted as his political action committee fundraiser. It is a corporate-funded front group known as the Democratic Leadership Council that continues to push for lobbyist-written trade deals that include no basic labor, human rights or environmental standards.

And it is top Democratic presidential candidates who publicly jockey for connections to Big Money interests as if building a warchest of corporate cash was one of the many achievements they need to flaunt in order to win over voters. Hillary Clinton, for instance, talks a lot about helping the middle class, yet as the number one Senate recipient of health care cash, she also now gives speeches apologizing for ever pushing universal health care. Additionally, Mark Penn, her top campaign strategist is a pollster who moonlights as the CEO of one of the world’s largest corporate PR firms–a firm that helps companies run, among other things, union busting campaigns. Barack Obama, meanwhile, has been caught trying to sidestep the spirit of his own much-bragged-about ban on taking money from lobbyists. And BusinessWeek reports that both candidates have asked Wall Street executives–many of whom are their top donors–to “refine” their official economic platforms, all the while campaigning for the nomination of the “party of the people.”

This all started right after the Americans’ votes were counted in 2006. Days after the election, both the Wall Street Journal and New York Times published articles about how Democratic-affiliated corporate lobbyists were salivating at the prospects of using the new Congress to rake in legislative favors for their clients. “Democratic lobbyists are fielding calls from pharmaceutical companies, the oil and gas industry and military companies,” the Times wrote. “Senior [Democratic] aides are now tempted to leave Capitol Hill to become lobbyists and potentially quadruple their salaries.” As incoming Speaker Nancy Pelosi proclaimed that election night would usher in “the most honest, most open and most ethical Congress in history,” her own chief of staff was being named a “K Street Superstar” by BusinessWeek as he quickly transitioned to life as a lobbyist for ExxonMobil and pharmaceutical giant Amgen.