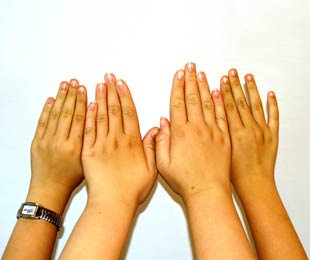 Generalizations based on hand shape not only are formulated from small pools of data, but smack of pseudo science.

New scientific “evidence” has been released, bolstering the old claim that women who excel at math and science are less feminine–or at any rate more masculine–than their sisters who can’t balance a checkbook or tell the difference between a phenome and a phoneme, but can talk up a storm.

In the August issue of British Journal of Psychology, a team of researchers led by psychologist Mark Brosnan of the University of Bath, England, have published findings that suggest women who are good at science and math have longer ring fingers than index fingers, which indicates a relatively high level of prenatal exposure to the male hormone testosterone. Conversely, longer index fingers indicate higher levels of the female hormone estrogen, according to the study, and a corresponding aptitude for verbal communication. The study used standardized test scores of 75 British seven-year-old boys and girls and compared them to photocopies of the youngsters’ hands.

The media had a field day: “Study Correlates Finger Length to Performance on SAT,” trumpeted FOX News. The widely-linked LiveScience.com asserted: “A quick look at the lengths of children’s index and ring fingers can be used to predict how well students will perform on SATs, new research claims. Kids with longer ring fingers compared to index fingers are likely to have higher math scores than literacy or verbal scores on the college entrance exam, while children with the reverse finger-length ratio are likely to have higher reading and writing, or verbal, scores versus math scores.”

Many of the news reports didn’t mention that the British SAT–upon which Brosnan’s study was based–refers to the Standardised Assessment Test, which is given to all British schoolchildren at age 7, 11 and 14, and is not the same as the U.S. College Board exam that uses the same acronym.

Still, the idea of using finger length to make predictions and assumptions is not out of keeping with Brosnan’s conclusions. On his website, Brosnan states:

Brosnan’s is not the first study linking finger length to sex hormones. In March 2000, S. Marc Breedlove, who like Brosnan is a psychologist, and other researchers at University of California at Berkeley, published a study in the journal Nature that ostensibly described the proper “masculine” and “feminine” hand configurations, and claimed that people whose hands deviate from these characteristic shapes are likely to be homosexual.

In the Breedlove study, straight men and lesbians were found to have longer ring fingers than index fingers on their right hands. Straight women and gay men had index and ring fingers of about equal length, although this was mitigated by whether a gay man had older brothers, in which case his hand was likely to have the shorter index finger common to straight men and lesbians–only way shorter.

The syllogism implicit in the two studies is that women who are good at math and science are likely to be lesbians.

The Berkeley researchers based their conclusions on the hands of 720 volunteers they recruited at street fairs in San Francisco, volunteers who agreed to have their fingers measured and to answer a questionnaire about their birth order and sexual preferences, in exchange for a $1 lottery ticket. Given all the media attention, websites and e-mail forwards it spawned, that seems a very small and curious sample. Still, it was nearly 10 times the size of Brosnan’s.

It would be interesting to compare the finger lengths of either test’s subjects to those of other members of their families–gay or straight, math-averse or astrophysicist–including the older brothers of the gay men in the Breedlove study. But the researchers never looked at them.

Their generalizations based on hand shape not only are formulated from small pools of data, but smack of pseudo science. And not so much palmistry–although its practitioners maintain that a short ring finger indicates someone who is shy and lacking in emotional control (sounds like that stereotypical woman again, doesn’t it?)–as phrenology.

Phrenology was based on observations made by German neuroanatomist Franz Josef Gall (1758-1828), who published his first work on the subject in 1791. During the 18th and 19th centuries, phrenologists maintained that your personality, character, level of intelligence and morality could be gauged by examining the shape of your head. Bumps in one of 42 delineated areas, called faculties, supposedly indicated a predilection for combativeness when they appeared behind the ear, pride when found at the crown or musical ability when occurring near the temple. From phrenology, we retain the notions of the egghead and the lowbrow in popular speech if not in scientific theory.

Gall’s conclusions, which have been discredited and dismissed, were based on the same scientific method as those of Brosnan and Breedlove. Gall observed, hypothesized and published in good faith. Phrenology was in its day a respected “confident science,” as Pierre Schlag observed in the Harvard Law Review in 1997, with its own scientific publication, the American Phrenological Journal.

Phrenology enabled an early form of criminal profiling. Among its adherents were Arthur Conan Doyle (1859-1930), creator of Sherlock Holmes; and Alan Pinkerton (1819Ð1884), founder of the eponymous detective agency known for its role in the 1886 Haymarket massacre.

“This science,” asserted an unbylined article about phrenology in the June 2, 1838 edition of Knickerbocker Magazine, “enables the teacher to understand the mental capacities of his pupils, and to adapt their studies accordingly. It should decide one in the choice of his profession, and settle upon his walk in life.”

In eerily similar language, Brosnan said on May 23 that “finger ratio provides us with an interesting insight into our innate abilities in key cognitive areas,” and that he and his colleagues “are also looking at how digit ratio relates to other behavioural issues, such as technophobia, and career paths.”

When Lawrence H. Summers, then-president of Harvard University, said in a January 14, 2005 speech that innate biological differences between men and women were the reason that women were under-represented “in tenured positions in science and engineering at top universities and research institutions,” he attributed his assumptions to “what we’ve learned from empirical psychology in the last 15 years.”

What he had learned, that is, from the work by empirical psychologists in the mold of Brosnan and Breedlove.

An outcry ensued, and the entire episode ultimately cost Summers his job. Throughout the controversy, the political right alleged that not only was Summers being unfairly sacrificed, but that actual science was being suppressed in the name of political correctness.

Back in 1838, the Knickerbocker writer lashed out against his own detractors and contended it was not “immoral” to base character assumptions on the bumps on someone’s head, likening it to predictions that a man with one leg shorter than the other would walk with a limp. “Am I to be blamed for having discovered the cause of his lameness? Why, that I ought to be whipped for the discovery? Ought you not rather to thank me for the discovery, and give the lame man a crutch?”

It’s 169 years later, and this is the sort of “science” we’re still facing. And for the duration, you may want to keep your hands to yourself.