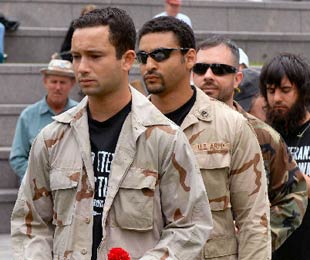 Vets like Vincent J. Emanuele and other Iraq Veterans Against the War inherit the reins from the Vietnam era peacenicks before them

Vince Emanuele, holding a red carnation, honors the dead at a Memorial Day service at the Vietnam War Memorial on the banks of the Chicago River.

In April 2005, Lance Corp. Vincent J. Emanuele was honorably discharged from the Marine Corps and returned to his home in Chesterton, an old steel town in northern Indiana, 40 miles east of Chicago. Emanuele, 23, is now enrolled at Purdue University North Central and studying

political science. He plans to go on and get his doctorate, if not in political science then in one of the liberal arts. But today his main goal in life is stopping the war in Iraq. The vehicle of his activism is Iraq Veterans Against the War (IVAW), the antiwar group founded in 2004 and modeled after Vietnam Veterans Against the War. In These Times spoke with Emanuele after Memorial Day weekend, during which he participated in antiwar events in New York and Chicago.

How did you end up in Iraq?

I was just out of high school when I joined the Marines in 2002. After basic training, I was deployed to Iraq in March 2003 as an infantryman. We were stationed at al-Asad Air Base near the Euphrates River in western Iraq next to the Syrian border. Even though we had been given the whole spiel about winning hearts and minds in training, it was far too hostile to interact with the local people.

I didn’t know how people from other cultures lived, and I had never seen the destruction and death that you can only see during a war. I was ignorant on both counts, as many people are in our country.

When did you change your mind about the wisdom of this war?

Being over there with an antiwar mindset was difficult. The guys I was with knew I was opposed to the war, and I had a lot of support from them, even if they didn’t agree with me. But whenever I would voice my opinion to commanding officers, I was told to shut up.

Knowing what I knew, it was difficult to go on combat patrols and kick doors in and have to pull my trigger in self-defense. My attitude shifted particularly in terms of not wanting to take anyone’s life. Unfortunately, we encountered scenarios that dictated differently.

How has your family responded to your activism?

My mom and dad have been very supportive, which is a big help. I know several veterans who don’t have that, who have parents who have very different political ideologies.

What did you think of the Iraqis you were shooting at?

I understood the perspective of those who were hostile to us. I knew where they were coming from. I tried to imagine what it would be like to be in the suburbs I was from in Indiana and have a foreign army patrolling our streets and kicking our doors in and killing innocent people–because, of course, innocent people are killed. I came to the conclusion that I probably wouldn’t be doing anything different from what the fighters in Iraq are doing right now.

You spent the Sunday before Memorial Day doing mock patrols of New York with other members of IVAW. Why?

The entire weekend was very emotional, especially the event in New York. We put on a guerilla theater. We dressed up in full combat and patrolled the city, holding our hands like we were holding guns, like we patrolled villages in Iraq. It was difficult because I thought that was a person in my life that I had put behind me and forgot–and it was surprising how easily I fell back into that routine of being a soldier and that scared me. It brought back memories of really rough times.

We wanted to show what it was like to have an occupying force in their country. And it made me angry to see the reaction of some people. When other veterans were passing out flyers, people would take them and, without looking at them, throw them away. But most people on the streets were just freaked out.

You said you once killed a man. What happened?

We were at our base camp, near the Euphrates River in our little wooden shack, our “C-Hut,” and we got called that we needed to re-supply our platoon’s second squad with wood. They were at a communications center about 20 miles away, overlooking the city of Al Qa’im. It was Feb. 15, 2005, and they were getting a little chilly.

We delivered the wood and stood around and BSed and then headed back to base. I was the A-driver, the shotgun rider, in the second vehicle in a four-vehicle convoy. I remember the moon was spectacular and I faded asleep. At about the halfway point, I was woken by two deafening gun shots and our squad leader shouting and pointing off into the field.

We thought it was somebody who was planting a bomb, and so we started driving off into the field. I caught a glimpse of a silhouette. It was a man running, in a flash of a second he was gone, he jumped down into an irrigation ditch. I exited the vehicle and all I could think while approaching the ditch was, “Please do not pop up and shoot me in the face. Please do not pop up and shoot me.” I looked down but couldn’t see a thing. I emptied my entire magazine of rounds into the ditch. I couldn’t stop pulling the trigger.

Lance Corp. Villa came running toward me with a flashlight, and there he was dead, no more than a few feet in front of my face. To this day I can’t remember why, but when Villa put that light on him I fired two more rounds into his already bloody corpse. Maybe out of fear of him still being alive or possibly me having to care for a man I had already killed.

Upon picking up the body we saw that I had shot the man in the back of the head. His forehead had a baseball size gaping hole from where the bullet exited. We checked him for bombs, and from there we waited for the explosive experts to arrive. They found that there were four men who had been planting a bomb in the road.

There’s something sensational about taking another human life, my immediate reaction was that of accomplishment, satisfaction, of being a “hero.” That euphoric feeling faded fast. On the way home I felt numb. Back at the base we arrived to a small crowd of fellow Marines who had heard the news. They were congratulating and patting me on the back. I remember wanting to get to the showers as fast as possible. The rest of that night I felt as if he were watching my every step. I hadn’t felt such fear since I was a young boy.

That wasn’t the last time I had to discharge my weapon. Two days later we were ambushed and my best friend was killed in a five-hour firefight with insurgents. Maybe God was showing me what it was like to have a life so close taken so fast. I found out real quick what killing and the tragedies of war were like, all within a 72-hour span of time.

I struggle with it to this day.

I let a lot of people know what I was going through and I got a lot of support. A Vietnam vet told me, “The only thing that is dumber than going to Vietnam was getting killed in Vietnam.”

This war is tragic. It was not needed. To die in this war is a wasted death. Had I died, I would have indeed died for nothing–or maybe not for nothing, but for oil and dollars and cents. To be brutally honest, the war was a money-making machine. And it hurts to think of it that way and that you have been used.

What else did that experience teach you?

With the possibility of dying or being hurt on a daily basis, I learned never to take life for granted.

I have come to grips with the fact that I had to fire my weapon and that I had to engage hostiles, but I plan to use my experience and what I have learned to help end this war, to help veterans with benefit issues, or family issues or personal issues. That is a large part of what Iraq Veterans Against the War does. It is not just a political group. It is a family. It provides a space where guys who feel the way we do about the war can come together to talk and have someone there who has shared the same experiences, who can comprehend what you have been through, who will listen without judging you, without thinking you are a little crazy.

I would love to see every veteran who served over there come back and say, “This [war] is bullshit that needs to end tomorrow.” But I understand that when you are shipped off to something that you can give your life or limb for, you want to believe in the cause.

What are your plans for the future?

I am going to be in the antiwar movement until the day I die. I plan to be as active as possible in Students for Peace in Iraq, and the Northeast Indiana Coalition Against the Iraq War, but mostly IVAW doing events and helping out in any way I can.

The Vietnam Veterans Against the War have guided us and helped us along our way. Seeing the time and dedication of these men and women is an inspiration. It is so easy for us to relate to one another. Our stories are eerily similar, even though they are separate wars separated by 40 years.