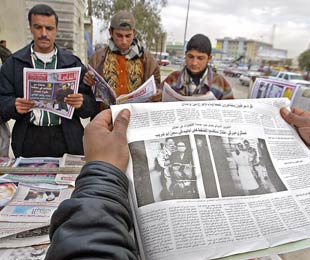 The U.S. military's posture of moral rectitude came a cropper with Abu Ghraib. Here an Iraqi looks at pictures of torture in a newspaper in Baghdad on Feb. 16, 2006.

Largely unrecognized by the American public, unacknowledged by those in power, and denied by professionals in uniform, the United States suffers today from an enduring crisis in civil-military relations. The tacit social contract of mutual rights, obligations and expectations that binds the three parties to this relationship–the military, its civilian overseers and society–is seriously frayed.

This isn’t a crisis in the popular sense of the term. We need not fear a coup d’état from a military thoroughly socialized to sublimate such dramatic recourse. Troops aren’t occupying our homes (even though, as major newspapers and the American Civil Liberties Union have reported, they are monitoring our communications and infiltrating our gatherings). American combat units aren’t disintegrating in combat or openly defying orders. And regular polls by Harris and Gallup indicate that, regardless of the performance and behavior of those in uniform, the public hold the military in higher esteem than most other institutions of society–though it remains a mystery how we should interpret these findings.

This crisis is more akin to a lymphoma or termite infestation–its symptoms hidden and unnoticed–that surreptitiously destroys the infrastructure of the body or edifice from within. In this case, the end result could prove to be America’s strategic debilitation.

To grasp this crisis–its existence and its magnitude–we must consider how far the current state of civil-military relations in this country deviates from the ideal. A healthy state of civil-military relations requires: (1) a strategically effective (not just a militarily effective) military; (2) whose leaders provide strategically (not just militarily) sound advice to; (3) strategically competent civilian authorities–executive and legislative–who themselves are representative of and answerable to; (4) a civically engaged, strategically aware public; (5) all of which is undergirded by a critical free press, a vibrant civil society and a properly subordinated military-industrial complex. Today, we are failing on all these counts.

Is the military operationally competent? If by that we mean can it successfully accomplish all it is called upon to perform (from conventional combat operations to counterinsurgency to peacekeeping to disaster response)–without being disproportionately destructive, indiscriminately lethal, exorbitantly expensive or unduly escalatory–the answer is no. Iraq and Afghanistan are merely the latest examples of the military’s unyielding preference for a single way of war–conventional combat operations against conventional foes. These ongoing campaigns are also emblematic of the military’s resistance to seriously and permanently adapting to the unconventional operations (like counterinsurgency) against so-called asymmetric threats that characterize the global battlefield of today and tomorrow. Yes, there is a new army counterinsurgency field manual prepared under the hand of Gen. David Petraeus, the current U.S. commander in Iraq (See “Counterinsurgency 101,” March 2007). But like numerous such field manuals during the Vietnam era, it is destined to have little enduring impact on how the military actually operates and sees itself.

Superimposed on this is the institution’s chest-thumping culture of machismo, with its incessant talk of “warriors” and “warfighters.” One need only observe news footage of the heavy-handed, culturally insensitive, firepower-intensive tactics of U.S. troops in the field, frequently given to undisciplined individual behavior born of fear, immaturity and inexperience, to grasp the results.

Does the military provide sound (strategic) advice to civilian decision-makers? Even traditionalist observers of civil-military relations who subscribe to the view that the proper preserve of the military is narrowly circumscribed military advice must answer no. Whatever Gen. Petraeus may say or eventually accomplish, the desultory U.S. performance to date in Iraq and Afghanistan is an outgrowth of failed military advice from senior officers unable to rise above their tactical and technical conditioning. In fact, deep-seated anti-intellectualism and an attendant institutional bias for action have prompted those in uniform to seek comfort in tactical and technical thinking, and thereby robbed them of the capacity to think strategically.

Is the military politically neutral? That is, are its personnel sufficiently divorced from involvement in, or undue influence by, partisan politics that they do not compromise the objectivity expected of them? Are they similarly neutral on ideological, religious and cultural grounds? The answer, in all cases, is no. Consider the increasing tendency of retired generals and admirals to endorse political candidates; the outspokenness of the retired generals who called for the ouster of then-Defense Secretary Donald Rumsfeld (after they had their pensions safely in hand); the willingness of the military to let its units and personnel be repeatedly used as political props by the commander in chief; even the emergence of outspoken lower-ranking active-duty antiwar groups such as “Appeal for Redress From the War in Iraq.” Consider as well the pronounced conservative bias (and Republican political preferences) of most in uniform; the increasing religiosity of service personnel (ranging from Lt. Gen. William G. Boykin, the No. 2 intelligence official in the Pentagon, to evangelical Christians at the Air Force Academy); the deeply entrenched institutional bias against and persistent persecution of homosexuals in uniform, legitimized most recently by the anti-gay remarks of Joint Chiefs of Staff Chairman General Peter Pace; the disturbing presence of neo-Nazi skinhead extremists in military units, documented in July 2006 by the Southern Poverty Law Center.

Is the military socially responsible? Traditionalists commonly argue that the military cannot afford to be a test bed for social experimentation. Nonetheless, as a major institution of society, the military is obligated to be socially responsible. That means, among other things, being demographically, experientially and ideologically representative of society. Today’s military is not representative–at least in the sense that neither the country’s political, economic and media elite nor their offspring serve in uniform.

Being socially responsible means being affordable. At a gluttonous cost of $700 billion a year, more than the gross domestic product of all but 17 of the world’s countries, the U.S. military clearly is not affordable–especially if the spurious notion that we are embroiled in an endless “long war” retains political traction.

Being socially responsible means being willing to dissent responsibly–to speak up and speak out–without open or surreptitious disobedience to proper military authority. The deeply ingrained ethos of obedience, the widespread careerist motivation to seek higher rank, the tendency to promote dutiful followers at the expense of assertive leaders, and the principle of political neutrality all have nurtured habits of unquestioning acquiescence among senior officers who should, but don’t, exercise their responsibility for checking and balancing civilian strategic shortcomings.

Being socially responsible means being morally superior–walking the talk of moral propriety. Too many in uniform today are convinced that they are morally superior to an otherwise decadent society. But such moral arrogance is undeserved in light of the hundreds of incidents of aberrant behavior by military personnel each year. Military claims that episodes such as Abu Ghraib and Haditha are unrepresentative of an otherwise morally superior military simply do not hold up in the face of persistent evidence to the contrary.

The rest of the story

Beyond the foregoing, the U.S. military almost invariably precipitates rather than prevents crisis; feeds perceptions abroad of American arrogance and hypocrisy, while undermining U.S. credibility and legitimacy; threatens, in single-mindedly providing for the common defense, other important dimensions of security (liberty, justice, the general welfare); and permits itself to be an instrument for the militarization of U.S. foreign policy. In short, it is strategically dysfunctional.

Add to this the following, and it is indeed a recipe for crisis: consistently unsound strategic advice from senior military leaders; strategically inept civilian officials, executive and legislative, who have turned the hallowed principle of civilian control into civilian subjugation; a civically apathetic public that has acceded to uncompromising military demands for secrecy and failed to responsibly oversee the military’s overseers; an uncritical press that has declined to exact transparency and accountability from the military and its overseers; a weak, fragmented civil society, typified by a largely moribund anti-war movement; and a military-industrial complex whose overweening influence on policymakers and policies has fed militarism and corruption.

Given this state of affairs, no longer can we, the people, give a free pass to a military institution that expects unconditional appreciation, unequivocal support, unquestioning trust, unlimited discretionary license and the absence of “meddling” by “amateurs.” Nor can we blindly trust those who profess to oversee the military on our behalf. The strategic price for doing so is one we cannot afford.

Gregory D. Foster is a professor at the Industrial College of the Armed Forces, National Defense University, Washington, D.C. The views expressed here are his own.