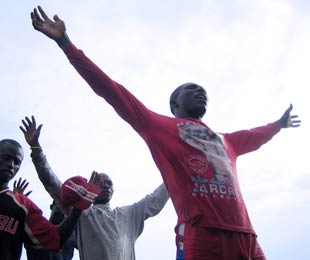 Young men from the Ghanaian village of Senya Beraku participate in a fishing ritual.

Risking Everything for Europe

Industrial fishing off the African coast ruins livelihoods and sends fishermen on a perilous journey across desert and sea.

Before setting out across the Mediterranean Sea from Libya to Italy, the Ghanaian human traffickers who had hired Samuel and his two friends to captain the boat in exchange for their passage warned them not to sail with more than 90 immigrants aboard–nor to trust the Libyan police.

But under the cover of night, when a freezer truck delivered them to the beach they realized that corrupt local cops had filled the leaky, stolen fishing boat with more than 100 sub-Saharan Africans. Samuel and his friends, fishermen from a coastal village in Ghana, were responsible for reaching European shores, alive. What were they to do now?

“If the sun rose and we were discovered, who knows what problems could have arisen,” says Samuel, whose name was changed to protect his identity.

Samuel is one of the tens of thousands of Africans who have sought to reach Italy by boat in recent years. Last year about 22,000 immigrants arrived on Italy's shores–primarily the islands of Lampedusa and Sicily–close to double the number from 2004. Though more illegal immigrants enter Italy through the country's northern border with Slovenia–which is used as an entry point for those from Eastern Europe, the Middle East, the Indian subcontinent and the rest of Asia–the leaky boats from North Africa draw the most attention. And the dangerous trip across the Mediterranean follows an even deadlier journey through the Sahara Desert to reach North Africa.

Samuel comes from Senya Beraku, a village of about 12,500 on the Gulf of Guinea, about an hour drive west of the capital, Accra. Fishing was once the dominant industry there, but fish off the Atlantic coast are disappearing at an alarming rate. Experts suggest several causes for the fishing industry's plight. The fishermen use nets with holes that are too small, or catch fish with electric lights and dynamite–unsustainable practices that exhaust fish populations. In addition, the growing coastal population has put pressure on the food supply. But central to the problem are the industrial trawlers subsidized by the European Union, primarily from Spain, which has acquired fishing rights off West African territorial waters. And industrial fishing greatly affects the catch closer to shore that the local communities rely on for survival.

European trawlers now fish off the coasts of nine West African countries–from Morocco in the north to Gabon in the south–a development criticized by the United Nations as well as environmental organizations like Greenpeace and the World Wildlife Fund, which question the sustainability of the practice.

In April 2006, Greenpeace observed and intercepted a Spanish trawler, the Binar 4, en route to Las Palmas in the Canary Islands after illegally fishing within the territorial waters of Guinea. The trawler intended to sell its catch at Las Palmas, which Greenpeace calls the “fish laundering capital of the world.”

“Some say the lull is natural, and that the fish will come back at some point, but this is now the third year in a row that we aren't catching enough fish,” says Chief Mortey, who presides over Senya Beraku's fishing industry.

The fishermen typically leave at daybreak. Between five and six in the morning, the sounds of outboard motors from the beach pierce every ear in the village before the fishermen jump, 20 per boat, into their large painted canoes. But whereas they were once able to remain in the bay, Senya Beraku's fishermen now go farther out to sea. Skyrocketing gas prices haven't made their lives any easier, and many crews travel around with serious gasoline debt hanging over their heads.

In the afternoon the canoes return from the ocean. But even before they have reached land, the villagers can see that the fishermen have returned empty-handed. “They sit and hang their heads,” explains Mortey. “If they have a good catch, you'd see them standing up and cheering in the canoe. But there hasn't been much cheering lately.”

Mortey has tried to convince the village's youth not to risk their lives to reach Europe, but several of them have returned from Italy with enough money saved to build a house or buy a car, and that kind of wealth impresses the other fishermen.

Death in the desert

The trip from Ghana to Europe begins with a journey across the Sahara Desert that those from the coastal areas fear. Out on the high seas fishermen believe they can deal with whatever goes wrong, but in the desert they feel helpless.

The trip from Accra to Tripoli that Samuel and his friends endured is almost 1,900 miles long and takes about a month. It crosses Burkina Faso, Niger and sometimes Algeria. The first part of the journey–by bus, to Ouagadougou, the capital of Burkina Faso, and then onto Niamey, the capital of Niger–is usually problem-free. Then it gets tough. The border areas of northern Niger, Algeria, Libya and Chad are notoriously unsafe. The caravans of people headed for Europe are easy targets for the armed bandits that patrol this desolate region.

Hans Lucht is a Danish journalist and anthropologist at the University of Copenhagen. This story was translated into English by Jacob Wheeler.

Under Trump, Undocumented Immigrants With COVID-19 Are Being Denied Care