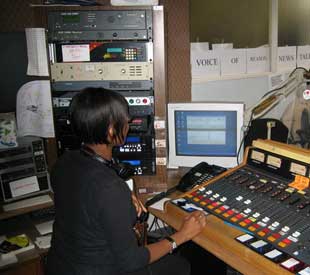 This October might be the last chance for local community radio stations to receive high-power licenses from the FCC.

The window may be short, but what happens during a one-week period in October could have lasting implications on how many local voices are heard when listeners turn their radio dial.

The Federal Communications Commission (FCC) is giving community-based non-profit organizations a chance–possibly their last–to snag some spectrum, or see the remaining high-power radio frequencies doled out to other groups competing for the airwaves. With what it calls the Non-Commercial Educational (NCE) full-power radio-licensing window, the FCC is allowing organizations just one week, from October 12 to October 19, to file for FM licenses, or risk being shuttered out of radio.

Media reform groups are urging eligible local, community-based groups–organizations with a noncommercial, educational mission–to apply for the licenses, warning that the opportunity may be “now or never.” They say this window is especially important as consolidation has altered the media landscape, making a diversity of viewpoints and voices a wish list, and localism a concept of the past.

“We think that all of the remaining frequencies are going to get snatched up during this window, which means that it’s extremely important that local, community-based non-profits apply for these licenses,” says Libby Reinish, a coordinator for the Prometheus Radio Project, a non-profit group that helps communities apply for radio licenses. “If they don’t apply for them now, their town or community might never get a radio station.”

Prometheus is part of a national coalition called Radio for People, which includes Free Press, the Future of Music Coalition and the National Federation of Community Broadcasters. (For a list of all its members, click here.)Radio for People helps communities navigate the mind-boggling application process and massive fundraising needed to start and run a non-commercial full-power radio station.

Prometheus says that to “pull off” the application, organizations will have to turn to a communications law lawyer and an engineer. The group estimates that anywhere between $25,000 to $200,000 is needed to build and operate a station.

Organizations can only go after open frequency in their region that does not infringe on existing stations, and are limited to channels between 88.1 MHz and 91.9 MHz on the FM dial. Because most full power frequencies in major cities are already taken, organizations within or near a city will not be eligible to apply.

Competition for the licenses is expected to be fierce. In a document outlining the application process, Prometheus warned, “You may think you are out in the sticks, but you may be in for a surprise when you submit the application and find yourself up against a church, a school district, a highway authority or a Charlie’s Angels fan club.”

The FCC is employing a point system to determine the winning applicant in cases where groups are competing for stations.

Reinish fears that some larger non-profits, including well-strategizing religious organizations, will “bulk file”–applying for dozens of licenses in a spin-the-wheel fashion, hoping to land on whatever frequencies are available.

Her fears have historical precedence. According to an analysis by Prometheus, during the 2001 window for low-power FM (LPFM) stations, 50 percent of the licenses went to Christian groups, with what Reinish calls “Big Christian Broadcasters” swooping up 25 percent of the spectrum. “There’s absolutely nothing local about it,” she said.

And maintaining local broadcasts, according to Radio for People and others, is key.

Yolanda Hippensteele, outreach director for Free Press, says broadcasters have been letting down the public they pledged to serve in exchange for free use of the airwaves.

“The whole radio industry has consolidated to a point where independent voices are stifled, public access to information is threatened, locally-produced content hardly makes it on the air anymore, and a lot of communities really aren’t represented on the airwaves,” Hippensteele says.

Specifically, women and communities of color are marginalized and forgotten in mainstream radio. A recent study by Free Press exposed astonishingly low levels of female and minority ownership of radio stations. While women comprise 51 percent of the U.S. population, women own only 6 percent of full-power commercial stations. Similarly, although racial and ethnic minorities account for 33 percent of the population, they own only 7.7 percent of stations.

“It’s one of the biggest problems we see on the radio dial,” Hippensteele says.

But while consolidated radio operates with blinders, programming at local, community-based stations can reflect the neighborhood.

“Think about flipping through the dial and landing on it and hearing one of your neighbors talking about an important issue right in your community. Or think about someone speaking your native tongue that you’ve never heard on the radio before,” Hippensteele says.

“First arrivals don’t know anything about how the water runs and don’t know their rights and don’t know where to go in case of something happening in their work place,” Reyes says. “[The station] gives the community this basic knowledge.

The CIW has used the station to organize farmworkers around its struggle for fair wages and working conditions, and has been a lone voice in alerting immigrant communities during hurricane season.

Reyes says the CIW considered applying for the high-power FM license, but opted against it because of the expense, among other factors. He encourages other communities to grab the stations.

“You’re really disconnected when all of the frequencies are taken by the conglomerate media,” he says. “The problems that people are facing in every community just fade away.”

The LPFM station in Portsmouth, N.H., is throwing its hat into the ring for a full-power license.

“The community likes [the LPFM station] so much, we’re getting constant requests for, ‘Are you going to go full-power? Are you going to reach out further?’” says Tim Stone, a founding member of WSCA-LP.

Stone says a high-power station would simply be an extension of the station that already exists. “Anyone can listen to it,” he says. “And anyone can get involved in it. There’s nothing else like it, and there’s hardly a better way to get information disseminated that’s available to everyone without any barriers.”

And the application process has been daunting and complicated. “You’re doing it on a volunteer basis, and you’re met with no assurance you’re going to get, or even have a chance of getting a construction permit,” Stone says. “In some respects, everyone thinks it’s a good idea, in other respects, it’s sometimes hard to get folks to buy into something that has no guarantee.”

While WSCA-LP will be able to cast a wider net to listeners with a high-power license, Stone says the main impetus behind their application is that low-power stations have secondary status, which means they can be bumped off the dial.

“If it weren’t for that, I don’t think it would be much of a necessity for LPFM stations to apply for the full-power stations,” he says.

Coincidently, as existing LPFM stations and local non-profits consider applying for the high-power licenses, a bill introduced in June would authorize the FCC to create thousands of new LPFM stations across the country. The Local Community Radio Act was introduced by Reps. Mike Doyle (D-Penn.) and Lee Terry (R-Neb.) and Sens. John McCain (R-Ariz.) and Maria Cantwell (D-Wash.).

These two different opportunities, says Hannah Sassman, an organizer with Prometheus, mark the “largest chance in a generation that these groups have had to get their own radio stations.”

For groups toying with the idea of applying for a high-power license, organizers warn that the October deadline is creeping up. They say people should start the application process immediately and can contact Radio for People for help.

“This is your chance to own the media,” Hippensteele said. “It’s now or never. I think it’s worth the scramble.”

Would We Already Have Had a COVID-19 Vaccine Under Socialism?