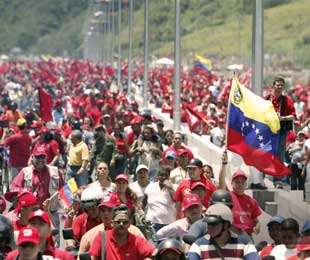 Supporters of Chavez cross the Caracas-La Guaira bridge, just after its inauguration on June 21, 2007.

The Trial (And Errors) of Hugo Chávez

Venezuelans are debating whether Chávez is putting the windfall of revenue from oil revenues to good use or squandering it through disorganization, corruption and misplaced priorities

In April 2006, after a failed attempt to demolish the structurally unsafe bridge on the highway connecting Caracas with the Port of La Guaira, the Chávez opposition expressed outrage at government incompetence. Manuel Rosales, the opposition candidate in the December 2006 presidential elections, accused President Hugo Chávez of “allowing the Caracas-La Guaira bridge to collapse” and “having inaugurated scores of public works projects without completing them.”

However, on June 21, 2007, President Chávez inaugurated a new bridge that is 180 feet high and half a mile long–longer than the original one. The construction was on schedule and in time for the kickoff of the America Soccer Cup. In a jab at the opposition, the main state-controlled TV channel declared, “You can’t cover up the accomplishment with a finger.” In another plus for Chávez, nine modern, well-designed stadiums were constructed or remodeled for the games, which Venezuela hosted for the first time in the Cup’s 90-year history.

Although the government won this round, the issues raised by the opposition resist easy answers. Oil prices are at record highs. And the nationalist Chávez has driven a hard bargain with the oil companies. They now pay 33 percent in royalties for the massive deposits of the Orinoco River region, up from 1 percent paid during the neoliberal years of the ’90s. Chávez not only counts on increased oil income to finance his experimental programs, but vigorous enforcement of the income tax system.

But Venezuelans are debating whether Chávez is putting this windfall revenue to good use or squandering it through disorganization, corruption and misplaced priorities.

The debate over government performance is significant because much of the country’s oil wealth is being invested in novel social programs to help the poor. Indeed, Chávez calls the model he aspires to create “21st century socialism,” which stresses solidarity and democracy from below and prioritizes social over economic goals.

In some ways, the current debate over government programs replays a conflict Venezuela faced during the oil boom of the ’70s. Neoliberals have bashed the ’70s and particularly the first government of Carlos Andrés Pérez for using the increased revenue to expand the role of the state in the economy without producing concrete results. Stanford political science professor Terry Karl refers to the experience of the ’70s as the “Paradox of Plenty.” Rather than foment development, she says the spike in oil revenue led to greater handouts, aggravating both dependence on the state and a climate of paternalism. Ironically, Pérez, who nationalized the oil and iron industries during those years, returned to power in 1989 to impose neoliberal formulas that were a fiasco and resulted in his ouster.

In the case of Chávez, both sides have overstated their case in regard to government spending. The Chávez government has made mistakes in administering social programs that cost huge sums and involved many people. Nevertheless, the programs that are working have begun to transform the lives of Venezuela’s poor, who were previously all but ignored by politicians.

Some of the opposition attribute alleged government ineptness to the lower-class makeup of the Chavista movement and the modest participation of educated middle-class professionals. In what could be interpreted as a slur on poor people who are viewed as dependent on handouts, Rosales referred to Chavistas as “parasites,” a remark that one of his allies, Leopoldo Puchi, considered inappropriate. Chávez, however, has inadvertently strengthened this charge by making disparaging remarks about government “bureaucrats,” and appointing ministers who lack professional experience.

More than any other program under Chávez, the balance sheet for the government’s new worker cooperatives is mixed.

In 2004, the government created the Ministry of the Popular Economy to organize training programs and facilitate loans to encourage those enrolled to form cooperatives. By 2005, Chávez traveled through the country to authorize loans for cooperatives in televised “Regional Cabinet Meetings,” where beneficiaries discussed their plans and answered questions. A large majority of the cooperatives consist of not many more than five members (the minimum number required by law) and engage in maintenance work for local governments and state companies such as the oil industry. Most of these cooperatives are made up of members of an extended family, a setup that generally functions well due to mutual trust among associates. Government spokesmen have hailed some cooperatives, such as those of fishermen, for challenging the control of monopoly companies.

One of the few large cooperatives is the Fabricio Ojeda, which consists of the 150 workers (all but one of whom are women) at the Venezuela Advances textile plant and 75 shoe-factory workers. The co-op’s health and educational facilities serve the residents of the surrounding lower-class community in the western part of Caracas.

Alida Bastida, one of the textile workers elected supervisor, gave a tour and proudly pointed to the eight sewing machines recently purchased by her cooperative, as opposed to other machinery donated by the state oil company. Asked about worker absenteeism, she says, “If the worker has a legitimate health problem, they can get time off and receive the same salary as everyone else. But at the end of the year our cooperative’s ‘surplus’ [profits] are divided up and distributed to each worker on the basis of the number of days worked.” Bastida says that last year the surplus that workers received almost equaled their annual salary.

But the failure of many state financed cooperatives–due to improvisation or misuse of government funds–has resulted in the loss of tens, if not hundreds of millions of dollars. On the other hand, those cooperatives that have withstood the test of time may contribute to the transformation of society, particularly because so many of their members come from the non-privileged sectors of the population.

The cooperatives are heavily dependent on the state. Government incentives include generous credit, lenient terms of payment and exemption from all taxes. One sign of independence is when the cooperative pays off its original loan and purchases its own equipment. At a conference sponsored by the University of Carabobo, one co-op member said: “It gave us great satisfaction to have paid off our loan in seven months. Now it is they [the state bank] who are behind us, urging us to apply for new credit.”

Experience has shown how difficult it is to decree such experimental changes in people’s lives from above. The government placed the number of cooperatives at 140,000 in 2006, but this year the Ministry of the Popular Economy announced that it counted only 74,000. Worse yet, a more recent census indicated only 48,000. Many cooperatives never got off the ground, and in other cases, cooperative members pocketed the money they received from loans or the down payments for contracts. One pro-Chávez congressman admitted, “Up until now, no one can say the cooperative program has been successful. In fact, there is little to show considering all the money that has been spent.”

In response, the Ministry has tried to exercise greater control over the cooperatives, but in doing so may have gone to an opposite extreme. The cooperatives are now required every three months to solicit a Certificate of Fulfillment of Responsibilities issued by the Ministry’s main office in Caracas. The paperwork, which includes a balance sheet signed by a certified accountant, is extremely time-consuming. The cooperative also needs to demonstrate solvency with regard to financial obligations to government agencies such as the social security system, the housing authority and the job-training institute.

Chávez and his followers generally attribute the problems facing cooperatives to their members’ lack of social consciousness. As a corrective, they call for a cultural transformation along the lines of what Che Guevara called the “New Socialist Man.” However, in its promotion of cooperatives and other social programs, the government faces a more practical problem that Chávez movement leaders haven’t recognized. Mechanisms have been created to monitor cooperatives, but to date there no cooperative member has been penalized for failing to comply with their legal obligations. Although Minister of the Popular Economy Pedro Morejón announced late last year that he had taken 300 cases of cooperatives to court, it is unclear whether Chávez, who claims to be the president of the underprivileged, will be willing to jail, or seize the property of, poor people who have misspent public money.

On the plus side, many cooperative members have learned administrative skills while at the same time changing their attitude toward cooperation and solidarity. By law, co-op members must work in their communities, carrying out maintenance service in schools, distributing Christmas presents to children or other tasks. Furthermore, the experience of sharing the profits of the enterprise breaks with the tradition of wage labor and is bound to influence the cooperativist’s way of thinking.

The “massification” of education at all levels

The education “Mission” programs, which also involve hundreds of thousands of underprivileged Venezuelans, have been more successful than the cooperatives. The Missions, which provide primary, high school and university education mostly to adults, use Cuban-prepared video cassettes in the classrooms and “facilitators” who answer questions posed by the students.