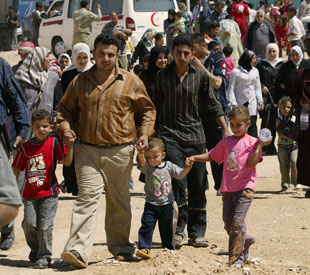 Palestinian refugees arrive in Syria from Iraq at the al-Tanf border crossing on May 9, 2006.

Threatened in Iraq, these refugees have no country to return to.

Within the narrow strip of no man’s land separating Iraq and Syria, nearly 400 Palestinian refugees have been forced into an impossible existence at the al-Tanf refugee camp. Aid organizations periodically deliver water, pre-cooked meals and meager supplies of medicine to the marooned inhabitants. Tents are their only protection from the sandstorms and the intense desert sun.

The situation of these Palestinians, who fled violence against them in Iraq, where they had lived for decades, is another consequence of the U.S. occupation and the bitter civil war gripping much of central Iraq. Worse, they are now refugees twice over. They can neither return to Iraq nor their own homes, for they have no nation to return to.

“What is happening there is one of the greatest tragedies brought about by the Iraq war,” says Kristele Younes of Refugees International, a Washington, D.C.-based organization advocating on behalf of displaced people around the world.

Um Rafat arrived at al-Tanf a year ago. “I was threatened by [Shi’a] militias, who said that one of my sons would be killed or kidnapped unless we left,” she says. “I left with my two daughters and one of my sons and left behind my husband and my older son.” The two men have since fled the family’s Baghdad home, she says, and are now living elsewhere.

Iraq has long hosted displaced Palestinians, who first settled there following the 1948 Arab-Israeli war. Subsequent groups arrived after the Six Day War in 1967 and the Gulf War of 1991, when Yasser Arafat’s support for the Iraqi invasion of Kuwait triggered anti-Palestinian sentiments in the Gulf. Over the years, others settled in Iraq seeking work. By 2003, the Palestinian population was an estimated 34,000.

Not all Iraqis accepted the refugees and Saddam Hussein’s past policies helped to foment animosity toward the Palestinians. By providing the refugees financial support, Hussein sought to boost his pan-Arab credentials, but it also kindled acrimony among some Iraqis, especially after U.N. sanctions crippled Iraq’s economy.

With Hussein’s ouster and the outbreak of full-throttled sectarianism following the February 2006 bombing of Samarra’s al-Askariyya shrine, Palestinians have increasingly become targets for killings and kidnappings. According to a September 2006 Human Rights Watch report, in March 2006, militants distributed flyers in Palestinian neighborhoods of Baghdad calling them “taqfiris,” or unbelievers, “Wahhabis, and usurpers” and warned them to leave or be “eliminated.” The report profiles numerous threatened and terrified Palestinians, whose numbers have since dwindled to an estimated 15,000 in Iraq.

As Palestinians such as Um Rafat and her family flee, they encounter closed borders, with few exceptions. Israel will not allow them to return to the West Bank or Gaza, much less settle within its own borders; Jordan and Syria argue that they each have a massive Palestinian refugee population already. Few governments outside the region have offered assistance.

So they remain at al-Tanf. “It is unbearable,” says Um Rafat. “The sandstorms are very hard for us. But if we close the door of the tent it will be very hot; if we open the door, it will be dusty inside. If we leave the tent we will have to face the burning sun.”

The climate isn’t the only factor making life hard at the camp. “We are having health problems,” says Abu Alaa, spokesperson for al-Tanf’s coordinating committee. “Some people have hypertension because of kidney problems. Some are having digestive problems because of the pre-cooked meals. And some are having eye problems from the dust storms.” Furthermore, according to the United Nations High Commissioner for Refugees (UNHCR), there have been five miscarriages at the camp since it opened in May 2006, and two women, one pregnant at the time, have attempted suicide. “Nothing in life has prepared them for this,” says Sybella Wilkes, regional spokesperson for the UNHCR. “The conditions there are totally unacceptable for extended human habitation.”

Near al-Tanf, on the Iraqi side of the border, Palestinians are gathering at another camp called al-Waleed, now home to more than 1,000 refugees. They endure the same harsh conditions as those at al-Tanf but are without much of the outside aid and face threats by Iraqi militias. “Al-Tanf–nobody should be living there,” says Wilkes. “At al-Waleed, it is 10 times worse; it’s the most inhumane environment.”

“The lack of political will on the part of the international community is equally outrageous,” says Younes. “The only solution for these people is resettlement.”

But the crucial question–where–remains unanswered.

During a recent survey of the refugee situation in Jordan and Syria, Craig Johnstone, deputy head of UNHCR, told IRIN news service: “We are in touch with a couple of countries where we have some hope, but we don’t have a ‘yes’ yet.”

Meanwhile, as the numbers at al-Waleed continue to grow, Um Rafat and other Palestinians at al-Tanf wait out the summer heat and dust, which will soon give way to rain and certain floods.

Robert Eshelman's articles have appeared in The Brooklyn Rail, In These Times and The Nation.