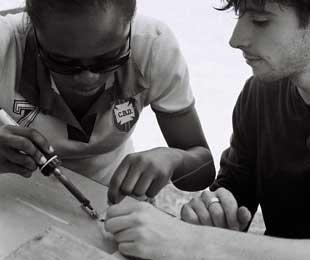 Building a tower at the Malcolm X Grassroots Movement Barnraising in Greenville, S.C.

The Promise of Low Power FM

The voices aired on low-power stations include evangelists, social critics, tomato pickers and indie rockers–all linked by the credo that radio should reflect the heterogeneity of the communities it serves

The movement to develop alternatives to mainstream corporate-owned radio got a boost recently with a bi-partisan congressional bill to expand low-power FM (LPFM), a class of frequencies devoted to non-commercial community groups. Though LPFM stations only broadcast a radius of three-and-a-half miles, they offer the chance to bring seldom-heard voices on the air.

Media activists and reform groups see LPFM as a cheap, accessible medium that counterbalances the formulaic music and news of conglomerates like Clear Channel, while offering ownership and control to underrepresented groups. A recent study by the media-policy think tank Free Press found that women own 6 percent of the country’s full-power commercial radio stations; people of color and ethnic minorities control just 7.7 percent. It can cost as little as $5,000 to launch a no-frills LPFM station. About 800 stations have been established since the Federal Communications Commission (FCC) began licensing them in 2000.

The voices aired on low-power stations include evangelists, social critics, tomato pickers and indie rockers–all linked by the credo that radio should reflect the heterogeneity of the communities it serves.

Low-power broadcasters that are driven by a public mission “are only able to succeed because they are authorized by the local community,” says Hannah Sassaman, an organizer with the Prometheus Radio Project, a Philadelphia-based independent radio advocacy group.

Prometheus has led the grassroots push for LPFM and is now building support for the Local Community Radio Act of 2007, introduced in June by Reps. Mike Doyle (D-Penn.) and Lee Terry (R-Neb.) in the House, and Sens. Maria Cantwell (D-Wash.) and John McCain (R-Ariz.) in the Senate.

The bill would repeal strictures that have stunted LPFM’s growth. In 2000, lawmakers passed rules that in effect restricted LPFM to rural areas, after industry interests alleged that their “interference” would impinge on full-power broadcasters. But new research from the FCC shows that expanding low-power radio, even in denser markets, would not disrupt existing stations. Nonetheless, the National Association of Broadcasters recently reprised its warnings of “inevitable interference,” while opposing the bill.

One barnraising alumnus, the Florida-based Coalition of Immokalee Workers (CIW), has used LPFM over the last four years to organize some of the country’s most vulnerable laborers. CIW broadcasts on political and labor issues to Haitian and Latin American farm workers in their own languages, and provides safety information when hurricanes hit.

“Through LPFM, our communities can have an independent voice, whose commitment is to the community itself and not to any other interests,” says CIW Co-Director Lucas Benitez. “It gives us a place to analyze the problems we face daily, and a place to look for solutions together.”

“If we did not have this type of media democracy, people would not have the opportunity to educate themselves and move themselves up,” says John Freeman, one of the station’s founders. “[Full-power media] only wanted to control what these people could hear. It was a disgrace.”

“This is a perfect way for our generation to create our own institutions, run by our own people,” says Clemente.

Michele Gutierrez, an organizer with the Bay Area-based Youth Media Council, which focuses on media as a tool for social change, says LPFM is a promising platform for a broader movement.

“We must continue to challenge a media system controlled by the privileged few,” she says. “The power to communicate, and therefore the power to transform society, belongs to everyone.”