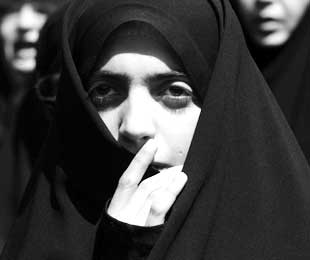 Muslim women’s bodies are too frequently used to symbolize the state of Islam in Iran, and the degree to which it associates itself with the West

The cover of the July 21 Economist touted an article about Iran’s push to develop nuclear weapons. But the accompanying photo, filling the cover along with the article’s title, “The Riddle of Iran,” presented a sea of figures in black chadors, floor-length cloths used by some Muslim women to cover themselves–despite the fact that the article said not a word about Iranian women. The riddle of Iran, the photo suggested, is the way that it teeters between modernity (the development of nuclear weapons) and antiquity (the omnipresent chador).

By using the image of the covered Muslim women to question the modernity of the Iranian state, the Economist reflects an entire history of Western interactions with Muslim women. As Nima Naghibi argues in Rethinking Global Sisterhood: Western Feminism and Iran (University of Minnesota Press), Muslim women’s veiled or unveiled bodies are frequently used to symbolize the Iranian state as a whole, and particularly the degree to which the state associates itself with the West.

Rethinking Global Sisterhood is a book that not only tears apart stereotypes and assumptions about the significance of Muslim women’s dress, but levels harsh critiques against those feminists who invoke “global sisterhood” as their cause while perpetuating colonial attitudes of superiority toward their veiled “sisters.” Western-minded Iranian nationalists and liberal feminists have generally viewed the veiled woman as a symbol of a primitive era, but Naghibi argues that the reality is more complex.

The interpretation of “hijab” (modest clothing) has varied greatly between cultures, classes and time periods. In early 20th century Iran, for example, middle- and upper-class women often wore a chador and facial veil. Full concealment was a sign of higher class status, because it indicated that one did not have to work in the fields. (Peasant women traditionally wore simple, loose clothing with a headscarf.)

As Iran sought stronger identification with Western values in the 1930s (under the rule of Reza Shah Pahlavi), the veil became seen as a marker of a tribal past, and “modern” middle-class women discarded it. But by the 1960s, the symbolism had again reversed. Unveiled women were associated with a sinful, corrupt West, and women veiled themselves to proclaim their virtue and, more, importantly, to protest against the Pahlavi dynasty. Following the shah’s ouster, many women removed their veils, which sparked a backlash from those men who believed women should not have a choice in their dress; the women responded by taking to the streets of Tehran for several days of women’s rights demonstrations.

Naghibi also examines the ways the state has regulated Iranian women’s dress in order to promote or reject an association with the West. In 1936, Reza Shah Pahlavi (the first of Iran’s two emperors) banned veiling, as part of an attempt to “modernize” Iran. Women who resisted the ban had their veils ripped from their bodies. Naghibi suggests that the 1936 ban was, in many ways, quite similar to the ban on unveiling that would be imposed in 1983. Both pieces of legislation, at their roots, attempted to use women’s bodies to promote a particular form of nationalism, whether Westernized or anti-imperialist. “Beneath these two polarized representations,” she writes, “lies a desire to possess and to control the figure behind the veil by unveiling or re-veiling her.”

Naghibi suggests that the visibility of Muslim women–whether veiled or unveiled–has caused a great deal of anxiety for Western feminists, who have largely ignored the indigenous presence of Muslim women’s activism. During the Constitutional Revolution (1905Ð1911), for example, Iranian women participated in protests, acted as couriers and even took up arms. Naghibi argues that such actions threaten feminists’ perceptions of themselves “as liberated and modern in contrast to imprisoned and backwards Persian women, and … as leaders of the international women’s movement.”

Seventy-five years later, little had changed. The feminist writer Kate Millet gushed about the Iranian women’s demonstrations in 1979: “It’s a whole corner, the Islamic world, the spot we thought it would be hardest to reach, and wow, look at it go!” It was as if the only possible reading of the situation, for Millet, was to see the demonstrations as the direct result of Western feminism’s influence, rather than something Iranian women were seeking on their own and for themselves.

Millet had been one of a handful of Western feminists (including Betty Friedan and Germaine Greer) who visited Iran in the ’70s and invoked the solidarity of “global sisterhood.” But their incursion, Naghibi argues, actually undermined women’s struggles in Iran, both by encouraging the growth of an elite feminist movement that neglected lower class and rural women, and by creating an association between feminism and the West–an association that made it easy for the women’s movement to be crushed in post-revolutionary Iran, when anything Western was seen as counter-revolutionary and dangerous to the state.

Naghibi’s critique of “global sisterhood,” a concept prevalent among feminists since the ’70s, is by no means new. Feminists of color have been arguing for decades that women’s experiences differ greatly between classes and ethnicities–to say nothing of the fact that the vanguard of such a “sisterhood” has tended toward the white and middle-class. But today, Naghibi writes, the “discourse of sisterhood” in the West has led to “a merging of interests between liberal feminism and a xenophobic nationalism. … [an] uncritical support of the Bush and Blair administrations’ rhetoric of the ‘us/them’ divide, the ‘civilized world versus the terrorists.’ ”

In November 2001, Laura Bush delivered a tear-jerking appeal during the weekly presidential radio address to save the women of Afghanistan from their imprisonment under the Taliban. She invoked the familiar representations of the “oppressed Muslim woman” and the “civilized Western woman” who needs to intervene on her behalf. For feminists who recognize such appeals for what they are–window dressing for imperialist ambitions–it is time to rethink global sisterhood.