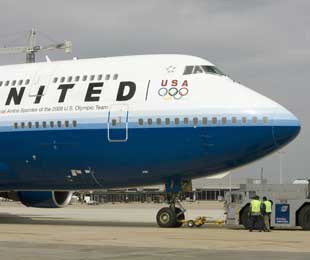 As the FAA seeks to expand air travel, is it giving concerns about aviation’s effects on climate change the attention they deserve?

As the Bush administration moves forward with plans to double or triple air traffic capacity by 2025, the government may be placing concerns about aviation’s impact on climate change on stand-by.

Congress created the Joint Planning and Development Office (JPDO) in 2003 to institute the Next Generation Air Transportation System (NextGen), a program designed to transform America’s air traffic control system to allow for increasing air travel. NextGen is housed within the FAA, but includes representatives from the Departments of Transportation, Defense, Homeland Security, and Commerce, as well as from NASA and the White House Office of Science and Technology Policy.

The NextGen program boasts several new technological reforms that promise to “significantly [increase] the capacity, safety, efficiency, and security of air transportation operations.” But while the FAA maintains that climate change is a pillar for NextGen, mixed messages abound about the strength of the foundation.

Despite repeated calls from the international community to take immediate and urgent action to mitigate climate change, the JPDO says its hands are tied on moving quickly, citing the general scientific consensus that uncertainties exist in linking aviation with climate change. In stark contrast to the European Union, which has identified aviation’s climate effects as the “most significant adverse impact of aviation,” the United States has placed “air quality and noise … [as] the current focus of attention,” according to a 2004 FAA report.

While the FAA calls climate change “the most serious long-term environmental issue,” two consecutive NextGen progress reports to Congress in 2005 and 2006 have failed to include any mention of climate change, much less how the overhaul of the aviation system might lead to an increase in the greenhouse gas emissions that contribute to climate change. Instead, both reports only highlight noise pollution and local air quality as key environmental issues affecting aviation’s capacity for growth. Climate change does not make this list, nor does the JPDO suggest that they are considering how capacity growth will affect climate change.

Even NextGen’s website sends a conflicting message about its environmental priorities. Although the site says the program is “thinking green,” it does not refer to climate change outright, only “fuel consumption, in its list of “primary environmental concerns.”

Rick Piltz, director of Climate Science Watch, a watchdog group sponsored by the Government Accountability Project, published a report in July criticizing the FAA for neglecting climate change in the congressional reports. “If you’re doing strategic planning and you’re reporting to Congress about the stuff you’re doing, shouldn’t you at least be talking about how a global warming emissions reduction policy would have some implications for the future of aviation policy?” Piltz asks.

Piltz says the FAA’s failure to confront climate change is characteristic of an “anti-regulatory and anti-preparedness” administration that is notorious for soft-pedaling the issue.

“The Bush administration has a specific way of dealing with climate change, which is, ‘We will not regulate emissions, we will manipulate or ignore the intelligence about the problem and the implications in order to conform to our political message, and we will leave us unprepared,’” Piltz says. “[NextGen] is just one more example. Inside the government, Bush administration officials are steering conversation away from the connection between aviation and global warming, instead of putting it out on the table.”

But Carl Burleson, head of the JPDO Environment Working Group and director of the FAA Office of Environment and Energy, criticizes Piltz’s study for being factually inaccurate. In particular, Burleson points out that, despite Piltz’s claims greenhouse gas emissions from planes have been increasing, Bureau of Transportation statistics show CO2 emissions from jet fuel have actually decreased by 5 percent since 2000, despite a growth in capacity.

Burelson also disputes that NextGen’s failure to specifically mention climate change in its recent reports means that the FAA is indifferent to the problem. He says the progress reports focused on issues that could immediately affect aviation growth, such as noise pollution, but that climate change and energy are not seen as “immediate issues in terms of constraining capacity growth, but as potentially long-term issues.”

“[Climate change] is not an immediate issue on capacity,” Burleson says. “There are certain environmental factors that restrain the capacity of the aviation system in the United States today, and certainly noise and local air quality are two of those that definitely have impacts on the ability of airports to expand, and basically the relationship between communities and airports. Climate is not in that category yet.”

But while Burleson justifies climate change’s nonappearance as a capacity issue, a 2004 report from the FAA to Congress discussing the environmental effects of air transportation noted, “Immediate action is required to address the interdependent challenges of aviation noise, local air quality and climate impacts.”

Much is still unknown about aviation’s effects of climate change. In 2006, the FAA took a step toward unlocking some of the mystery by co-hosting a workshop in Boston to specifically examine climate change and aviation. A published report of the workshop stated, “The effect of aircraft emissions on the current and projected climate of our planet may be the most serious long-term environmental issue facing the aviation industry.” The workshop, attended by experts and academics, concluded that scientific uncertainties are slowing any plan to tackle aviation’s climate impact, and laid out a roadmap to conduct further research. The call for more research was sounded again this year by the JPDO’s Environmental Working Group plan, which reiterated the need to “gain sufficient knowledge of climate change effects of aviation.”

Burleson says a better understanding of aviation’s climate impact would lead to a more appropriate approach. “We don’t want to in essence be targeting the wrong action, and creating more of an issue,” he says.

Piltz agrees that more research needs to be performed, but he lambastes the FAA as waffling under an “exaggerated sense” that there’s “too much scientific uncertainty” to take any action. “So all they will say is, ‘Yes, we’re talking about climate change. We acknowledge that it’s an issue so we’ll study the uncertainties and get back to you,’” Piltz says.

The JPDO maintains that NextGen, while adding more planes to the sky, will be better for the environment, as it creates more direct plane routes and a quieter, more fuel-efficient descent approach for planes. FAA Administrator Marion Blakey has lauded NextGen’s environmental merits, claiming during a speech in June that “[a]t the very heart of our NextGen plan, we’re taking a comprehensive and systematic approach to reducing [aviation’s emissions] footprint.”

But while building NextGen’s environmental credentials, Blakey and other government officials have condemned the European Union for taking more decisive action on climate change and aviation; The EU is considering including air carriers in a carbon dioxide emissions trading scheme, which would subject American planes to regulation. In a May speech, Blakey said, “Trying to force a European solution on the world, given the different aviation sectors, economic circumstances, and environmental issues of countries, is unworkable, not to mention illegal. In Europe, there are factions working to curtail aviation growth regardless of the benefits we offer to the economy and quality of life.”

The airline industry has also claimed that economic growth is at odds with environmental sustainability. According to a 2007 survey conducted by Sabre Airline Solutions, only five percent of North American airlines view environmental issues as a major challenge, while a majority ranked fuel costs as a pressing concern.

“As long as U.S. carriers are focused on survival and rebuilding their balance sheets, and their regulatory climate is not pushing hard, they will not likely embrace environmental concerns as much as European or other regions’ carriers,” Steve Hendrickson, Sabre Airline Solutions senior strategist, said in a press release.

“We did try to invite onto the Environmental Working Group a number of environmental groups early on, but frankly they weren’t terribly interested because they said they had a lot of different things they were working on, and relatively speaking, aviation wasn’t their focus at that point,” Burelson says.

Congress is partly responsible for the lack of environmental representation on the JPDO Board and for climate change’s poor representation in NextGen’s progress reports. In legislation creating the JPDO, Congress did not mandate the inclusion of the EPA or the Department of Energy as members. There is also no mention of climate change in the legislation, and only a vague order to review “activities relating to noise, emissions, fuel consumption, and safety conducted by Federal agencies.”

The Bush administration’s ramping up of air travel comes at a time when an increasing number of voices are calling for consumers to curb the amount they fly. A 2007 press release from the UK chapter of Friends of the Earth said, “We need to fly less, buy less, regulate polluters and support communities affected by pollution and climate change.” The FAA says aircraft emissions account for 2 to 3 percent of the total U.S. greenhouse gas emissions.

Piltz says he understands why there’s resistance to reducing flying because it’s “not going to be comfortable to deal with.”

“To say cut back on going to the airport? It flies in the face of the whole concept of being a modern society,” he says, “But I don’t think the way to deal with that as a democratic society is to avoid talking about it.”