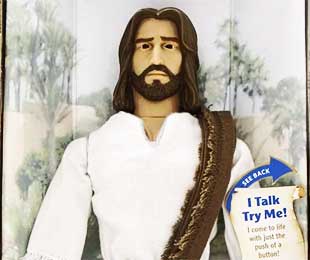 The missed opportunities are regretful. Goliath is barely taller than David. Jonah is inexplicably bigger than the whale is he's supposed to fit inside. And where the hell is Satan?

“Who will win,” he asked, looking up at me, “Spider-Man or Moses?” We discussed their relative strengths, and he settled on the superiority of Spider-Man. The Moses toy had only a big staff in one hand and a couple stone tablets in the other–not very impressive next to Spidey’s web-slinging power. Also, my son reasoned, Moses, with his long white beard and bathrobe, looked “too old” for serious battle.

This kind of bizarre conversation may soon be repeated all over the country when the Tales of Glory action-figures start selling at Wal-Mart stores this fall. A company called “one2believe” is marketing the faith-based dolls “to find a way to help children learn vital Bible lessons via Scripture and to ultimately come to faith in Jesus,” says founder David Socha. one2believe is the Biblical Doll Division of the Beverly Hills Teddy Bear Company of Valencia, Calif.

I asked Socha which dolls are hot sellers. “Our talking Jesus doll, that teaches children scripture, seems to be the bestseller on all fronts,” he replies. The Beverly Hills Teddy Bear Company has been selling the 12-inch talking “Jesus, God’s Son” since 2005.

Jesus, who looks remarkably like the Brawny Paper Towel Man, has kung-fu grip and utters soothing but authoritarian Bible quotes, like, “I tell you the truth, no one can see the kingdom of God unless he is born again” (John 3:3). This lumberjack-like Jesus made some headlines in 2006 when the Toys for Tots organization (a branch of the U.S. Marine Corps Reserve) refused a donation of 4,000 of the dolls for its annual Christmas drive. The irony of turning down Jesus toys for Christmas seems too obvious for comment, but Toys for Tots worried that children on the receiving-end of these donations may not be Christian and therefore it could seem more like a missionary gesture than plain charity. A few days later, however, Toys for Tots reversed its decision and accepted the Jesus dolls, saying simply that they had “found appropriate places for these items.”

Now the makers of talking Jesus have a new line of PVC figures (made in China), and for the first time Wal-Mart, the biggest toy retailer in the United States, is on their side. Starting this fall, around 500 of Wal-Mart’s stores will begin to carry “Daniel and the Lion’s Den,” “David and Goliath,” “Jonah and the Big Fish,” “Noah’s Ark,” and “Jesus Walks on Water” (complete with a shocked-looking fisherman and boat). Kids can recreate the Bible episodes using the figurine sets, and read a pamphlet with the scriptural references for the stories.

“I think the market is ready,” Socha explains. “It’s the boomerang effect. There is such a plethora of ‘evil’ or non-moral toys, and the market is void of faith-based toys that teach about Christianity.”

Socha’s one2believe, which once catered to small religious retailers, is positioning itself to move beyond the Christian demographic, offering an alternative to the secular toy market–a market that, it must be admitted, primarily sells violence to young boys (G. I. Joe, Marvel Superheroes, swashbuckler pirates, etc.), and trampy dress-up to young girls (Barbie, Bratz, etc.). Like the popular American Girl phenomenon, one2believe hopes to engage kids with toned-down educational toys.

If you’re pining for more righteous God-fearing piety in your child’s life, then these toys deliver the goods. For the rest of us, the evangelical tone of the dolls is somewhat disconcerting. Socha told me that one of the central goals of the toys is to “spread the gospel.”

Of course, like a Dreamworks version of Moses (Prince of Egypt) or a Disney version of the Chronicles of Narnia, one can still read these toys as significant cultural, historical characters and narratives. Any of the Old Testament toys, for example, can appeal to Jewish and Muslim tots as well as Christians, and even atheists and agnostics probably want their kids to know who Samson, Noah and, of course, Jesus were.

“These look a lot better than most,” says Adam Demuro, father of two and manager of Holy Name Cathedral Bookstore in Chicago. “I go to a lot of Christian merchandise tradeshows, and these [Tales of Glory toys] look nicer than the lame alternatives. Most of the stuff I see in religious stores looks like bad recycles of ’70s dolls.”

“This is just one more example,” says Demuro, “of how Protestants have married together their faith and modern marketing. I don’t know if I agree with that, but they certainly are successful. I’ll bet they make a lot of money on this stuff when it hits Wal-Mart.”

They may look more attractive than previous attempts, but that doesn’t mean they’ll make good toys. Raphael Salazar, a 36-year-old construction worker and father of one from Chicago, says that he’d like his kid to play with the dolls, but “kids make up their own minds.”

“It doesn’t matter what the parents like or push,” says Salazar. “I like the fact that these toys don’t have guns, but only my kid can decide whether it’s fun to play with.”

The problem is that, as “action-figures,” all these dolls are disappointing–they have an extremely small range of motion, come with accessories that few kids would find interesting (e.g., Moses comes with a “bush covered with locusts”) and even the “bad guys” (e.g., Goliath and Pharaoh) are painfully cute. The Tales of Glory toys look designed more for middle-aged curio collectors, who might put them in their vitrines, next to Franklin Mint Lady Di dolls and Precious Moments tchotchkes.

Moreover, the missed opportunities are regretful: Goliath is only a smidgen taller than a boyish David; Jonah is inexplicably bigger than the whale he’s supposed to fit inside; and no seven-headed dragons (Revelations) or Leviathans (Book of Job, Psalms) or Behemoths (Book of Job) will appear in the Tales of Glory series. If the toymakers want to capture the fantasy market, currently dominated by the unapologetically pagan Harry Potter dynasty, they will have to draw on the Bible’s darker elements. Where the hell is Satan?

Perhaps the “father of G.I. Joe” Don Levine will come to the rescue with a more flexible set of Biblical action-figures. In 1964, Levine released the famous G. I. Joe doll for Hasbro, and now he’s bringing out the Almighty Heroes line of action figures, based on the various champions of the Old Testament. Like one2believe, Levine’s corporation, Family Values, LLC, is offering heroes like Moses, David, Noah and female heroes like “Deborah the Warrior” and “Queen Esther.” But while these figures seem designed more for “action,” they look positively ridiculous. All the male characters are just repainted versions of the same guy, and the paintjobs are inexplicably weird (e.g., Noah looks like a Green Bay Packers linebacker, and David looks like a spaceman/aerobics-instructor hybrid). Never mind. The goal of Levine’s series is to offer “inspirational resources for today’s modern family.” But unlike the Tales of Glory, these inspirations are not available at Wal-Mart. The Almighty Heroes are still relegated to the strictly religious retail avenues–Bible-Belt stores and websites like DeeperShopping.com.

All these Biblical dolls, as such, are just a trifle really, but they also typify a more worrying cultural trend. Contemporary religious media has unprecedented power these days to create a kind of “religious matrix” that completely surrounds the believer. True believers, for example, can elect to home-school their kids with Christian textbooks, can listen to religious radio for Christian music and talk-shows, do their financial planning with Christian investment firms, get all their news from Christian TV and websites, dig up their “science” from creationist museums and books, play with religious action figures, and generally avoid the wider public culture altogether. It’s not the Christianity that’s troubling here, but rather the self-imposed cultural segregation.

Of course, it could be argued that, relative to other forms of zealotry (which include sanctioned violence), this American brand of blinkered religion is harmless. Perhaps the new American religious crusader, who sees himself as a “David” facing a secular “Goliath,” will simply distinguish his piety by buying righteous stuff. The mega-store might well be the new American battlefield between the sacred and profane.

Stephen T. Asma is a professor of philosophy at Columbia College in Chicago. He is the author of numerous articles and books, including On Monsters: An Unnatural History of Our Worst Fears and Why I am a Buddhist (both forthcoming in 2009); The Gods Drink Whiskey: Stumbling Toward Enlightenment in the Land of the Tattered Buddha; and Stuffed Animals and Pickled Heads: The Culture and Evolution of Natural History Museums. His Web site is at www.stephenasma.com.