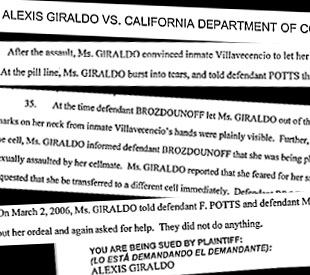 Alexis Giraldo is suing the California Department of Corrections and Rehabilitation to bring abuses of transgender prisoners to light.

A recent study by the San Francisco-based Transgender, Gender Variant and Intersex Justice Project on rape in California prisons found that 59 percent of transgender people reported being sexually assaulted in prison in 2006, compared to 4 percent of the general prison population

Alexis Giraldo, 30, a male-to-female transsexual was sent to Folsom State Prison, a men’s facility in California, in January 2006 for a misdemeanor and separate parole violation.

While there, she was repeatedly beaten and sexually assaulted, she says. According to her testimony, an abusive cellmate considered himself to be her “husband,” and Giraldo made numerous requests to guards and healthcare workers for a transfer to a different facility. She says this yielded no protection. The California Department of Corrections and Rehabilitation claims it moved her to a different unit as soon as physical evidence of abuse was clear. (Giraldo’s injuries included visible signs of strangulation and cuts from a boxcutter.)

“It’s been a nightmare,” Giraldo says. “They are doing people wrong, and they are covering it up.”

A recent study by the San Francisco-based Transgender, Gender Variant and Intersex Justice Project on rape in California prisons found that 59 percent of transgender people reported being sexually assaulted in prison in 2006, compared to 4 percent of the general prison population.

Transgender people become targets in part because, in California, as in most other states, the prohibitive cost of surgeries, therapy and hormones prevents many transgender people from acquiring legal sex changes, which can land people who live as men into women’s facilities, and people who live as women into men’s facilities. While incarcerated, many transgender prisoners have difficulty acquiring hormones, and none have access to surgery while serving time.

In March, Giraldo filed suit in order to bring abuses of transgender prisoners to light, she says. She sued seven employees of the California Department of Corrections and Rehabilitation for negligence, infliction of emotional distress, and violations of the state constitution’s prohibition against cruel and unusual punishment.

But well into the trial, Judge Ellen Chaitin of San Francisco Superior Court dismissed allegations of negligence and cruel and unusual punishment on the grounds that prison guards do not have the duty to protect inmates, but allowed the claim of intentional inflection of emotional distress to stand.

Kelani Key, a member of the Trans/Gender Variant in Prison Committee, is no stranger to the kind of violence Giraldo’s trial brought to light.

“I was raped, beat up, ridiculed,” says Key, who has been incarcerated seven times. She says verbal abuse and other forms of discrimination are a problem, as well: “A lot of it comes from the staff. If we complain about anything, they put us in the hole. Either you shut your mouth, or you open your mouth and you go to the hole.”

Key says the Trans in Prison Committee has gotten calls from transgender people around the state describing similar experiences–some even call collect from prison.

Tumeka Godwin, director of the Digital Storytelling Project, which details the experiences of women of color who have been incarcerated, says transgender people who suffer prison abuse have little recourse, and suing is rarely an option considered. “A lot of the women that are incarcerated have no kind of home stability, they can’t find a job and they have to turn to the streets to survive,” she says. Godwin was sexually assaulted in a San Francisco jail and settled a case out of court in 2000.

According to the Transgender, Gender Variant and Intersex Justice Project, 75 percent of transgender people in San Francisco are without full-time employment. Sixty-five percent of male-to-female (MtF) transgender people have spent time in prison or jail, as well as 29 percent of people who identify as female-to-male (FtM)–rates far above that of the general population.

On Aug. 2, Giraldo’s trial ended with a hung jury, but she has already filed an appeal. She says she will bring back allegations of negligence and cruel and unusual punishment.

“Nobody should go through that,” she says, “regardless of what you’ve done. I’m not the first, and if things don’t change, I won’t be the last. I’m doing this so people can know what’s going on in there.”