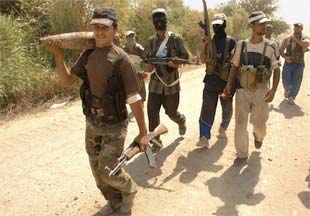 A volunteer with a 155mm artillery round, is escorted by fellow volunteers in Tuwaitha, on Sept. 5.

Is the Pentagon’s neighborhood watch strategy protecting Iraqis or stoking the civil war?

The U.S.-led coalition forces in Iraq have gone populist, empowering a “movement” of local sheikhs, former insurgents and ordinary Iraqis–encouraging them to take up arms and patrol their communities for themselves. “Concerned Citizens Groups,” which military representatives describe as similar to “neighborhood watch groups,” have become a centerpiece of U.S. strategy.

The model takes its inspiration from the summer’s “Anbar Awakening,” in which Sunni sheikhs, fed up with insurgent brutality, enlisted U.S. support to drive them out of their villages. The movement has now taken on a life of its own.

“They are coming to us,” U.S. Army Col. Wayne Grigsby told In These Times in a phone interview from Forward Operating Base Hammer, in Diyala, just east of Baghdad. “It’s grassroots. I don’t usually use that word, but that’s what it is.”

However, unlike most grassroots movements, a lot of money is involved. Those who have signed contracts with the U.S. military earn about $300 per month for their services–more than three times Iraq’s average monthly per capita income. They also receive $50 to $100 bonuses for “actionable intelligence.”

But it’s only after these Concerned Citizens drive al Qaeda and other insurgents out of an area that their communities can become eligible for a windfall of development projects, including electrical wiring, running water, medical assistance and additional work.

“Basically, the tribal leaders are realizing that if they don’t participate, they’ll be left behind as security and services improve,” Army Col. David Sutherland told a virtual “bloggers’ roundtable” in October.

Recruitment hasn’t been a problem. As of Oct. 20, there were 67,000 Concerned Citizens across Iraq, organized into 180 groups in 12 of the country’s 18 provinces, according to Army Col. Martin N. Stanton, chief of reconciliation and engagement operations. The vast majority of Concerned Citizens (79 percent) are Sunni, while 9 percent are Shiite and the remaining 12 percent are “mixed.”

Concerned Citizens take an oath of allegiance to the Iraqi government, sign a contract, receive basic training from U.S. forces and are given some type of uniform–be it a vest, an armband or a jacket–to distinguish them from enemy combatants.

Although the rules of engagement vary depending on local conditions, Concerned Citizens are typically contracted as “security guards,” tasked with protecting infrastructure. Sometimes that means patrolling neighborhoods and villages, or seeking leads on insurgents’ plans and whereabouts. Other times it means integrating into missions led by the U.S. or Iraqi Armies.

Some Concerned Citizens groups go by names like Iraqi Police Volunteers and Concerned Local Nationals. Others have gang-like names for their regions, such as the Baquba Guardians. They are expected to provide their own weapons, usually AK-47s or newer rifles bought with their earnings.

Military officials, including Stanton, admit that “many of our former opponents” have made their way into the ranks, despite a screening process intended to weed out former enemy combatants.

The number of roadside bombs has decreased by an astounding 60 percent in the past four months. U.S. casualties are at the lowest monthly rate since February 2006. And, perhaps most importantly, many Iraqis report feeling safe enough to leave their homes and send their children to school.

“[Iraqis] want their families to have a better life,” Grigsby says. “It’s like us–we want power, we want to give our kids clean drinking water, we want them to have some chow and go to school and be safe and educated.” He added: “They are getting tired of insurgents.”

Critics say that while substantial security gains have been made, the new strategy is ultimately short-sighted and, moreover, in direct conflict with the Bush administration’s ultimate goal–national reconciliation.

“Arming all sides in this civil war is just going to create a bloodier conflict,” says Sean Duggan, special assistant to the National Security team at the Center for American Progress. “We don’t give them weapons, but we give them money, which is the same thing.” He calls these groups “a short term solution that in the long run is going to blow up in our faces.”

However, according to Grigsby, the military is implementing measures to counteract that very real threat. “We’re keeping our eyes on them,” he says. “That’s why their contracts come up every 60 to 90 days.”

The military also attempts to rein in Concerned Citizens groups by prohibiting them from conducting unilateral operations. But it is a rule not all recognize. In mid-October, a group of 17 Concerned Citizens in Sutherland’s area of operations in Baquba captured prisoners, amassed their own weapons cache and sexually assaulted a local girl, according to the Multi-National Force press team.

Critics, including Prime Minister Nouri al-Maliki, fear this type of renegade behavior might become more prevalent as Concerned Citizens, many of whom already distrust the Shiite-dominated central government, morph into armed Sunni militias, emboldening tribal strongmen and challenging the legitimacy of the central government.

In early October, al-Maliki threatened to rein in the program after accusations emerged that a Sunni Concerned Citizens Group in Baghdad was complicit in kidnapping, blackmail and murder.

“We demand that the American administration stop this adventure,” his United Iraqi Alliance Party said in an early October statement. “We refuse and denounce giving protection to those terrorists who committed hideous crimes against the Iraqi people and allowing them to be responsible for security.”

The feeling is mutual. Many Sunnis view al-Maliki’s government with suspicion and charge that al-Maliki himself is a puppet of Iran. The August U.S. National Intelligence Estimate acknowledged that Sunni cooperation with Coalition Forces has “not yet translated into broad Sunni Arab support for the Iraqi government or widespread willingness to work with the Shiites.”

Former Defense Secretary and member of the Iraq Study Group, William J. Perry, echoed that observation in his testimony before the Armed Services and Foreign Relations Committees in September. He said that the Concerned Citizens Groups “could become a liability if they turned against the Shiite militias or even Iraqi government forces.”

According to Ret. U.S. Lt. Gen. William Odom, the situation is becoming one in which the U.S. army is “arming the enemies of the government whose election and legitimacy we sponsored.”

“The muddled, contradictory and ludicrous nature of this policy would deserve a horse laugh if it were not so tragic,” says Odom, who served as the Army’s senior intelligence officer under Reagan. There is “no example where stable states were created by diffusing weapons and power to local and regional groups.”

Supporting “friendly” militias has backfired on multiple operations–most notably Afghanistan, where the U.S. government armed the mujahadeen and Osama bin Laden in its battle against the Soviets.

Empowering locals to “police” their neighbors also backfired in Vietnam in the ’70s and Guatemala in the ’80s, where the strategy added additional weapons and training to already-bloody conflicts. Rather than fostering reconciliation, says Odom, the strategy has, time and time again, “led to civil war, chaos and sometimes the disappearance of states.”

But U.S. forces are betting, with all of their chips, that this time will be different. The U.S. military hopes to prevent fueling a civil war by transitioning Concerned Citizens into permanent, paid positions with the Iraqi government Security Forces (ISF). Already, U.S. pressure has placed 1,600 former Concerned Citizens in the ISF, according to Air Force Col. Donald Bacon, chief of operational plans for the Multi-National Force in Iraq. And they are working to bring more into the fold.

However, the Iraqi government has been reluctant to hire senior officers from the academy’s ranks, and al-Maliki’s administration has shown little political will to add additional officers from the predominantly Sunni candidate pool. The 1,600 that have been hired (which represent less than 1 percent of ISF) have been integrated only because of intense U.S. pressure.

David Kilcullen, who just completed a tour as the top counterinsurgency adviser to the U.S. command in Iraq, warned in the online magazine Small Wars Journal that there is a threat of Concerned Citizens splintering Iraq.

“This will play out in ways that may be good or bad,” he wrote, but more than anything, the strategy is “fundamentally unpredictable.”

Kilcullen isn’t alone in his concern. At another bloggers’ roundtable on Nov. 2, Stanton said that, although he didn’t believe the Sunnis had the numbers to pose a real threat, if they “get discouraged at the continuous rebuff,” it could lead them to secede from Iraq or “pick up insurgency again.”

The possibility, he said, “haunts” him.

Jessica Pupovac is an In These Times contributing editor and a Chicago-based freelance reporter.