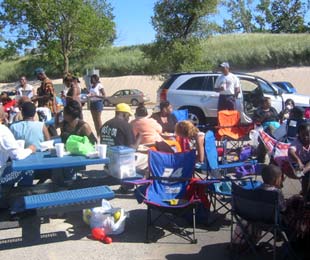 By most measures, the citizens of Benton Harbor, Mich., are not materially wealthy. The city’s residents are predominantly black–92 percent–and the median family income is $19,250, barely two-thirds of the minimum basic family budget, as calculated by the Economic Policy Institute.

One of the few sanctuaries for the city’s working-class residents is Jean Klock Park, a popular public beach that offers spectacular views of Lake Michigan. But if the city’s other large constituency, the home appliance manufacturer Whirlpool Corporation, gets its way, the park will be turned into a private golf course.

Whirlpool, its developer allies and their front group, known as the Cornerstone Alliance, have persuaded city commissioners to approve a plan to turn the park into three holes of a “Jack Nicklaus Signature Golf Course.” The City of Benton Harbor approved the “conversion” without meaningful citizen input last January. The golf course would be attached to Harbor Shores, a proposed $500 million development with 850 housing units, two hotels, four marinas, a water park and commercial and retail space.

Turning the public park private is essential, insists course designer and golf legend Jack Nicklaus. After visiting Benton Harbor last August to see the projected site, Nicklaus claimed that it would be impossible to attract golfers without the marvelous lake vistas afforded by the enclosure of the park. “If you took Pebble Beach’s ocean holes away,” Nicklaus explained, “it would be just another golf course. … To not use the lake or some of that area, you would lose 90 percent of your power to attract people.”

John Nellis and Carrie Klock would not be pleased. In 1917, they purchased and then deeded a pristine 90-acre parcel of Lake Michigan frontage property to the City of Benton Harbor. The terms of the deed required that the property be used exclusively and forever as a public park. The land was dedicated “for the children” and named in memory of the Klocks’ deceased daughter.

Benton Harbor residents have long used the park as a gathering place for family reunions, church picnics and baptisms. Many in the local black community see it as a place where residents of the city’s hard-pressed neighborhoods can get away and commune with nature. According to local resident Emma Kinnard, the park is “a beautiful gift that was given to us … [to] see the beauty of what God has created.”

The pro-development Midwest Real Estate News, on the other hand, referred to the park last July as “an underutilized Lake Michigan beachfront gem” that is “fairly isolated” and has “developed a reputation as a site for dogfights and drug deals.”

Besides killing a public space for the town’s residents, Whirlpool’s proposed golf course would be an ecological disaster that would destroy important dunes, habitats, marsh and wetlands. Marshes and wetlands, especially, play a vital role in filtering and purifying groundwater, containing erosion and preventing floods. The golf course would also pour a steady stream of noxious, nitrogen-intensive fertilizer run-off into local water supplies.

For more than a year, Benton Harbor activists and environmentalists have worked to convince Michigan’s Democratic Gov. Jennifer Granholm to intervene against Whirlpool. Despite her self-professed environmental credentials–she proclaimed April 20 “No Child Left Indoors Day”–so far, she has not. Instead, Granholm told activists last December that the proposed park “conversion” (privatization) is “a local matter” and therefore beyond her purview. At the same time, as the Detroit Free Press recently reported, “the state has offered funding and tax incentives worth more than $120 million to the developer, Harbor Shores.”

Desperate for jobs and revenue, Granholm has been selling the state’s soul to business interests. She has supported environmentally disastrous sulfide mining in the Upper Peninsula and, in central Michigan’s Mecosta County, she has repeatedly acted on behalf of Nestlé Corporation’s right to pump millions of gallons of spring water out of natural water basins.

As for Whirlpool, the corporation has rewarded the governor nicely with campaign contributions. During the 2006 election cycle, Granholm received approximately $10,000 from top Whirlpool executives, including $3,400 from CEO Jeff Fettig and $3,400 from retired Whirlpool CEO and current Harbor Shores Board President David Whitwam.

Whirlpool insists that its development is about helping the community and ending the intense local poverty. In June 2003, Benton Harbor’s economic desperation sparked major riots that brought unwelcome national attention to the city.

Harbor Shores and the Cornerstone Alliance claim that the golf course is about “urban renewal.” But the Whirlpool Corporation’s decision to move most of its manufacturing to southern states and overseas in the last third of the 20th century has contributed significantly to the economic misery.

From a peak of 2,400 jobs in Michigan in the late ’60s, Whirlpool’s manufacturing workforce has been slashed to 300. Few of the jobs projected to arise from Harbor Shores will go to Benton Harbor residents, and especially not to the city’s young black males. Local activists have discovered that turning Jean Klock Park into a golf course has been, in the words of Michigan Radio reporter Vincent Duffy, “the dream of Whirlpool executives and developers for more than a decade.”

That “dream” is currently on hold, thanks to an Oct. 16 decision by the National Park Service. The park received a past federal grant under the Land and Water Conservation Fund Act, that gives the National Park Service authority to approve or deny park conversion for non-public use. The federal agency determined that Benton Harbor did not make provisions for adequate replacement, or “mitigation,” land to make up for the appropriation of the park.

Although local activists and environmentalist allies are pleased with the decision, they say it’s too early to proclaim victory. Benton Harbor activist Carol Drake puts it this way: “Harbor Shores will stop at nothing to control Jean Klock Park.”

Granholm is lobbying the Park Service for a deal to let the golf enclosure go through. A Granholm spokesman recently told In These Times, the governor thinks there are “no insurmountable barriers” in Harbor Shores’ conversion proposal. And Benton Harbor’s Rep. Fred Upton (R-Mich.), who happens to be a direct descendant of Whirlpool’s founding family, has issued statements saying he will appeal the National Park Service decision.

“We are disheartened,” Drake says, “that the governor is working in the interests of Cornerstone Alliance and Harbor Shores but not the public and the children of Benton Harbor.”

Paul L. Street is the author of Racial Oppression in the Global Metropolis, a new book about institutional racism in and around Chicago and the nation.