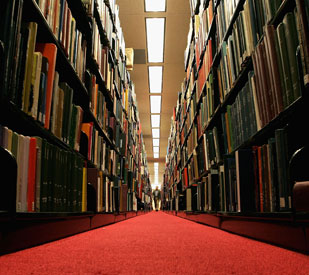 More and more, public libraries are being managed by private companies.

The trend of farming out public libraries to a private, profit-oriented business has raised concerns because libraries have long been considered democratic bodies built on the cornerstone of information diversity, transparency and intellectual freedom

In late October, Jackson County, Ore., re-opened the doors to 15 of its public libraries after a lack of funds had forced them shut on April 6–the largest library closure in U.S. history. However, as patrons returned to the bookshelves in the southern Oregon county, they learned that their libraries are now under private, for-profit management.

Companies like LSSI focus on counties that are desperate to keep their public agencies afloat but lack sufficient funds to do so. In the case of Jackson County, officials offered LSSI a five-year contract worth $3 million annually, with an additional $1.3 million reserved for building maintenance. The deal cuts in almost half what the county previously spent.

But the trend of farming out public libraries to a private, profit-oriented business has raised concerns. For one, private companies are not subject to the same oversight as are public institutions. More importantly, libraries have long been considered democratic bodies built on the cornerstone of information diversity, transparency and intellectual freedom.

“Libraries tend to reflect the communities they serve,” says Loriene Roy, president of the American Library Association (ALA). “[They] respond to community needs and they do so within their budget, but they are not set up to make profit. A company coming in that doesn’t exist within the community that is profit-making, you can see that there is a different attitude and there is concern about that.”

Under public management, transparency tends to be clear. As much as 80 percent of public library funding can come from local tax support, making libraries accountable to a board of trustees with representatives from the community.

While municipalities have for years contracted “non-library services,” such as janitorial duties or photocopying, the outsourcing of “core” library services–cataloging and use of automated systems and material acquisition–has increased.

This prompted the ALA to create an Outsourcing Task Force and conduct a study on privatization in 1999. Two years later, the ALA council adopted a stance opposing outsourcing, stating that libraries are “not a simple commodity” but “are an essential public good” that should be “directly accountable to the public they serve.”

LSSI makes its money from the difference between the budget and what it spends–or does not spend. It typically downsizes staff, centralizes accounting and human resource services, and buys books in bulk, all while passing down administrative costs–sometimes as high as 15 percent–to patrons as general handling fees. (The company does not disclose its earnings.)

“They operate entirely with our tax dollars but they have no transparency,” says Buck Eichler, president of the Service Employees International Union (SEIU) Local 503 in Jackson County, whose organization represented the public library employees. “They’re completely secretive about their books. We no longer know where our tax dollars are going.”

Although the total cost of running the libraries was cut, so, too, were library hours. Now, most libraries in Jackson County are open at half the normal operating times and are closed on Sundays, totaling only 24 hours a week, down from the 40-plus hours before the April shutdown. The exceptions are the libraries in Ashland and Talent, which will stay open for 40 hours and 36 hours a week, respectively, after local residents recently voted in favor of a levy on monthly utility surcharges in order to pay for the extra hours.

While counties still own the buildings and retain control of library policies, LSSI is in charge of hiring employees, which has caused mixed reactions.

“I don’t have any problems with it at all,” says Kim Wolfe, manager of the Medford branch. “I think it’s a personal decision for each individual. The community is thrilled to have the libraries opening again. They’re thanking us and they’re glad they can come in and use our services.”

SEIU’s Eichler, however, has said some workers have refused to go back to work under a private employer.

“We don’t want to sacrifice living wages at the expense of workers,” says Eichler.

LSSI brought back about 60 of the 88 people who were laid off, according to one library staffer. But now that they are no longer union employees, they’ve been subject to contractual changes in rights, benefits and disclosure information.

Although salaries are comparable to what they were before, employees in the Jackson County Libraries are now no longer part of Oregon’s pension system, which has been replaced with a 401(k) program. Medical benefits have also been cut, and salary levels have been “adjusted depending on market conditions,” says Anne Billeter, a former Jackson County library manager.

“I’m not saying that LSSI has a goal of union-busting, but it is certainly the net effect,” says Eichler.

Some areas have seen a backlash. In Bedford, Texas, after a community-wide petition campaign to oppose library outsourcing gathered 1,700 signatures in four days, city council members voted 4-3 to reject privatization in August. “If our library dies, this community dies,” said Mark Gimenez, a local resident who attended the board meeting.

But not every public library is celebrating victories. In Jackson-Madison County, Tenn., even after a community group lobbied against privatization, the Tennessee Court of Appeals ruled in April that the county board has a legal right to outsource.

Thomas Hennen Jr., director of the Waukesha County Federated Library System in Wisconsin, says, “It is the urgent duty of public librarians to put the ‘good’ back into the ‘public good’ of the public library movement.”