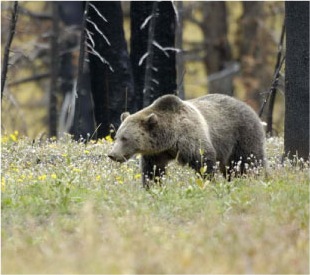 The Bush administration has removed the grizzly bears of Yellowstone National Park from the endangered species list.

Perhaps the greatest danger to endangered species is the Bush administration

The Bush administration is endangering our endangered species. As if climate change and habitat destruction weren’t enough, the very government offices tasked with protecting the nation’s wildlife have become predators.

Last week, the environmental organization Center for Biological Diversity filed lawsuits to defend six of the nation’s endangered species that have been put in additional peril because of action and inaction by the Department of Interior (DOI). The suits are the beginning of the Center’s national campaign to challenge the long-rooted and systematic political interference by high-level Bush administration officials to gut the Endangered Species Act and strip protections from 55 endangered species and 8.7 million acres of land.

The Center’s challenge comes in the wake of last May’s revelation that Julie MacDonald, deputy assistant secretary at the Department of the Interior and a Bush appointee, had reversed decisions to list several animals as endangered. A 2006 report by the Union of Concerned Scientists (UCS) found that MacDonald “personally reversed scientific findings, changed scientific conclusions to prevent endangered species from receiving protection, removed relevant information from a scientific document, and ordered the Fish and Wildlife Service (FWS) to adopt her edits.”

MacDonald resigned from her post after an embarrassing DOI Inspector General report documented her rampage through the nation’s wilderness. But feelings of relief from the axing of the government’s sacrificial lamb should only be temporary. Meddling with the science surrounding threatened and endangered species has become as commonplace in Washington as an industry lobbyist winking at a congressman.

As an act of penance, the DOI and the FWS said they would reevaluate eight instances in which MacDonald illegally reversed a threatened or endangered listing. But in a press release issued last week, the Center called this a “cynical effort at damage control,” saying that MacDonald had her hands in more than 100 cases of scientific interference.

“The depth of corruption within the Department of the Interior goes way beyond Julie MacDonald and eight decisions,” Michael Senatore, senior counsel for the Center, said in the press release. “It impacts hundreds of endangered species and millions of acres of wetlands and wildlife habitat.”

Indeed, in a letter announcing its intent to sue last August, the Center listed several other high-ranking officials in the White House Office of Budget and Management, the Department Interior, and the Fish and Wildlife Service who have overruled FWS scientists.

A 2007 report by the Center said the Bush administration has “implemented the Endangered Species Act in a manner that undermines, minimizes and eviscerates fundamental protections for the nation’s most imperiled wildlife.” Since the administration’s reign began in 2001, the FWS has listed a scant 50 species as threatened or endangered, compared to 512 species listed by the Clinton administration, and 234 listed during Bush senior’s one term.

The current administration’s reluctance to grant this protection isn’t because there aren’t animals that need it; 279 species are well qualified. And not only are many species still waiting for a spot in the safe house, others are getting kicked out. The administration has stripped, or is in the process of stripping, protections from the gray wolf, the Yellowstone population of grizzly bear, the Florida manatee, and the marbled murrelet.

It’s not only the science on wildlife that’s been fudged. The Bush administration has tampered with the science regarding such issues as public health, the environment, pollution and contamination, and national security. The interference is so extensive, the UCS published an “A - Z Guide to Political Interference in Science” on its website, and more than 12,000 U.S. scientists, including 52 Nobel Laureates, have signed a statement which denounces the administration’s meddling and rightfully demands that “the distortion of scientific knowledge for partisan political ends must cease if the public is to be properly informed about issues central to its well being, and the nation is to benefit fully from its heavy investment in scientific research and education.”