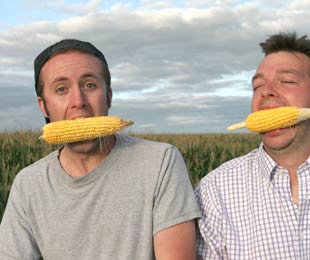 Ian Cheney (left) and Curt Ellis are corn-fed-up in Iowa.

King of the Crop

Two years ago the federal government spent $9.4 billion to promote corn production, driving small farmers off their lands in Mexico, because they were unable to compete with U.S. imports

Two buddies from Yale trek to northern Iowa, buy an acre of farmland, start growing corn and make a documentary about the experience. Sound like a trite tale of East Coasters playing Midwest farmers? It could be, if not for the filmmakers’ sincerity and their message in the new movie, King Corn.

Cheney and Ellis each had a great-grandfather who lived in the same rural town of Greene, Iowa, so the trip, in some ways, is also an exploration of their roots.

This connection to their heritage gives Ellis and Cheney some farm cred, and it helps better explain why their sympathies lie with the many small farmers who have been driven off their lands and out of their livelihoods by big agribusinesses like Cargill and Archer Daniels Midland. As one tired-looking area resident tells them, “A lot of farmsteads are disappearing.”

Not surprisingly, Ellis and Cheney gain inspiration from the work of Michael Pollan, the University of California, Berkeley journalism professor, whose Botany of Desire and The Omnivore’s Dilemma exposed a national audience to the strange realities of factory farming.

In 2005, the federal government spent $9.4 billion in taxpayer money to promote corn production. The resulting cheap overproduction has driven small farmers off their lands in countries such as Mexico, because they were unable to compete with U.S. imports. This oversupply helps explain why, in 2000, U.S. residents consumed an average of 73.5 pounds of high-fructose corn syrup (up from 0.6 pounds yearly in 1970).

Pollan, who is interviewed in King Corn, describes the prevalence of the crop in the fast-food industry. “If you take a McDonald’s meal, you don’t realize it when you eat it, but you’re eating corn. Beef has been corn-fed. Soda is corn. Even the french fries,” Pollan explains. “So when you’re at McDonald’s, you’re eating Iowa food. Everything on your plate is corn.”

The filmmakers don’t take themselves too seriously–demonstrating farm economics with toy models–nor do they patronize or pigeonhole their subjects, unlike, say, filmmaker Michael Moore.

When they visit nonagenarian Earl Butz, the secretary of agriculture under Nixon who institutionalized subsidies for big agribusiness, they are positively gentle. From an assisted-care facility, Butz describes the subsidy system he helped set up for corporate agriculture as creating an “age of plenty.”

The film avoids quick cutting and flashy visuals, letting the wind-swept beauty of the Farm Belt grow on the viewer through plenty of leisurely long shots.

Ellis and Cheney tend to their acre of corn according to the dictates of modern agricultural practice, dutifully applying ammonia fertilizers and pesticides. The process sacrifices nutritional value on the altar of maximum yield. And when the field is eventually brought to harvest, the two friends give it a taste test. It’s terrible.

That doesn’t matter, however, because most of their corn will wind up as fodder for American cows in overcrowded feedlots. Ellis and Cheney talk to a cattle rancher in Colorado who explains, “The mass production of corn drives the mass production of protein in confinement.”

It also produces sick and fatty cows that are slaughtered only shortly before they are about to die from feedlot-bred illnesses.

Though they are told it is impossible to follow their acre of genetically modified, pesticide-drenched corn once it is ground to pulp, Ellis and Cheney know that much of Iowa’s crop ends up as high-fructose corn syrup in New York City. So they head east and meet a Brooklyn cab driver who reels off health problems he and his family have suffered from their soda addiction–diabetes, obesity, early death from heart disease. The cabbie, himself a reformed soda addict, explains that after quitting the “candy water,” he lost more than 100 pounds.

King Corn couldn’t be more timely. The mammoth new Farm Bill is currently stalled in the U.S. Senate, partly because of debate over the nature of its subsidy program. The bill is up for renewal every five years or so, and in the past, has passed through Congress without much debate. But calls for reform this time around are unprecedented.

Ken Cook, president of the Environmental Working Group, recently told the Los Angeles Times, “Farm bills always favor the status quo when they’re rushed. This gives us some time to educate people.” Reformists’ changes to the current bill include increased funding for food stamps and for nutritious food distributed through government-funded school lunches. King Corn usefully complements these efforts to rein in giant agribusiness and to reevaluate Washington’s food policy.

But however you cut it, corn remains king.

Ben Terrall is a freelance writer based in San Francisco.