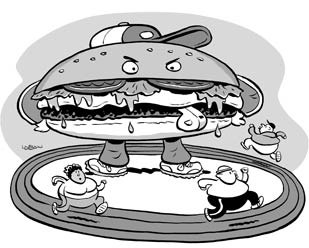 For three days early this fall, the Pennsylvania Convention Center was home to corporate entities such as PepsiCo, Hershey’s, Taco Bell, Crisco and McDonald’s. They weren’t there to count calories but to rub bellies with members of the American Dietetic Association, who had gathered in Philadelphia for the annual Food & Nutrition Conference & Expo.

PepsiCo cares about you. The company’s “Health and Wellness” website pictures a smiling family in tennis shoes and workout clothes enjoying a brisk walk. All are consuming Pepsi products. Dad is drinking a can of Pepsi. Grandma is toting a bag of Lay’s potato chips. Aside from the questionable workout, we’re left to wonder: When did Pepsi become an advocate for health?

Marsha Holmberg, a food editor at the Oregonian who flew in from Portland, says too many Americans have become culinary illiterates, convinced by television commercials that processed food is nutritious. “Nobody thinks they have the time to cook,” Holmberg says. “They think it’s complicated. In reality, it takes as much time to make from a mix as it does to make from scratch. It’s an illusion that food preparation takes time.”

At the convention’s bookstore, neat rows of dietitian guidebooks–with covers of colorful fruit and vegetables, alongside the occasional whole grain cereal or wheat stalk–lined the booths. The message was healthy food, which professionals agree is the backbone of a sound diet.

Yet not everyone was eating from the same menu.

Registered dietitian Regena Gerth was promoting Taco Bell’s new “Fresco Style” line–which substitutes cheese with “fresh Fiesta Salsa.” “Patrons will continue to go to fast-food restaurants,” she says, “so the least we can do is offer healthy options–anything that can be incorporated into a diet.” She failed to mention that gut-busting Tex-Mex food filled with meat and beans is still the drive-thru favorite.

At the Unilever stand, the company marketed its Hellmann’s mayonnaise, demonstrating how to turn it into a meal in 10 minutes. Nearby, McDonald’s fried up public relations (millions served)– trying to recover from the heartburn wrought by Super Size Me, the 2004 documentary about the perils of eating at Mickey D’s.

Asked if it was ironic that McDonald’s was at the Food & Nutrition Conference & Expo, registered dietitian Julia Braun said not at all. “We’re not trying to be a health restaurant, but we still want to offer healthy options,” she said, admitting that this was an image campaign.

Frankenfood purveyor Monsanto, was also in attendance, the company’s public relations team extolling the virtues of technical engineering on a massive scale. Would it not be safer and more environmentally sound for consumers to rely on local food sources, especially given the E.coli fallout from mass-produced foods such as spinach and beef? (Not to mention the pollution emitted by transporting produce across a continent?)

By and large, the Chicago-based American Dietetic Association (ADA) and a majority of its 67,000 members–what the association refers to as “the nation’s food and nutrition experts”–have failed to embrace the local food movement, much less sound the alarm over our culture’s unsustainable reliance on mass-produced food: the pollution caused by trucking corn, fruit and meat across multiple state lines, and shipping it across the world; the environmental destruction wrought by farmers pressured into a monoculture agriculture system; and the inherent health risk of eating a bunch of spinach from an unknown source.

The valuable local food lessons of Michael Pollan’s The Omnivore’s Dilemma seem not to have registered at the ADA–or, at least, not enough to have supplanted its need to court corporate sponsors for its annual conference.

In its promotional material, the corporation features three different characters: Committed Connie who is white, Committed Carmen who is Latina and Committed Cassandra who is African American. At a media presentation in Philadelphia, a GSK spokesperson was careful to add that, when it comes to the African-American community, Alli’s marketing focuses on “health” rather than “weight.” She explained, they find size “a little more attractive.” Yet, at the same presentation, the GSK spokesperson stressed that Alli only works if a person sticks to a low-calorie, healthy diet.

Why, then, was a diet pill promoted at the ADA’s annual keynote event when the most important factor in maintaining a healthy lifestyle is to eat right (the ADA’s website, after all, is www.eatright.org)? And how did “the nation’s food and nutrition experts” stray from promoting the fruits, vegetables and whole grains featured on the covers of their books? Could it be related to the more than $10,000 that GSK contributed to ADA as a corporate sponsor within the last year? ADA’s other corporate sponsors include Unilever, National Dairy Council, PepsiCo, Kellogg’s, General Mills, Mars Inc. and Abbott Nutrition. According to ADA President Connie Diekman, “the ADA closely evaluates any potential collaboration or partnership to ensure it directly supports ADA’s mission and strategic direction, protects ADA’s name and safeguards the integrity and credibility of ADA and our members.”

Hunger and Environmental Nutrition (HEN), a group of dietitians who are concerned about public health within the ADA that has more than 900 members, focuses on nutritious foods and clean water in the context of a secure and sustainable environment. One evening during the conference, HEN held a “Food and Film Feastival” in Philadelphia’s historic Reading Terminal Market where it served locally grown, seasonal foods, as well as micro-brewed beer, while showing guests films about food and the struggles today’s farmers face to stay in business.

Helen Costello, the past chair of HEN, said she felt stuck between a rock and a hard place in the debate over local and organic foods. “This is an issue of food safety, when 22 million pounds of beef are recalled as a symptom of a consolidated food industry. One affected animal ruins the whole lot. But it’s complicated because our culture wants cheap food.

“More ADA members would like more local food,” she said, “but the organization takes a conservative view overall, adopting the mindset that organics can’t feed the world.”

HEN chair and executive director of the Sustainable Farming Association of Minnesota, Mary Jo Forbord said that convincing the ADA to promote local food systems over corporate agribusiness is more of a marathon than a sprint. Forbord, a fifth-generation Minnesota farmer, said that currently, “There’s no public discourse. Consumers and citizens ought to write the Farm Bill, because we all pay for the system we have in place. It determines what we will eat, how our landscapes will be used, and who will reap the benefits. Agricultural policy needs to line up with food policy, with goal of health in the broad sense–for people, communities and ecosystems.”

For the time being, though, HEN will take baby steps like holding local-food festivals in lieu of launching an all-out, food-throwing mutiny against the ADA. Eventually, HEN hopes, ag-biotech, big pharma and fast-food representatives dressed in dietitians’ clothing will have no place at the table.