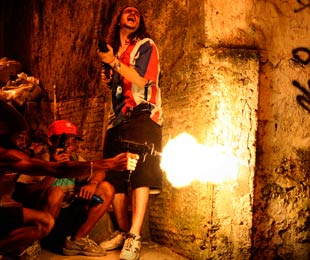 A scene from the Brazilian film Tropa de Elite.

The film mirrors the emotional and political reflex--as common in the United States as it is in Brazil--that police should be strong, and bleeding hearts should stay out of the way.

Does every Brazilian love a fascist? That’s the question raised by the new film Tropa de Elite, which is on its way to becoming one of the country’s most popular movies of all time. The protagonist in Tropa de Elite, or “elite squad,” is a cop who kills for revenge, executes corrupt cops and tortures suspects–including children–for information. And the film’s phenomenal success is frightening.

In a country where frustration about street crime and the police’s inability to stop it run deep, director and co-writer José Padilha has created a new national superhero: the black-clad, above-the-law ubercop. But this may be a case where the creation has turned against its creator.

Padilha opposes torture,is an outspoken progressive and favors decriminalization. In 2002, he directed Bus 174, a documentary about a young, impoverished man who took a bus full of passengers hostage in Rio de Janeiro and ended up violently killed by police.

BOPE, we’re told, exists because the city’s drug gangs and police are at war, and conventional police are too corrupt, out-gunned and ill-trained to fight it. Nascimento’s team invades gang-controlled favelas (shanty towns) in silence. They shoot first and interrogate later. The image of a bloodied face struggling to breathe under a plastic bag becomes mundane in the film’s two hours.

Weeks before its official Oct. 12 release, Tropa de Elite had already become a blockbuster. A workprint was leaked from a subtitling shop preparing the English version, hitting the Internet and, more significantly, Brazil’s vast network of street DVD sellers (camelos), who sold it under the slogan “get it now before the police ban it.” (A group of BOPE officers had asked a judge to block commercialization of the film, on the grounds that it “attacks the corporation [the military police] and violates the honor, dignity and even the physical integrity of police officers.”)

An estimated 11 million Brazilians watched the movie on DVD, and more than 2 million saw it in theaters, according to the polling and ratings organization Ibope. In São Paolo, a survey by the daily Folha de São Paolo found that 19 percent of city residents over age 16 had seen the film.

I watched a burned copy at my home in Belem, Brazil one Sunday morning with a politically aware musician and a media activist. They loved it. In fact, they saw its gruesome violence as a searing indictment of the real methods of Brazilian police, and as a necessary articulation of the grim reality of the favelas.

Later that day, however, I serendipitously ended up at a family barbecue, drinking beer and eating grilled meat with several military police officers. When Tropa de Elite was mentioned, the eyes of these burly men lit up and suddenly it was like listening to geeks talk about Star Wars. Most had seen it more than once, some a ridiculous number of times. One said it was the best movie he had ever seen.

If the filmmakers had purposely set out to weave Rio violence into a fascist propaganda piece, it’s impossible to imagine them doing a better job.

In the movie, torture works and threats of brutality are effective (such as when police threaten to rape a teenage boy with a broomstick). A group of privileged student activists are some of the film’s least likable figures. Women are portrayed as naïve, and the men are shown as only wanting to get laid or deal drugs. We even see a cop walk into a peace march and punch a pacifist in the face. (The “pacifist” is actually a drug dealer who got a cop killed.) The viewer’s personal identification with police protagonists–and against everybody else–is clear and unbroken.

Tropa de Elite was filmed in five favelas, which lends it an unsettling realism. Like participants in the infamous Stanford Prison Experiment, the actors seem to absorb their roles from their uniforms and surroundings. On the interview program “Roda Viva,” Padilha said that many onlookers assumed they were watching the making of a documentary, and that actual, on-duty BOPE officers (who were often nearby) once interrupted the filming of a torture scene to tell actors they were holding the plastic bag wrong. Lines between police mythology and reality blur, and the film asserts itself as incontrovertible.

When asked if a solution exists to the violence, Padilha has been circumspect: “A solution can happen through sustained economic growth, with good distribution of income, through investment in education and improvements in the judicial system,” he said. “It will also happen through better salaries, training and education of police.”

At times Padilha may seem to be bobbing and weaving, but he’s no fascist. He says that conditions in Brazil’s prisons amount to torture. When defending the film, Padilha has said it holds a mirror up to society.

“After I made Bus 174, there was a series of films about urban violence focused on the marginalized, and not one that spoke to the police’s point of view,” he said in an interview with Brazilian news site UOL. “In American cinema, there are many focused on the police. So I decided to make a film about this point of view.”

But BOPE’s contempt for conventional law is far more distilled than that shown in Hollywood police films, and the torture portrayed here doesn’t even enjoy the philosophical ambiguity of the “ticking time-bomb” scenarios routinely offered on the television show “24.”

Yet Tropa de Elite mirrors the same emotional and political reflex–as common in the United States as it is in Brazil–that police should be strong, criminals should be shot and bleeding hearts should stay out of the way.

Where I live, in Belem,about 1,800 miles from Rio’s favelas, songs from Tropa de Elite’s soundtrack have entered heavy rotation in our neighbors’ playlist–including “Rap das Armas,” a bailé funk paean to guns. It’s a poor neighborhood, and these same neighbors have been roughed up by police for information in ways that approach torture. I know because the sounds filled my house.

Likewise, unlicensed BOPE dolls were for sale in the same Rio neighborhoods that the real BOPE officers shoot their way through. Kids have reenacted torture scenes and uploaded them to YouTube, where police subsequently took them down because they claimed the videos would incite violence. And when variety show host Luciano Huck was held up at gunpoint for his Rolex watch, he wrote an op-ed for Folha de São Paolo titled “Call Captain Nascimento!”

Though numerous critics have decried its politics, the film’s explosive popularity overshadowed them. The conservative weekly Veja declared on its cover: “Tropa de Elite is the biggest success of Brazilian cinema because it treats bandits as bandits and shows drug users as the partners of traffickers.” This declaration was published alongside a photo of a masked BOPE officer brandishing a machine gun.

The film may raise important issues,but its popularization of a right-wing perspective seems likely to make things worse. Tropa de Elite took a fictional officer’s struggle and has ended up documenting, articulating and fortifying, however inadvertently, a dangerous fascist myth.