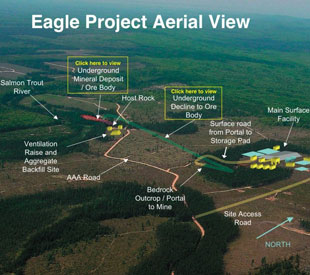 The wild and picturesque Salmon Trout River in Michigan’s Upper Peninsula is home to the last breeding coaster brook trout on the south shore of Lake Superior. This native fish is awaiting classification to endangered species status by the Department of Fish and Wildlife.

But the Upper Peninsula has also coexisted with the copper and iron mining industries since the late 1800s. And its newest mining suitor, Kennecott Minerals Corporation, wants to build sulfide–or “acid mines”–that could irrevocably harm the local environment and the surrounding Great Lakes ecosystems.

Kennecott, a Utah-based subsidiary of multinational Rio Tinto, has become a Michigan land baron. Since 1994, the corporation has acquired more than 500,000 acres and leased 26 percent of all mineral rights alone in Marquette County, which is in the northern Upper Peninsula.

The company plans to develop a nickel sulfide mine–known as the Eagle Project–beneath the Salmon Trout River. These mines are referred to as “acid mines” because they produce sulfuric acid (battery acid) and release heavy metals–including arsenic, mercury and lead–into watersheds, destroying all life. There has never been a non-polluting sulfide mine near a watershed, according to the late Roscoe Churchill, a longtime Wisconsin anti-mining activist and author.

On its website, Kennecott claims the Eagle Project would have a “relatively small footprint” that would have “less impact to the environment and community.”

Since 2004, Kennecott has successfully lobbied members of Democratic Gov. Jennifer Granholm’s administration and lawmakers from eight Upper Peninsula districts–initially to pass new sulfide mining laws, and currently to approve an 8,000-page mining permit application–according to a recent investigation by the Great Lakes Bulletin, a quarterly publication from the Michigan Land Use Institute.

In 1994, John Engler, Michigan’s Republican governor, was at the helm when Kennecott leased the Escanaba River State Forest, where half of the ore body is located. During his tenure, Engler weakened Michigan’s Department of Natural Resources (DNR) and created a “puppet” agency called the Department of Environmental Quality (DEQ), which put industry on a self-regulating honor system.

In 2003, just after Engler’s departure, the public got wind that Kennecott had discovered a rich ore body. But at the time, Michigan had no underground mining laws, despite its long history of iron oxide mining. The DEQ initiated a fast-track process to grant Kennecott a mining permit and, in 2004, invited a group of Michigan business interests–including Kennecott Minerals Project Manager Jon Cherry–and local environmental groups to a “Mining Work Group.”

At the first meeting, the DEQ announced that there would be no discussion about a “Wisconsin moratorium”-type mining law–a defeat for mining opponents. In 1997, voters in neighboring Wisconsin, facing parent company Rio Tinto’s attempt to build a sulfide mine, had inserted a stipulation into their new mining laws requiring mining applicants to provide an example of a sulfide mine that, in 10 years, operated and closed without polluting the area’s water. No mining company has entered Wisconsin since.

But the DEQ allowed Kennecott to do its own testing for the permit, despite 3,000 signatures from citizens requesting that the U.S. Geological Survey do it instead. The agency is considered the expert in hydrology testing. The DEQ also hired the HCItasca Consulting Group to review Kennecott data, even though Itasca’s client list includes Rio Tinto.

Over the course of this four-year battle, they have fought not only a corporate “green-wash campaign” by Kennecott, but also a DEQ agency that has been lax on looking at critical scientific data concerning the dangers of sulfide mining.

Mining opponents have provided more than 10,000 signatures to Granholm requesting a denial of Kennecott’s permit, and 117 local doctors have also signed a request for denial. Yet the DEQ has granted Kennecott preliminary approval with a final announcement due sometime this winter. Counter-lawsuits could follow.