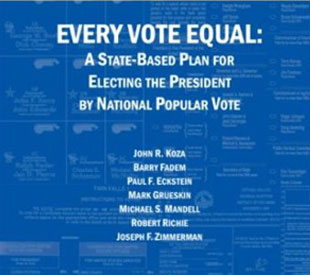 Dropping Out of Electoral College

Maryland is the first state to pass the National Popular Vote (NPV) into law, and several others are right behind

A Stanford University computer scientist named John Koza has formulated a compelling and pragmatic alternative to the Electoral College. It’s called National Popular Vote (NPV), and has been hailed as “ingenious” by two New York Times editorials. In April, Maryland became the first state to pass it into law. And several other states, including Illinois and New Jersey, are likely to follow suit.

How NPV works is this: Instead of a state awarding its electors to the top vote-getter in that state’s winner-take-all presidential election, the state would give its electoral votes to the winner of the national popular vote. This would be perfectly legal because the U.S. Constitution grants states the right to determine how to cast their electoral votes, so no congressional or federal approval would be required. NPV could go into effect nationwide as soon as enough states pass it (enough states to tally 270 electoral votes–the magic number needed to elect a president). In 2008, NPV bills are expected to be introduced in all 50 states.

“We’ll have it by 2012,” says Robert Richie, executive director of the reform group Fair Vote.

NPV is an agreement between the states to honor the wishes of a plurality of American voters. (Koza came up with the idea from his experience working on lotteries, where state compacts are common.)

In the last 20 years, partisan trends have made presidential elections a series of separate contests in a shrinking number of competitive states. Republican and Democratic candidates alike consider two-thirds of the states to be “spectator states.” They often ignore voter registration efforts and spend considerably less money in those states–if they visit them at all.

In 2004, candidates spent 99 percent of campaign funding in only 16 states, leaving the rest of the country without a political voice. Highly populated states like New York and California, and states in much of the South, are considered “safe” and therefore offer little incentive for candidates to pay attention to their residents.

Currently, 70 percent of white voters and 80 percent of non-white voters live in spectator states. In the ’70s, three in four black voters lived in swing states where their population total was larger than the margin of difference in elections. But today, only 17 percent of black voters are in that position. Not surprisingly, presidential candidates pay less attention to issues that concern many African Americans.

According to its advocates, NPV promises basic fairness. For example, as electoral rules stand now, the loser of the national popular vote can still be elected president, as happened in 2000. Under NPV, all votes in the country would count the same. NPV would, in Richie’s view, “awaken people’s belief in the possibility of change” and prove that fundamentally unfair structures can be reformed.

Over the years, according to Koza and Richie, 65 to 70 percent of U.S. voters have supported direct election of the president. The declining number of battleground states now gives many states an incentive to sign on.

Illinois is the quintessential example of the flaws in the current system. As a safe state for Democrats, both major party candidates ignore it. There is little motivation to campaign there since the winner in Illinois gets only 21 electoral votes and the loser gets nothing. As a result, Illinois voters play virtually no role in shaping the issues of the election.

Illinois stands to become the second state to pass an NPV law. Last spring, the state house and senate passed bills that are currently being resolved and will head to the desk of Gov. Rod Blagojevich, who as a member of Congress supported efforts to reform the Electoral College.

According to advocates, New Jersey also appears likely to pass the law this year.

Koza, who originated the plan for NPV, also chairs National Popular Vote Inc., the coalition leading the national campaign. He predicts the 2008 presidential election will be a turning point in the rise of NPV.

Martha Biondi is a professor of African American Studies at Northwestern University and author, most recently, of The Black Revolution on Campus.