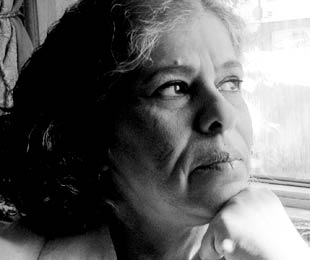 When I met Haifa Zangana in Naperville, ILL., 30 miles southwest of Chicago, the former political prisoner under Saddam Hussen’s Baath regime was working on a column but was having computer problems. The interview appeared to be a needed distraction. Zangana, who writes regularly for the Guardian, al-Quds, Red Pepper and al-Ahram Weekly, is also a novelist and feminist. She was in Chicago promoting her new book, City of Widows: An Iraqi Woman’s Account of War and Resistance (Seven Stories Press, 2007), and visiting her brother-in-law in the suburbs before heading off to more speaking engagements, including one with CODEPINK in Washington, D.C. on Nov. 25.

It was difficult to imagine that the petite, 57-year-old with smiling eyes once smuggled intelligence and weapons under her abaya to help subvert Iraq’s powerful political parties.

In 1972, when Zangana was 21, Baath officials arrested her and others for being part of a faction of the Iraqi Communist Party called the Central Leadership. She was held for six months as a terrorist and was tortured. After her release, Zangana eventually fled to London, where she has lived in exile with her husband ever since.

You write that you’ve been back to Iraq. How often do you go?

Not as often as I would like. I have my immediate family there, and my husband’s [family] too. But there have been cases where people are kidnapped immediately upon stepping into the Iraqi airport. Each political party has its own militias. The airport is under the control of one militia. So it’s getting more and more difficult, if not impossible.

They are carrying on, like my husband’s family who lives in a part of Baghdad that the Americans built a wall around.

This is the justification for it: “We are protecting people from the IEDs [improvised explosive devices] and we don’t want them to be randomly killed.” But at the same time there are air strikes that kill people randomly, so the justification doesn’t make sense except to separate and segregate people into smaller and smaller communities, which will make it easier for the occupiers to control them.

We are talking about Baghdad. There are also cities like Fallujah, Anbar and Samarra in the north, where walls are built to stop the coming and going of the people.

And it is not just the walls. The U.S. military was digging trenches around Al Hilla, the ancient city of Babylon, destroying an archaeological site to fill sandbags.

American archaeologists did fantastic work highlighting this issue. The problem was that once they left, the damage had already been done.

You were imprisoned by the Baath regime when you were 21. Tell me about it.

I was part of a political group that was a faction of the Communist Party. We were a group of young people who didn’t want to be working within the party because it was following the agenda of the Soviet Union. We wanted to combine democracy and socialism and social justice. More like the Latin American left movement.

We were fought by both the mainstream Communist Party and the Baath regime. We were a thorn in their side so we were arrested. Some of us managed to escape, others were arrested. I was one of them.

I was with a group of four people. Three of them were hanged. I was saved because my mother and family were adamant that I was there as a political prisoner. And because we had a relative who was a bodyguard for Saddam Hussein. The irony is that my relative was arrested later in the ’90s and died while under house arrest.

After my imprisonment, I spent over a year in Iraq. But my family thought I would be arrested again so my father arranged for a passport and I got out.

Talk about your detention.

The first couple of weeks I was in the detention center called Qasir al-Nihaya. I was kept next to the torture room where you can hear 24 hours of nonstop screams of people tortured. It was horrendous.

You don’t know when they’ll come for you, so you sit and wait. You sit and think you hear footsteps. You try to decipher the sounds. Who is going to open the door? Why are they opening it? Where are they taking you?

I was beaten up. I was pushed around. I was stripped naked. I had to face the other people who were arrested, but because they were tortured, I couldn’t even recognize them except for their voices. They were able to say a few words. They were made into a complete mess.

When you hear allegations or stories of torture, what goes through your mind?

It’s very sad. I am also outraged because we fought these practices for many decades and we thought we would end them.

But here we are with troops, with military occupation, with economic occupation and the cultural occupation. They try to erase our memory, our history, our archaeological sites and kill our civilians.

In four and a half years, we have lost 1 million Iraqis. And that’s terminated, physically. We’re not talking about the consequences of conventional weapons, the depleted uranium, the phosphorous, the cluster bombs.

As for detentions, the International Red Cross has recorded up to 60,000. And those are security detainees.