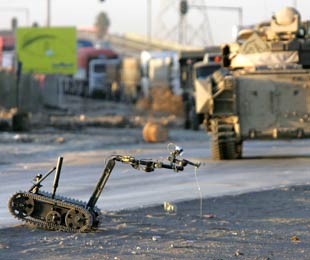 A remote-controlled bomb-defusing robot carries back the blasting cap of a roadside bomb to clear it from a Baghdad street.

In the next five years, according to DefenseLink, the Pentagon plans to spend $2 billion on robots, breaking the monopoly of human soldiers in an army

Improvised explosive devices, or IEDs, have killed 1,678 U.S. military personnel in Iraq and Afghanistan since July 2003, according to Georgia-based Iraq Coalition Casualty Count. The death toll could have been much higher without the help of 5,000 IED-detecting robots that, according to CBS News, have found 10,000 roadside bombs in Afghanistan and Iraq. But the next step in the evolution of wartime robots looks to go from saving lives to taking them.

The U.S. Army soon plans to deploy armed robots with firepower into the wars in Iraq and Afghanistan. Designed by Foster-Miller, these robots, known as SWORDS (Special Weapons Observation Reconnaissance Detections Systems), are operated and fired by remote control. They can be outfitted with M240 or M249 machine guns or Barrett .50 caliber rifles.

The 5th Special Forces in Iraq evaluated the system, and three other systems have completed evaluation with the 3rd Infantry Division and deployed to Iraq in 2007. Meanwhile, the Army continues to assess alternative weapons, including grenade launchers and anti-tank rocket launchers. Each unarmed version of the robot costs $60,000.

SWORDS first received major media attention in 2005, when the Associated Press reported, “Military officials like to compare the roughly three-foot-high robots favorably to human soldiers: They don’t need to be trained, fed or clothed. They can be boxed up and warehoused between wars. They never complain. And there are no letters to write home if they meet their demise in battle.”

In addition to Foster-Miller, iRobot, founded in 1990 by MIT roboticists, is one of several robotic companies contracting with the military–though it may be most well known for its Roomba, the popular robotic, home vacuum cleaner. On Oct. 21, 2007, CBS reported that iRobot’s Warrior is expected in Iraq by 2009. The Warrior “is a serious robot,” said Joe Dyer, iRobot’s president of Government & Industrial Robots Division. “This is a 250-pound robot that will be able to run a four-minute mile.” Depending on the intensity of the mission, the Warrior could last up to 16 hours.

Warrior, like SWORDS, is currently being designed to have human operators, but engineers are simultaneously testing the ability of robots to “think” for themselves. This “disruptive technology,” Dyer said, is “going to change the way we fight, the way we live–it’s going to change our entire lives.”

Max Boot, senior fellow for National Security Studies at the Council on Foreign Relations, agrees. “These are periods of momentous change when new technologies combine with new doctrines and new forms of organization to transform not only the face of battle but also the nature of the state and of the international system,” he says.

Boot, author of War Made New: Technology, Warfare, and the Course of History, notes that the U.S. budget for research and development for military technology alone–$71 billion in 2006–is more than any other country spends on its entire defense. And it’s only a fraction of the annual U.S. military budget, which is now at $500 billion–almost as much as the rest of the world combined.

In the next five years, according to DefenseLink, the Pentagon plans to spend $2 billion on robots. As Jim Braden, project manager of the Army’s Joint Robotics Program, told CBS, “It’s a tremendous capability to put a robot where you do not want to put a man.”

But it also raises serious concerns about the likelihood for increased military aggression when the potential for deaths for U.S. soldiers is eliminated or decreased in the equation of war. The problem, according to Peter W. Singer, a senior fellow at the Brookings Institution and author of the forthcoming book, Wired for War, is that “we have an assumption of who fights wars that is increasingly outdated. While our understanding of war … assume[s] that combatants are only soldiers serving on behalf of states, the reality of war today is that combatants range from soldiers to terrorists to warlords to contractors, and now to unmanned systems.”

Allen McDuffee writes about politics and policy. He blogs and hosts a podcast at governmentality and is currently working on a book about the influence of think tanks in Washington.