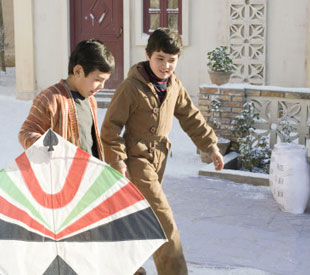 Paramount, the studio producing The Kite Runner, turned to retired CIA agent John Kiriakou to see if the movie's child stars (Zekeria Ebrahimi and Ahmad Khan Mahmidzada) could be in danger because of the film's controversial themes.

Kiriakou and the Kite Runner

The CIA agent who just admitted to waterboarding a high-ranking al Qaeda operative has had an interesting retirement.

John Kiriakou, the CIA agent who led the team that waterboarded a high-ranking member of Al Qaeda in 2002, served as the security consultant for Paramount’s soon-to-be released film, The Kite Runner. Lobbyists for Viacom arranged for Kiriakou to serve as a security consultant after concerns arose about the safety of the movie’s child stars, Zekeria Ebrahimi, Ahmad Khan Mahmidzada and Ali Danish Bakhty Ari.

Based in Pakistan from 1998 to 2004, Kiriakou led the team that captured Abu Zubaydah, the first high-ranking member of Al Qaeda to be captured after 9/11. On Monday, Kiriakou, now retired from the CIA, became the first person to admit publicly his involvement with the agency’s coercive interrogation program for suspected terrorists. He told ABC News that although he thinks waterboarding Zubaydah “probably saved lives,” he is now convinced the technique is a form of torture and that “Americans are better than that.”

After retiring from the CIA in 2004, Kiriakou returned to Washington D.C. to pursue a career as a private security consultant. He became involved with The Kite Runner in July 2007. Lobbyists for Viacom helped retain Kiriakou and also enlisted Rick Klein, a Middle East Specialist at Kissinger McLarty Associates, an international strategic consulting firm. The “Kissinger” and “McLarty” are none other than Henry Kissinger and Bill Clinton’s former chief of staff Mack McLarty.

A Paramount spokesman told In These Times that Paramount executives had no further comment on how security consultants were chosen for The Kite Runner.

In July, the filming of The Kite Runner was completed, and the picture was scheduled to premiere in November. During the interim, ethnic violence rose substantially in Afghanistan. Though the film was shot in China and San Francisco, instead of Afghanistan, the producers wanted to know if the movie would put the actors in danger.

The Kite Runner, based on the best-selling novel by Khaled Hosseini, is the story of two boys, Amir and Hassan, growing up in Afghanistan. Amir is the pampered son of a local Pashtun bigshot and Hassan is a Hazara houseboy. In one pivotal sequence, Hassan is raped by another boy in an alley and Amir fails to intervene. The movie touches on issues of ethnicity, religion and history that are highly controversial in Afghanistan.

The fact that the rapist is Pashtun and his victim is Hazara only adds to the potential for controversy. The Hazara are an ethnic and religious minority in Afghanistan. The Kite Runner explores the longstanding discrimination against the Hazara by the Pashtun elite.

To assess the security situation, Kiriakou conducted multiple interviews in Afghanistan and the United States. In Afghanistan, he looked up some of his old contacts from his days in the CIA. He also spoke to political leaders, NGOs, and tribal leaders. Kiriakou also encouraged intellectuals and TV commentators to talk about the book in the Afghanistan media.

Nearly everyone Kiriakou interviewed believed that the release of the movie would jeopardize the safety of the actors. Most of his sources also feared that outrage over the film could spark widespread violence. The general consensus was that that many Hazara would be humiliated and outraged to see a Hazara child depicted as the rape victim of a Pashtun.

Kiriakou’s sources were very concerned that the rape scene, and a second scene in which a Hazara child is forced to do a homoerotic dance, could generate reprisals against the actors and their families. Rape and homosexuality carry a tremendous cultural stigma in Afghanistan. Kiriakou was told that the boys might be attacked by their own tribesmen for shaming their clan.

“They were totally destroying these kids’ lives over there,” Ishaq Shahryar, former Afghanistan ambassador to the United States, told NPR’s Kim Masters.

Some experts worried that the Taliban would use the film as a pretext to stir up ethnic conflicts between Pashtuns and Hazara.

In light of Kiriakou’s briefing, the producers decided to delay the release of the movie for six weeks in order to get the boys and their families out of the country. Richard Klein of KMA flew to the United Arab Emirates to arrange passage for the boys. The boys and their guardians arrived in the UAE in early December. Nobody knows how long it will be before they can return home to Kabul.

If you live in Afghanistan, The Kite Runner will not be coming soon to a theater near you–because the Taliban destroyed all public theaters years ago. However, the bootleg DVD trade is thriving in Afghanistan, and DVDs of the film are expected to hit the streets shortly after the theatrical release.

The Kite Runner opens in select American cities on December 14.