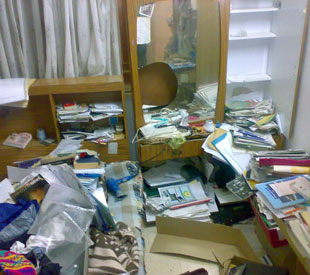 The living room of Mohammad Sawalha, after a Dec. 4 visit by the Israel Security Agency.

Why Is Yazan Sawalha in Prison?

Israel has detained the son of a prominent Palestinian peace activist, and refuses to say why.

Yazan Sawalha turned 20 years old on Monday in an Israeli detention center. His family had been hopeful that after 40 days under interrogation by the Israel Security Agency, Yazan would be home to celebrate his birthday.

“All the family is sad today,” said Mohammad, Yazan’s father. “Normally we have five plates around the table. Today is the first birthday since Yazan was born that he hasn’t been with us.”

Mohammad, a prominent Palestinian peace activist and founder of the Palestinian House of Friendship, spoke from Nablus with In These Times on Monday evening. He told his son’s story with an urgency and passion that belied his weariness. Powerless to stop his son’s arrest, he is using all of his energy to bring him home.

It was deep in the middle of the night on November 8 when Israeli soldiers “crashed their way” into Mohammad’s house. The masked soldiers searched the house before taking Yazan away in his pajamas. They said nothing about who they were, where they were taking Yazan, or why.

“The most harmful part of it was he was taken from the house without any legal statement shown to us that they have the right to come and to search the house,” Mohammad said. “The soldiers who took him were masked; we didn’t see their faces, which added to ambiguity and to our fear as a family about where he was. Where was he taken and by whom? Where is our son? Where is Yazan?”

Mohammad immediately appealed to two organizations for help: the human rights group HaMoked, comprised of Palestinian and Israeli staff, and the International Committee of the Red Cross (ICRC). He was finally able to determine that Yazan was being detained at Kishon/Jalameh interrogation center in Haifa. A week later, he was transferred to Moscobiya prison in Jerusalem.

Andrea Konig, media relations staff member at ICRC-Jerusalem, told In These Times via e-mail that “the ICRC office in Nablus has been approached by Mr. Sawalha’s father [and] news about his detained son was transmitted to him.” Konig said any further information about Yazan’s case was confidential and could not be shared.

For the first 27 days of his detention, Yazan was denied access to a lawyer and the ICRC. When the ICRC was eventually able to meet with Yazan, they relayed that he appeared in good physical condition. Still, Mohammad is plagued with worry that Yazan is being mistreated. During the visit with the ICRC, Yazan had been surprised to learn the date and time.

“When [the ICRC official] mentioned that to me, it made me really cry as a father because I understood that he must have been in isolation without being in touch with the outside world,” Mohammad says.

Mohammad saw his son for the first time since his arrest last week during a hearing that extended Yazan’s detention for another six days. They were not allowed to speak.

Mohammad says his family is still unsure what the Israeli government wants with a second-year economics student at An-Najah University. Yazan has not been formally charged. A November NPR story reported that Israeli security officials said Yazan was involved in “serious terror activity,” but would not give details.

Yazan isn’t the only Palestinian prisoner who has been denied access to a lawyer and kept in isolation. This type of treatment, and worse, is a “phenomenon” in Israel and the Occupied Territories, said Mohammad. It’s also breach of international law.

Israel is a signatory to international laws that absolutely prohibit torture and cruel, inhuman, or degrading treatment, including the International Covenant on Civil and Political Rights and the Convention Against Torture and Other Cruel, Inhuman or Degrading Treatment or Punishment.

“When I went to the ICRC, I saw several people, especially mothers, who came to complain that they had not heard anything about their sons for months,” Mohammad says.

“Every night, young Palestinians are taken from their houses to be interrogated by the General Security Services of Israel,” Yael Shalem told In These Times via e-mail. Shalem is an administrator at the Israel Palestine Center for Research and Information, an organization working to help peacefully end the Israeli-Palestinian conflict.

Last spring, the Israeli human rights group B’Tselem interviewed 73 Palestinians who has been detained by the Israeli government. They found that two-thirds of the detainees had experienced at least one of four forms of abuse, which included beating, painful binding, curses and humiliation, and denial of basic human rights.

One 22-year-old detainee, called “A.M.,” provided testimony to B’Tselem in 2006 of his experience. “I was put into a tiny cell, 2 meters by 2 meters. There was no window and it wasn’t ventilated. The cell’s door was like a metal bomb shelter door. There was a mattress on the floor. I was alone in the cell and I stayed there until the next day.”

Thirty-one-year-old “S.A.,” who had been detained and interrogated in 2005 by the Israel Security Agency, said he was tied to a chair for many hours. “I had severe back pains because I had been sitting tied to the chair for so long. There was only one break in the interrogation, for an hour, which was when I got my lunch, while still tied to the chair with only one hand released to eat.”

Despite Yazan’s hardships, Shalem said he is “lucky to be the son of his father, who knew how to contact international friends.” Mohammad has ties to Brandeis University in Massachusetts, where he helped lead a Middle East Youth Leaders Exchange Program. Friends from the university’s surrounding communities have been rallying support for Mohammad, and generating letters of outrage to the Israeli embassy and Secretary of State Condoleezza Rice. Many of the letters have been written by Jewish Americans.

Eve Brown-Waite, a writer and mother in Deerfield, Mass., wrote, “I am concerned for this young man who has not been charged with any wrong-doing, for his family, who by the accounts of friends of mine who know them, are good people working for peace and friendship between Palestinians and Israelis, and for the Israeli-Palestinian peace process. Surely this type of breach of civility and legality can only undermine that process.”

Katharine Baker, a member of the American Friends of the Palestinian House of Friendship, says she reacted to Yazan’s detention in a “very personal way.” Baker first met Mohammad several years ago when he was traveling in western Massachusetts, and then visited his family, and met Yazan, in Nablus in 2006.

“We immediately began to tell our friends about this,” Baker says. “It always seems that the more you can give public attention to an issue like this, the better it is for the victim. Rather than the secrecy of taking someone and holding them incommunicado, we’re trying to challenge that.”

Baker says the groundswell of support isn’t just about Yazan, but about all of the “random imprisonments and the people who are in jail with no charges and access to legal help.”

For Mohammad and his family, bad fortune doesn’t knock twice; it barges in. On Dec. 4, nearly one month after Yazan’s arrest, Israeli soldiers were back at Mohammad’s house.

“When they came into the house they were banging hard on the front door, threatening that if you don’t open quickly we’re going to explode the door,” he said. “So I went and I opened the door, and they said ‘Everybody should come here.’”

Mohammad told the soldiers that his wife was getting their 13-year-old son Majed out of bed. “While his mother was waking him up, Majed said, ‘Mommy, it’s not the time to go to school now.’ She told him, ‘No, you need to wake up, the soldiers have come.’ He started crying and shivering and I took him and put him in my hug and wrapped him in a blanket.”

The family was told to wait in a room while the soldiers “turned the house upside down.” When the soldiers finally left, they didn’t tell the family, who was still huddling together.

“We waited for about 10 minutes before we discovered that there was no noise in the house,” Mohammad says. “I started shouting, ‘Is there anybody there?’ Then I went with my daughter and started searching and we found no one, but the front door of our house was open.”

As if a hurricane had hovered on their home, the damage to each room was immense. A phone call at 5 a.m brought more bad news; the Sawalha’s second home, which they were in the process of moving from, had also been raided.

Photos of the wreckage reveals a gutted mattress and a bed frame turned on its side like a squirming beetle; a gaping oven with the door torn off; papers, books and valuables strewn across the floor that could take hours, if not days, to reorganize.

“This kind of action didn’t just damage the furniture; it also damaged the peace of my family, and the peace of the child that is only thirteen years old,” Mohammad said.

As Mohammad’s family pieces their lives back together, and tries desperately to free Yazan, across the world, politicians in Annapolis and Paris have been meeting to discuss a peace deal between Israelis and Palestinians.

For Mohammad, such meetings seem futile. “I think they are not going to do anything if human rights are violated, if there is a very deep scar in our souls and in our spirits as Palestinians. I am one of them.”

But that deep scar doesn’t prevent Mohammad from wanting lasting peace. “What [the Israeli government is] doing in detaining our people, in destroying our spirit–that will not give them security. Only the opposite. It will create hatred in the hearts and in the minds of the coming generations. We need to be respecting each others rights, and that way we guarantee the lives of Israelis, and the lives of Palestinians.”

Every American Should Be Guaranteed a Job. The Green New Deal Could Make That Happen.