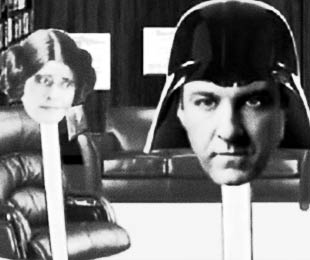 "Soprano Wars" is one of the parody videos on www.livevideo.com.

Save the Dramatic Chipmunk

When college kids make mashups of Hollywood movies, do they violate the law? Not necessarily, according to a study Peter Jaszi and I completed at American University. In fact, those funny little videos you watch when you’re supposed to be working–if you’ve missed “Dramatic Chipmunk,” the best five seconds on the Internet ever (Yes, Google it now)–are important harbingers of a more participatory media culture. Defending the rights of their creators to use copyrighted material without permission may be defending the future of media for political and social action, as well.

What we can do and say in online video matters because it has been mainstreamed. By May 2007, nearly three-quarters of American Internet users were watching online videos for 2.5 hours a month–about two short videos a day, according to the measurement company comScore.

Perhaps the most-viewed online video, “The Evolution of Dance,” has been watched almost 70 million times.

Technological possibility is triggering a creative tsunami, as scholar Henry Jenkins has noted. Yesterday’s fan culture is now today’s popular culture. Look at the many homemade variations on the “Saturday Night Live” appearance by Justin Timberlake singing “Dick in a Box” (“Box in a Box,” “Puppet Dick in a Box”).

Online video has also become the latest marketing tool for business enterprises. In an article in the Wall Street Journal, the maker of a bulletproof backpack for children claims to have sold a thousand packs within weeks of launching his homemade YouTube video.

As with the rest of digital culture, new online videos often quote copyrighted material, which many makers assume is illegal. That’s because they confuse this kind of use with peer-to-peer file sharing, in which people take copyrighted material without altering it. But when such material is taken to make new work, it’s often legal, under what is known (though not widely enough) as “fair use.”

Fair use, an important part of copyright law for more than 150 years, is a right to reuse copyrighted works without a license when the value to society is greater than the value to the copyright owner.

Copyright law needs fair use; without it, granting ownership right would be granting censorship right. Copyright would violate the First Amendment because owners could control what anyone said about existing culture. As the length of copyright terms have extended, effectively eliminating public domain material that have outlived copyright, fair use has become a way to use copyrighted material without permission.

But what exactly is fair use? It was deliberately kept vague in order to let community practice define it. In some creative communities, fair use is simple. Documentary filmmakers actually created a Statement of Best Practice in Fair Use (available at centerforsocialmedia.org/fairuse), which has reduced ambiguity and enabled the making of films like This Film Is Not Yet Rated, which uses 134 movie clips without permission.

But that’s not stopping copyright holders from trying to kill it, possibly by accident. Content providers worried about piracy and theft, like NBC Universal and Viacom, are working out deals with online video providers like Veoh and MySpace, for specialized filters and software to identify copyrighted material. These filters will “take down” videos that are copies of copyrighted material. The trouble is, nobody has figured out how to protect online videos that use copyrighted material under fair use. As Fred von Lohmann, a lawyer with the Electronic Frontier Foundation, says, it’s like going tuna fishing without a dolphin-safe net.

Until now, no one has recognized the enormity of the problem of accidentally suppressing legal work. Our study, “Recut, Reframe, Recycle: Quoting Copyrighted Material in User-Generated Video,” sheds light on the size of the problem.

We show that many online videos use copyrighted material in one of nine ways that are eligible for fair use consideration. (We weren’t saying that they were all examples of fair use, only that these kinds of uses can be seen–and in some cases have been widely recognized–as fair use.) Consider:

The study found six other uses of copyrighted materials that deserve consideration under fair use. These span today’s online videos, from remixes and mashups to diaries to “rescue” of video, such as Stephen Colbert’s White House Correspondents’ Dinner speech.

We need access to the copyrighted material that composes our existing culture if we are going to make new culture and comment on the old.

To nurture new culture online, fair use must be recognized and easier to use. New makers who know they have the right of fair use must defend it from misguided and carelessly written technological tools that endanger it.

It’s easy to look at “Dramatic Chipmunk” and dismiss this new cultural expression as trivial. But that would be a mistake. Today’s makers–feckless, impudent, brash and extravagant–are the pioneers of an emerging media economy and society. They are at the bleeding edge of a world that we all hope to participate in. That’s a world where we can comment, critique and create out of the culture we have, without crippling fear of irrational punishment or censorship.