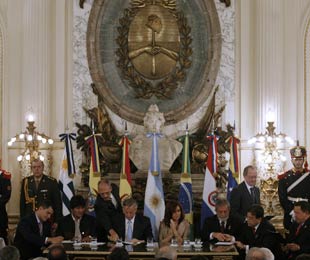 Latin American leaders launched the Bank of the South at a ceremony in Buenos Aires on Dec. 9, 2007. The back will support regional development in order to wean the region of institutions like the International Monetary Fund and the World Bank.

The new Bank of the South shatters neoliberal economics

In the closing weeks of 2007, a region in revolt against the economics of corporate globalization issued its most unified declaration of independence to date.

On Dec. 9, standing before the flags of their countries, the presidents of Argentina, Bolivia, Brazil, Ecuador, Paraguay and Venezuela, along with a representative from Uruguay, gathered in Buenos Aires and signed the founding charter of the Banco del Sur, or the Bank of the South.

The Bank of the South will allow participating governments to use a percentage of their collective currency reserves to strengthen Latin America’s economy and promote cooperative development. It plans to begin lending as early as 2008 with around $7 billion in capital.

By itself, the bank represents a serious challenge to U.S.-dominated institutions, such as the International Monetary Fund (IMF), the World Bank and the Inter-American Development Bank (IDB). As part of a larger trend, it signals a major break from the policies of “free trade” neoliberalism that dominated in the region throughout the ’80s and ’90s.

The Bank of the South’s creators are keenly aware of the significance of this break. In the words of Venezuelan President Hugo Chávez, the bank is “aimed at freeing us from the chains of dependence and underdevelopment.” Ecuadorian President Rafael Correa concurred, arguing that with the bank, “South American nations will be able to put an end to their political and financial dependence that they have had with the neoliberal model.”

Officially, the international financial institutions are keeping their tone upbeat. On Dec. 11, IMF Director General Dominique Strauss-Kahn told Agence France-Presse that the new bank is “not a problem; it’s maybe an opportunity.” Similarly, Augusto de la Torre, World Bank chief economist for Latin America, said, “As far as the World Bank is concerned, this new initiative is not perceived as a competitor.”

But in March 2007, as Latin American leaders were first discussing the creation of a new body, one anonymous insider at the neoliberal IDB told the Financial Times that the Bank of the South represented the largest threat to his institution in decades. “With the money of Venezuela and political will of Argentina and Brazil, this is a bank that could have lots of money and a different political approach,” he explained. “No one will say this publicly, but we don’t like it.”

There is good reason for those invested in the Washington Consensus to dislike the Bank of the South. In recent decades, the IMF, the World Bank and the multilateral regional banks have largely controlled poorer countries’ access to credit and development financing. These institutions allowed developing countries to avoid defaulting on their debt, provided funds in some difficult times and gave a nod of approval to private creditors. But the price the countries paid in return was steep.

In order to stay in their good graces, developing nations have had to privatize industries, open markets to foreign businesses, liberalize capital flows, keep monetary policy tight and implement fiscal austerity (that is, cut needed social services for their people). In the end, such policies proved disastrous in Latin America.

Per capita GDP, which had been growing at a steady rate throughout the ’60s and ’70s, grew hardly at all in the subsequent two decades of neoliberalism. During the latter period, the region also developed some of the highest levels of inequality in the world.

The Bank of the South would work to remedy this situation. Unlike the preexisting financial institutions, the new bank will be run by Latin American countries themselves, will not be dominated by any single nation and will be free to support development approaches that are much more sensitive to the needs of the poor.

A May 2007 statement of South American finance ministers affirmed that the new bank and other mechanisms of regional integration “must be based on democratic, transparent and participatory schemes that are responsible to their constituencies.”

With the exception of Paraguay’s Nicanor Duarte Fruto, each of the Latin American leaders involved in the Bank of the South was elected in recent years on a mandate to split from Washington. Well aware of the failures of economic neoliberalism in the region, and under pressure from an enlivened citizenry, the bank’s members have outraged the international business press by working to do just that.

Several governments have moved to free themselves of direct oversight from the IMF by repaying loans early. In December 2005, Argentina and Brazil announced that they would pay off $9.8 billion and $15.5 billion, respectively. The IMF, which benefits from interest payments on long-term loans, was nonplussed.

Argentina, which was a model of the IMF during the ’90s and suffered severe economic collapse in 2001, vocally declared good riddance. Then-President Néstor Kirchner triumphantly proclaimed that throwing off the chains of IMF debt constituted a move toward “political sovereignty and economic independence.”

Since then, Latin American governments have been one-upping each other in their acts of defiance.

In Bolivia, upon taking office in 2006, President Evo Morales announced he would let the country’s standing loan agreement with the IMF expire. In May 2007, he declared Bolivia would withdraw from a World Bank arbitration center that handles investment disputes, usually favoring corporate interests. Nicaragua has similarly rejected the authority of the center.

Correa topped them by ejecting the World Bank’s representative to Ecuador in April 2007. He declared the officer a persona non grata in the country, insisting, “We will not stand for extortion by this international bureaucracy.”

That same month, Chávez announced that Venezuela would withdraw from membership in the IMF and World Bank altogether. While the country is still working out the details of this move, the prospect is unprecedented in the era of corporate globalization.

The ability of oil-rich Venezuela to provide its neighbors with financing they previously might have needed to beg for from Washington is a significant factor in their willingness to break with the IMF and World Bank. Venezuela has offered billions in support to countries–including Argentina, Bolivia and Ecuador–and those backup funds make many countries less susceptible to threats of capital flight than in the past. Along with investments from China and India, it dramatically reduces Washington’s ability to starve dissident leaders of financial resources when governments grow, in its view, disobedient. The Bank of the South will help to formalize a source of alternative finance and place it under regional control.

The establishment of the Bank of the South comes at a particularly bad time for the IMF. The institution’s troubles were brought into relief at its annual fall meetings in mid-October, after which the Washington Post contended, “the International Monetary Fund needs restructuring, and maybe a bailout.”