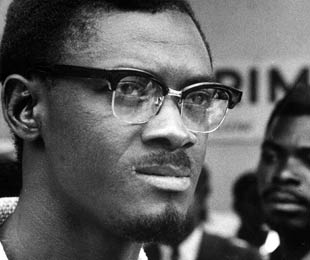 Patrice Lumumba, the Congo's first-elected, left-wing Prime Minister, is remembered around the world as an icon of African independence, but is legacy is more complicated at home.

In Search of Lumumba

Kinshasa lies on the flat banks of the River Congo like a dissolute mistress in repose–slow and haggard, but with a dignity and washed-out beauty. Most of the city is made up of “le Cite,” the huge slum metropolis that makes up almost two-thirds of this city of 7 million. The landscape is an alternately dusty and muddy sprawl of dense shanties that seem to stretch forever. Here, grubby white egrets and lizards–rather than pigeons and rats–dominate the smoldering trash heaps.

However, on the tree-lined boulevards of the crumbling downtown, one feels the essence of modern Congolese history. It’s a story of brutally uneven development that, after the optimistic moment of African de-colonization that began with Ghana’s independence in 1957 and swept across the continent, leading to Congo’s independence three years later, was then arrested and eroded by kleptocracy and war.

Kinshasa’s architecture is frozen in the historical amber of that period, when the Central African country won independence from Belgium in 1960. It was the time when its first-elected, left-wing Prime Minister Patrice Lumumba governed and provided hope, if nothing else.

Who knows what Lumumba would have become? He leaned toward socialism and, when spurned by the West, turned to the Soviets for military support. Some accounts from Western journalists and diplomats portray him as impulsive and erratic. Maybe he would have devolved into corruption and megalomania like so many other leaders who began their public careers close to the people, but then drift away.

As it was, the brave Lumumba, only 36 when he was killed, became a symbol of Pan-Africanism and Third World political hope. He was one of the few Congolese to have studied abroad–a measure of how the Belgians had enforced illiteracy and confusion upon their colonial subjects.

Today, life in the Democratic Republic of the Congo is hard: too often marked by starvation, disease, refugees, banditry, war and other unspeakable violence. The last decade of foreign invasions and civil war has killed 4 million people in the Congo, mostly from attendant disease, according to the International Rescue Committee. Congo’s crisis finds its ultimate causes in colonialism’s deep wounds–the violence of the slave trade and Belgian humiliation and brutality. But it also relates to the overthrow of Lumumba.

Post-colonial relations got off to a bad start. On June 30, 1960, at Congo’s Independence Day celebrations, the Belgian King Baudouin I adopted a condescending and self-congratulatory tone. Enraged, the young, black prime minister, Lumumba, countered with an impromptu speech that disabused the king and other Belgians of any notion that colonial rule had been a beneficent affair.

“We have witnessed,” he said, “atrocious sufferings of those condemned for their political opinions or religious beliefs, exiled in their own country, their fate truly worse than death itself.” Lumumba continued: “We have seen that … a black traveled in the holds, at the feet of the whites in their luxury cabins. Who will ever forget the massacres where so many of our brothers perished, the cells into which those who refused to submit to a regime of oppression and exploitation were thrown?”

The Belgian delegation was horrified. And Belgian business interests were worried they would lose their mines and plantations. A few days later, the Congolese military mutinied, then a Belgian-fomented secession broke out in the mineral-rich southern province of Katanga. Lumumba struggled to regain control, but was deposed and arrested only three months later.

It began messily, as these things always do. President Joseph Kasavubu dismissed Lumumba. But this was not necessarily a legal maneuver, and Lumumba refused to recognize the edict. Then on Sept. 14, Defense Minister Joseph Désiré Mobutu Sese Seko, staged a coup d’etat that was backed by the CIA and several European powers.

At first, Lumumba was placed under house arrest. After four months, during which time political chaos and sporadic violence took hold of the Congo, he was “allowed” to escape and then fall into the hands of secessionist forces that beat and shot him to death in the presence of Belgian officers. Documents now show that the murder, like the coup, took place with tacit Western backing.

The West feared that Lumumba would expropriate foreign capitalists and attempt to use the Congo’s tremendous natural wealth for the benefit of its people. And when, at the height of the crisis in the summer of 1960, Lumumba asked for Soviet military support and received it, well, that was the last straw. The CIA had drawn up assassination plans of its own, and President Dwight D. Eisenhower and British Prime Minister Harold Macmillan had discussed the need to get rid of Lumumba. Belgian industrialists and the Belgian government were also both separately backing anti-Lumumba forces. The full story of this sordid imperial subterfuge is laid out in Ludo De Witte’s The Assassination of Lumumba.

After five years of sharing power with President Kasavubu and playing along with the charade of constitutional government, Mobutu staged a second bloodless coup and declared himself the sole political leader. He reigned as Congo’s absolute ruler from 1965 to 1997, in that time pulverizing not only the Congolese economy and infrastructure, but also its intellectual life.

Fire in his wake

Lumumba is remembered the world over as an icon of African independence. But how is he thought of here in the Congo after three decades of Mobutu?

Near the Kinshasa airport there is a statue of Lumumba, but when I talk to the Congolese people, they recall Lumumba in a fragmented fashion–if at all.

“He was our first president,” says a handyman at a Catholic mission.

“He became a communist,” offers one student.

“There is a university named for him,” says a driver.

My friend Tshibasu Dieudonne, who teaches English at a Jesuit high school, explains why I’m never able to get a clear answer on who Lumumba was. “There is no political culture here,” Tshibasu says.

I ask: “Did they teach much history under Mobutu?”

“No,” says Tshibasu. “Only about Mobutu, his family, his life.

“The current Prime Minister Antoine Gizenga is a Lumumbaist,” explains Tshibasu. “But he is an old man. The president just gave him the job.” When I asked whether that meant the prime minister is a socialist, Tshibasu responded with an avuncular, “No, no, not like that.”

Dictatorships have a way of scrambling people’s memories. And many dictators themselves tend to both repress and embrace the culture of their victims. (When Iraqi President Saddam Hussein was killing Kurds, he would often dress in traditional Kurdish attire and visit Kurdistan.)

The son of a cook, Mobutu became a noncommissioned officer in the Belgian colonial military, le Force Publique. Before independence, Mobutu studied in Belgium where he met Lumumba and was, at first, one of the prime minister’s allies.

After gaining power, Mobutu stole wildly, exploited his people, murdered his enemies and serviced U.S. and Western agendas, most notably by supporting the anti-communist Angolan forces of UNITA (the National Union for the Total Independence of Angola).

Yet Mobutu’s regime swathed itself in a pseudo radicalism, a more-African-than-thou nationalism. He outlawed wigs and Western suits, and expropriated many large European-owned companies, giving them away to friends in his party, the Popular Revolutionary Movement.

In 1966, Mobutu officially “rehabilitated” Lumumba, which meant that, instead of being condemned or ignored, the memory of the martyred prime minister was now woven into the national mythology.

Then in 1971, in a “recourse to authenticity,” as Mobutu put it, he Africanized his name, those of many towns and renamed the country Zaire. His new name became Mobutu Sese Seko Nkuku Ngbendu wa Za Banga, meaning “the all powerful warrior who goes from conquest to conquest, leaving fire in his wake.”

In a traffic circle near Kinshasa’s central bank stands a three-story high statue of the late President Laurent Kabila, who was a former ally of Lumumba and a Marxist guerrilla. Kabila fought against Mobutu for two decades. During the ’80s, he disappeared into Uganda, turning into a diamond smuggler. In 1997, Kabila was back, installed as president by invading Rwandan and Ugandan troops, to fill the vacuum after Mobutu died of cancer.

From the neck down, the Kabila monument looks strangely like Kim Jong Il: baggy uniform, creased pants, the raised arm, a little book in his left hand. From the neck up, the statue is the thick, grim bald mug of Laurent Kabila (his son Joseph is the current president). “The body was made in North Korea,” explains my driver Felix. In other words, the body is Kim Jong Il’s, but with a fat, scowling Kabila head simply welded on.

Christian Parenti is an American investigative journalist and author. His books include: Lockdown America: Police and Prisons in the Age of Crisis (2000), a survey of the rise of the prison industrial complex from the Nixon through Reagan eras and into the present; The Soft Cage: Surveillance in America From Slavery to the War on Terror (2003), a study of surveillance and control in modern society; and The Freedom: Shadows and Hallucinations in Occupied Iraq (2004), an account of the U.S. occupation in Iraq. Parenti has also reported from Afghanistan, Iraq, Venezuela, and Bolivia.