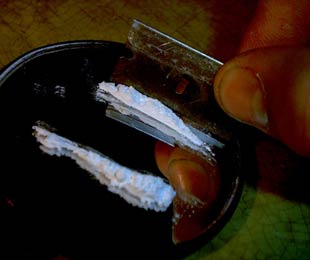 Sure, cocaine can kill you, but the U.S. government classifies it as less harmful than marijuana.

War on drugs leads to explosion of female incarcerations

Oklahoman Tina Thomas has been caught up in the American war on drugs.

In many respects, she fits the common profile of a woman doing time for a drug-related offense. Her crimes have ranged from possession to check forgery and theft, including an arrest for trying to steal a $64 comforter from Wal-Mart. Eventually sentenced to a two-year state prison term, Thomas admits that she committed her crimes to feed the “800-pound gorilla on my back that I just hadn’t been able to shake.”

Thomas is part of an alarming statistical trend and a modern-day American phenomenon. For starters, she is one of half a million people (roughly one-fourth of the total prison population) locked up on drug-related charges. Thomas is also an inmate in a state that locks up women at one of the highest per capita rates–129 per 100,000 residents, a figure that is right behind Texas, the federal system and California. Oklahoma’s imprisonment of women rose a stunning 1,237 percent from 1997 to 2004.

Drug addiction is what led Thomas down the river to prison, she admits freely. What’s a bit more unusual about her is that she holds a medical doctorate from the University of Illinois, and was a practicing neurologist and professor at a teaching hospital. She stood out in her field to such a degree that her colleagues felt uncomfortable around here, particularly after she disclosed she was a lesbian. What Thomas didn’t disclose, however, was an early childhood marred by incest, the lingering pain from which she used cocaine as an escape. Unfortunately, her cocaine use took a painful turn into a full-blown crack addiction.

Thomas and other women have had the misfortune of being sucked into what the federal government calls the “war on drugs.” We have our own “drug czar,” who sits atop the massive Office of National Drug Control Policy (ONDCP). President Nixon started this war in 1969, and President Reagan kicked it into high gear. It’s been a full-throttle battle since, even through the Clinton years.

In 2005, the FBI reported that law enforcement officers made more arrests for drug-abuse violations (1.8 million) than for any other offense.

One of the most surprising facts about these figures, as far as police are concerned, is the drug of choice: marijuana. Cannabis is classified as a Schedule I drug, which means that it is one of the most dangerous drugs imaginable.

Cocaine, on the other hand, a leading cause of overdose deaths, is classified as a Schedule II. So is PCP. Go figure.

In 2005, nearly 43 percent of all drug arrests were for cannabis possession (37.7 percent) or “sales and manufacture” (4.3 percent). That’s millions of arrests and billions of dollars–and amounts to a lot of misery and money down the drain.

In 2008, the ONDCP drug-war budget will reach a record $12.9 billion, with $8 billion of this funding being funneled into law enforcement. Bear in mind that these are only the official numbers. Many criminal justice experts point out that the figure doesn’t incorporate the costs of incarcerating people sentenced for drug offenses. The real expenditure, including the costs of imprisonment, comes close to $22 billion, according to an analysis by the drug policy newsletter, Drug War Chronicle.

We’re not getting much of a bang for these big bucks. Unintentional drug overdoses have become the second-most common form of accidental death after car crashes. While the government increases funding for antidrug missions in Colombia and Afghanistan by tens of millions every year, federal allocations to the Center for Substance Abuse Prevention and the Center for Substance Abuse Treatment are being cut by $32 million in 2008.

A 2006 Government Accountability Office report revealed that our $1.4 billion antidrug media blitz wasn’t working, either. And it wasn’t the first organization to note this. In 2003, the White House Office of Management and Budget disclosed that it found these ads lacking in any demonstrable success.

What’s worse, the people who need help aren’t getting it. In the rest of the Western world, assistance with drug and alcohol problems is widely accessible. They predominantly view heavy drug use or full-blown addiction as public health issues, not behavioral issues subject to prosecution (except in cases involving other criminal activity).

In the United States, however, rehabilitation and counseling are difficult to access without money. The waiting lists for free or subsidized rehabilitation programs can run from a few months to a couple of years–even in progressive cities like San Francisco or Seattle.

Most American women, as well as men, have used some form of intoxicant (legal or illegal) during their lives, and half of all women ages 15 to 54 admit to having used illegal drugs specifically.

An estimated 22 million Americans are currently dependent on alcohol, drugs or both, although the real number is likely to be much higher, particularly as the figure does not take into account the 71.5 million people age 12 and up who use tobacco–many of whom are likely addicted to nicotine.

Anyone who has ever smoked cigarettes habitually can relate to what even heroin and other hard-drug users have told me on several occasions–that nicotine is the most addictive drug they have ever taken, and the hardest substance to quit. (Small wonder that the tobacco ban in many prisons has started a fierce black market, where a single cigarette can cost between $5 and $10.)

Regardless of whether they are caught, more than 9 million women each year use illicit drugs, and another 3.7 million use prescription drugs without medical authorization.

One such woman, Danielle Pascu, 29, got hooked on prescription drugs after the birth of her daughter. At first she was grateful for the prescribed Vicodin that got her though the lingering pain from a caesarean section and untreated postpartum depression.

But it didn’t take Pascu long to develop a full-blown habit, where she was eventually falsifying her prescriptions in order to get more. Pascu had no criminal record, had never used drugs before and was generally unaware of the risks involved. These days, Pascu is serving nearly three years in the sun-baked and dilapidated Arizona State Prison Complex in Perryville.

At this point, drug violations and property offenses account for a majority (59 percent) of females in state prison. By comparison, men in both of these offense categories add up to just 39.5 percent. Meanwhile, in federal prison, women and men convicted of drug offenses constitute nearly 60 percent of inmates.

Tina Thomas knows that she has a quadruple strike to overcome. She’s a black female with a former cocaine addiction, in a state that prefers to lock people up for substance abuse and that will deprive her of public assistance when she gets out. She now faces a lifetime ban on federal benefits, including contracts, licenses and grants.

As a drug offender, Thomas won’t be able to get Temporary Assistance for Needy Families (TANF) if she should ever need it. Food assistance, higher-education funding and even income tax deductions for pursuing a college degree are all yanked away from most felony drug offenders.

Yet nearly every other category of ex-offender–including sex offenders, murderers, arsonists and perpetrators of domestic violence–is eligible for these benefits. And, as if all this isn’t bad enough, Thomas will find that even getting a job will be difficult, because she must report herself as an ex-felon.

I’m often asked whether African Americans might just be using drugs more than any other group of people. My response is always met with disbelief until I prove it with the government’s own health statistics: African Americans constitute only 15 percent of drug users nationwide.

FBI data, at first glance, appears to show Euro-Americans bearing the brunt of drug-related arrests. Numerically speaking, they do, in that they are still the majority of the U.S. population. But a closer look reveals something else: African Americans are arrested at three times the rate of their demographic representation.

Marc Mauer, executive director of the Washington D.C.-based Sentencing Project, asks the very pertinent question of whether police are arresting crack and cocaine users in general, or specifically going into communities of color and lower-income neighborhoods, where some people are using drugs and engaging in the street trade.

“Conducting drug arrests in minority neighborhoods does have advantages for law enforcement,” writes Mauer in his 2006 book, Race to Incarcerate. “First, it is far easier to make arrests in such areas, since drug dealing is more likely to take place in open-air drug markets. In contrast, drug dealing is suburban neighborhoods almost invariably takes place behind closed doors and is therefore not readily identifiable to passing police.”

This is a crucial point. Many substance users are men and women with professional careers. People with middle- to upper-class incomes tend to use their drugs behind doors in nice houses, in well-to-do neighborhoods. They slip under the drug war radar, just as college students do.

A quarter of full-time undergraduate students meet the criteria for substance abuse or dependence, something the National Center on Addiction and Substance Abuse calls “wasting the best and brightest.”

Yet none of this is anything that the Office of National Drug Control Policy cares to have mentioned, much less examine. It’s just another one of those inconvenient truths.