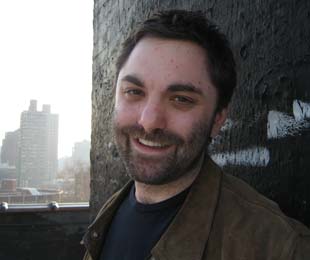 Christopher Shinn is about to become a force in American theater. The 32-year-old New Yorker’s first play, “Four,” about a quartet of lonely individuals on July 4, premiered at London’s famous Royal Court Theatre in 1998 when he was only 23. He has since written six plays, four of which premiered in London before appearing in the United States.

In 2005, he won an Obie for playwriting and a Guggenheim fellowship. His work has been produced at some of the country’s leading theaters, including New York City’s Lincoln Center, the Manhattan Theatre Club and California’s South Coast Repertory.

A former student of Tony Kushner’s, the prolific young playwright’s latest play, “Dying City,” is about an Iraq War widow who is visited by her dead husband’s twin brother. It deals with war, betrayal, love, torture, child abuse and post-traumatic stress disorder. Ben Brantley of the New York Times described the play as an “unsettling study of domestic sadism and subterfuge” that “brought the war home.”

In These Times interviewed Shinn as he was revising his new play, “Now or Later,” about a Democratic presidential candidate and his gay son on election night.

In your plays, you often focus on your characters’ class backgrounds and how they affect their behavior. Where did you gain your insights on class issues?

My mom is from a family without much money and my father grew up in an upper-middle-class family. These two worlds were incredibly different. So, as I was growing up, I saw that the resources one had made a really big difference.

I grew up in an economically diverse town that borders Hartford, Conn. My father, who was not particularly sympathetic toward the poor, nonetheless had a great interest in the different neighborhoods of Hartford, and we’d often go for early morning weekend drives through the city’s streets. There I saw the most profound and unimaginable poverty–and only five minutes away from my middle-class town. This really excited my imagination: What was it like to be rich? What was it like to be poor? When I got to NYU, I met kids who clearly did not have exposure to different classes, and I was astonished at their ignorance.

Many of your most complex characters are teenagers. Why are you fascinated with this age group?

If I were not a playwright, I would be a psychoanalyst who treats severely disturbed adolescents. How our society treats children and adolescents is appalling. We sexualize them and, at the same time, we infantilize them. Adults long to be like them, and even be friends with them, while wishing to exercise authoritarian control over them. So many contemporary adults embody the worst of both worlds–an immature authoritarianism. The double binds and mixed signals we send to adolescents lead inevitably to either mental illness, addiction, or identification with corrupt or abusive adults.

If the truth is snuffed out at adolescence, it’s going to be difficult to ever recover–which is exactly what capitalism wants: submissive subjects who in no way question the society they’re entering, or who rebel against this society’s depredations through addiction or nihilism rather than through a constructive, proactive attempt to reshape it.

The subjectivity one begins to build at adolescence is precious, and there are very few places that encourage it. Art and thoughtful psychotherapy, as well as thoughtful teachers, are all we have. And we’re up against an ideology that’s been at work on these kids since their first flickering of consciousness.

How would you describe your experience as a gay teen in the early ’90s?

I remember tearing up during Bill Clinton’s ‘92 convention acceptance speech when he mentioned briefly how gays are scapegoated. That was incredibly moving. I was 17, and to hear a mainstream politician say, however subtly, that it was not OK to hurt gay people–to have that kind of validation–can’t be underestimated.

But it was still miserable growing up gay. I imagine it will always be miserable, whatever superficial and genuine strides we make. This has to do with the fact that it’s simply really challenging to come into one’s sexuality, whether one is gay or straight or anywhere in between. Sexuality is traumatic. But because of homophobia, homosexuality is more likely to be intertwined with all kinds of traumas.

The more homosexuality is tolerated, the greater becomes the resistance among those threatened by it, leading to even greater negative consequences for gay teenagers.

Given the fact that bisexuality is a potential in all human beings, and this idea threatens many people, homosexuality will continue to be a profoundly complex and divisive issue.

What did you know about “Dying City” before you started writing it?

I try to structure my plays intuitively because, at the deepest level, any work of art represents the movements of the psyche in grappling with trauma. We do not plot out our sufferings in a logical manner in real life–we merely suffer.

The play was structured like a trauma, and the trauma was disguised in three characters. It looked at the profound questions about the links between sexuality, violence, deceit and the truth. I wanted the work to inflict a trauma on the audience–to be something they’d have to struggle with rather than passively experience.

After Abu Ghraib, I knew that the play would center around sexuality, because it seemed that a deep unconscious link no one was making about our reasons for fighting the war had to do with a hatred of “the other” that has become defensively sexualized.

I wanted to illuminate war by exploring the sexuality at the heart of an American couple and an American family. I started the play with an image of sexual violence that, for me, would be the traumatic kernel around which the play would develop.

At the end of “Dying City,” Kelly, numb with despair over the death of her husband in Iraq, sits alone in her apartment and watches “The Daily Show.” Why did you choose that as the play’s final image?

I think “The Daily Show” is a flight from the tragic for people. Cynicism in our culture has a power we don’t acknowledge. To combat it, we need to feel and think about things in a deeper way than we do now.

That final image is a quiet plea that the audience think more deeply about themselves and their country. Go beyond just making jokes and identifying the bad guy and leaving it at that. I mean, Clinton was bombing Iraq for eight years before Dubya. If we think that the problems with our country are just George W. Bush’s doing, then we’re in a lot of trouble.

I see a lot of young playwrights in America writing apolitical works that don’t engage with social reality. Why do you think that is?

Nonprofit theaters rely on funding from corporations and wealthy individuals. It’s likely that liberal audiences and funders are deeply invested in the current structures that have allowed them to make and preserve their wealth, and it’s unlikely that they are truly interested in seeing work that questions the ideological foundations that support their class status.

Artistic directors, who rely on this funding to keep their theaters afloat, are likely–consciously or not–choosing work that appeals to the ideological prejudices of the audiences that sustain their theaters.

This is not a time of great ideological dissent in the art world. There’s a sense among artists today that the world is the way it is and that’s it.

But you refuse to think that way.

We can’t use the way things are as an excuse to give up or to create art that reinforces the dominant ideologies of our country. Artists have thrived in societies much more oppressive than ours. And it’s important to remember that.

We have to remember we’re able to write what we want to write–so far–without being censored or put in jail. We might not get all the audiences we want, but no one is stopping us from doing the work that we think should be done. To me, the artist’s responsibility is to do the work.

Where should the artist begin?

Any artist needs to come up with a theory of human nature. And mine has to do with an inherent vulnerability in people, and their attempt to escape that vulnerability through a narcissistic denial of reality. That’s been around since the Greeks and Shakespeare’s tragedies.

I hope my plays can be so emotionally truthful that they break through that impenetrable shell of narcissism that characterizes the contemporary American and deliver audiences over to the tragic core of their vulnerability. If I can break through that shell, there’s a chance that each audience member will be a little more compassionate to others and a little more empathetic to people’s suffering.