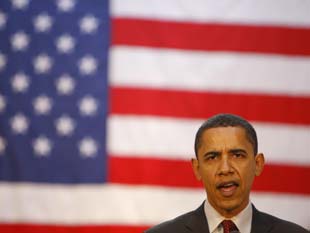 In February, as the battle intensified for the votes of economically anxious blue-collar workers, Sen. Barack Obama (D-Ill.) took his campaign to the dwindling number of American factory floors, pledging to fight for good jobs, fair trade and shared prosperity. Speaking to workers at a General Motors assembly plant in Janesville, Wis., Obama said, “A country in which only a few prosper is antithetical to our ideals and our democracy.”

But the economic outlines for a potential Obama administration remain unclear. “Who knows what his economic policies are?” asks one sympathetic economist from a union that has not yet endorsed a candidate. “They seem pretty unformed.”

Yet even the unions that have endorsed Obama–including most members of Change to Win–have found it hard to differentiate his economic policies from those of Sen. Hillary Clinton (D-N.Y.)

“I had until recently felt that both Clinton and Obama campaigns were quite economically conservative,” says Thomas Palley, a progressive economic consultant and writer. “But the Obama campaign does seem more a work-in-progress and, therefore, more open to influence.”

The candidate’s advisers offer limited clues. The Guardian’s Daniel Koffler tags Obama as a “left libertarian,” reflecting the influence of economic advisers like Austan Goolsbee from the University of Chicago–the Vatican of the free market fundamentalists. The work of Obama’s advisers suggests that he would rely on marginal tinkering with markets and incentives to try to achieve some progressive ends, such as more equality or opportunity.

Such a strategy would be consistent with what Cass Sunstein, Obama’s colleague at the University of Chicago Law School, identifies as Obama’s “minimalist” approach to law and politics. As Sunstein argued in The New Republic, Obama would be inclined to make modest adjustments in institutions in search of his “visionary” goals.

But the people that a President Obama would pick for his top economic policy positions would likely be drawn from the Democratic establishment. Wall Street representatives, such as President Clinton’s former Treasury Secretary Robert Rubin, are likely to have a big voice in an Obama administration. They would focus on balanced budgets, a strong dollar, low inflation, a light hand in financial regulation and restraint on spending that might spook traders. “Change,” however, might be more likely if Obama tapped more progressive Clinton administration veterans, like Nobel prizewinner Joseph Stiglitz or former Federal Reserve member Alan Blinder.

When it comes to many of the larger issues hounding the economy, Obama hasn’t done much to distinguish himself. He has not been a visionary on the subprime crisis, and his adviser Goolsbee indicated in a New York Times column that the only problem is the rampant fraud that was an integral part of subprime lending. In his proposal to deal with the subprime mortgage debacle, Obama does not support the foreclosure moratorium and interest rate freeze that Clinton and many citizen and labor groups advocate.

But Dean Baker, co-director of the Center on Economic and Policy Research and an early forecaster of housing bubble problems, argues that Obama’s plan is admirable because it is less of a bank bailout than Clinton’s. The problem now, he points out, is not so much the interest rates that are resetting at a higher level, but that the value of people’s houses has declined to less than what they initially paid. Baker advocates guaranteeing people facing foreclosure an option to rent their homes at fair market value. This would avoid many evictions and pressure banks to work out more favorable mortgage agreements.

Obama’s main flaw seems to be excessive caution, not favoritism to the financial services industry, which has contributed almost as much to him as it has to Clinton. But Obama is not beyond influence.

Obama’s national finance chair is Penny Pritzker. Chicago’s wealthy Pritzker family owned half of Superior Bank, a pioneer in subprime lending. When the bank failed in 2001, the family signed a sweetheart deal with federal regulators that let it off with a profit while many depositors lost money. (But Penny’s brother, J.B. Pritzker, is a major Clinton supporter.)

And for years, executives of Exelon, the Illinois-based nuclear utility, have been among Obama’s biggest contributors. (Obama insists nuclear power should not be ruled out as a potential energy source, even if he also promotes alternatives.)

Even with the departure of Edwards, trade politics remains contentious. This is especially true in Ohio, where Obama scored points with NAFTA critics by taking aim at its provisions that give foreign investors the right to challenge national laws in special trade tribunals.

Obama argues that globalization is inevitable, but government should “make sure trade works for American workers.” His solution emphasizes ending tax breaks for companies going overseas (fine, but not likely to change much behavior) and offering tax incentives to companies that create good jobs in the United States (symbolically laudable but ineffective and probably a waste of public funds).

“The upside is [Obama] hasn’t dug in on the wrong position, is not surrounded by the Clinton crowd and has a more open view,” says Lori Wallach, director of Public Citizen’s Global Trade Watch. “But, on the other hand, it has not been a priority where Sen. Obama has exerted lots of his considerable brain power.”

Forces to reckon with

Obama provides a distinctly American mix of lofty hopes for the future, as well as nuts-and-bolts pragmatism. The missing ingredient is a coherent analysis of how society works. Rather than attack corporations, he attacks lobbyists. But corporate power–not corporate lobbyists–should be in question. “We are still at the stage of not quite grappling with the real issue that confronts America, and that issue is the power of the corporations to globalize and to drive the political agenda,” says Palley.

If elected president, Obama would face two external forces that could embolden him to take a more progressive stand.

First, any victory will spring from a popular, youth-accented movement that has high hopes and is fired up and ready to go. He may need to heed the advice of Daniel Burnham, the late 19th century Chicago urban planner: “Make no small plans.”

Second, Obama can’t resolve the mess left by the Bush administration without bold action. To make serious economic progress, he will have to end the $3 trillion war in Iraq–already more expensive in real terms than any conflict except World War II, acording to Stiglitz. The subprime financial crisis, which is likely to get worse as the recession deepens, will require re-regulation of financial markets, as well as an ambitious government investment program to generate growth and job creation.

There’s also the fact that wealth and income are more unequally distributed now than at any time in U.S. history since the late 1920s. During the Bush “recovery,” the top 1 percent of households captured three-fourths of all new income created. In the last seven years, wages stagnated as productivity grew, and 3 million manufacturing jobs vanished, leaving the average person earning less at the end of the recovery than before the previous recession.

Making taxes more progressive by rolling back Bush tax cuts for the wealthy is a start. But evidence from rich countries–compiled by University of Arizona sociologist Lane Kenworthy–shows that governments reduce inequality more through spending (say, on healthcare or free education) than through progressive taxation alone. The problem with Obama’s plan is that it relies heavily on varied tax cuts (and a few hikes) to bring change.

First, the trade deficit and borrowing need to be curtailed, since they have flooded global capital markets with dollars, fueling the housing bubble and recovery driven by consumer debt.

Second, the federal government needs an economic strategy that does not rely on speculative bubbles but pricks them before they become a danger to the overall economy. Financial markets must be more transparent and more closely regulated.

Third, workers need bargaining power so that wages grow. This would provide not only a better standard of living but also the foundation of a stronger economy and a more egalitarian and cohesive society. Government must not only restore the right to organize but also boost wages and improve working conditions (such as mandating paid family leave and sick leave).

Workers can effectively raise their wages when labor markets are tight. The Federal Reserve and the federal government need to make full employment at least as important a goal as relatively stable prices.

Obama has not promised anything so ambitious. There is a bright side however. “The fact that he’s raising hope, that’s tremendously important,” argues one uncommitted progressive economist, whose organization has not endorsed a candidate. “Bill Clinton’s genius was lowering expectations. But revolutions, historian Barrington Moore argued, come when there are rising expectations.”