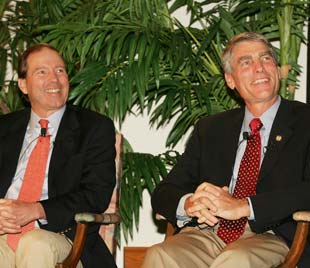 Cousins Tom (left) and Mark (right) Udall, both U.S. representatives are running for the Senate in their respective states.

The Udall Boys lead the Democratic charge for the Senate

Despite being first cousins, Tom and Mark Udall act more like brothers. Their parents were close, so the two spent plenty of time together growing up, sharing dinners with their siblings, cracking jokes and playing under the Arizona sun. As the boys grew older, their friendship matured. Outdoorsmen to the core, they possess a common love of mountain climbing, and together have scaled some of the world’s highest peaks.

“We think a lot alike,” says Tom, “and we enjoy the outdoors together. We enjoy being around each other.”

It’s a quintessential family narrative, but the Udalls aren’t the quintessential family. Based in the interior West, the Udall clan boasts a lineage that spans four generations and has deep roots in both major political parties. They’re the most important political family most Americans have never heard of. But after this election cycle, that could change.

Tom and Mark are progressive U.S. representatives in New Mexico and Colorado, respectively, who have each set their sights on an open, Republican-held Senate seat in their home states. Meanwhile, Sen. Gordon Smith (R-Ore.)–the Udalls’ second cousin–is in a tight re-election campaign himself, one that Democrats are targeting heavily. If all goes according to the party’s plan, two new Udalls would be in the Senate, one would be out, and a filibuster-proof majority would be within reach.

Enough with Clintons and Bushes. Meet the Udalls.

It’s a common joke out in the Mountain states: the Udalls are “the Kennedys of the West.” Terry Bracy, chairman of the Morris K. Udall Foundation and a longtime family friend, thinks the comparison is misguided. “They never acquired any wealth and never sought any wealth,” he says. “They were interested in the essentials of life. Maybe it came from their heritage.”

The bedrocks of that heritage are humble beginnings and a strong Mormon faith, embodied initially by the family patriarch David King Udall. His story, and that of his descendents, reads like something out of a Gabriel García Márquez novel.

A year after his birth in 1851, David King’s dirt-farming English parents traveled west from Missouri along the Mormon trail to Utah. After years working on farms and railroads, young David was sent by Mormon pioneer Brigham Young to serve as a Mormon bishop in Northern Arizona.

Soon after moving to Arizona, the federal government targeted him on trumped-up charges of unlawful cohabitation and perjury. The former charge was dropped but the second stuck, and in 1885, he spent time in a Michigan federal penitentiary. Just months into his three-year sentence, however, Democratic President Grover Cleveland issued him an unconditional pardon, affixing the family’s party affiliation for life.

Unlike other partisans, David King–who was a polygamist–could not afford to alienate political opponents. His second wife, Ida Hunt, was a Republican, an identity she would pass on to her heirs.

David King also relied on Morris Goldwater, the Democratic Jewish mayor of Prescott, Ariz., (and uncle of conservative icon Barry Goldwater), who once bailed him out of jail. As religious minorities in Arizona public life, Morris and David King were natural allies and their families forged a bond that endured even after their politics diverged.

Says Mark Udall: “It was that kinship and that friendship and that joint experience on the frontier, where Mother Nature was really the adversary instead of other human beings, that’s really informed our legacy of public service.”

Instead of becoming church leaders, David King’s four sons moved into government life. One served in the Arizona state legislature, another was mayor of Phoenix and two were appointed to the Arizona Supreme Court. The most accomplished was Levi–the only Democrat–who took his role on the bench seriously. “My grandfather [Levi] used to talk about public servants,” says Tom. “He would never say ‘politician.’ And he said if good people don’t step forward and serve the public, then the scoundrels will take it over.”

Among his many accomplishments, Levi wrote the 1948 decision that enfranchised Native Americans in Arizona, a controversial position among both Mormons and the state’s white population at large.

Together, the Udall brothers solidified what has been called “the Udall Ethic” of conservation, public service and consensus building. Stewart, a WWII veteran, championed the Great Society’s landmark environmental bills, most notably the 1964 Wilderness Act. Mo was also a dedicated environmentalist, spearheading the 1980 Alaska Lands Act, which doubled the size of America’s national parks system. He also spoke out against the Vietnam War and led a movement for institutional reform in Congress, taking on campaign finance issues and the antiquated seniority system.

Like their father, Stewart and Mo understood the importance of safeguarding the rights of people of color in the Southwest. They were active in the fight to integrate Arizona’s schools long before Brown v. Board reached the U.S. Supreme Court, and Mo was a leading advocate for the Indian Child Welfare Act, which gave tribal governments a strong voice in child custody proceedings.

How did the Udalls win votes with political views that were to the left of many of their constituents? People close to the family suggest that all the Udalls share a compassionate sensibility that disarms political opponents. “They have the gift of humor,” says Bracy, “and they have that special way of communicating with people that seems not to offend them.”

As if on schedule, a fourth generation of Udalls is emerging from the Rocky Mountain valleys and rising to public office. Tom, son of Stewart, knew he wanted to pursue politics from an early age. “There was this feeling,” he says, “that it’s a very noble calling to serve the public.”

After graduating from the New Mexico School of Law in 1977, Tom clerked for Chief Justice Oliver Seth of the U.S. 10th Circuit Court of Appeals and was eventually appointed assistant U.S. attorney. In 1990, he was elected attorney general of New Mexico, a position he held for two terms. When current Gov. Bill Richardson left his congressional seat in 1998, Tom jumped at the chance to fill it. Five terms later, Tom is still in office, garnering huge majorities in a racially diverse district.

Mark Udall took a different route to D.C. After graduating from Williams College in 1972, he worked for Colorado Outward Bound, a nonprofit that runs youth wilderness programs. In his 20 years with the organization, Mark transformed Outward Bound into a national institution that serves 60,000 people each year. But after holding every position in the organization, it was time for a new challenge.

“Sure enough,” Bracy jokes, “the gene kicked in at some point.”

In 1997, Mark won his first race for the Colorado state legislature, filling a seat that only one other Democrat had held in 30 years. After walking the district for months, he found he had a knack for campaigning.

Just two months into his term, 12-term incumbent Rep. David Scraggs retired from Congress, and Mark decided to again roll the dice. He won. And in an unplanned but fitting twist of fate, Mark entered the House in 1999 alongside his cousin Tom, where the two have served since.

The Udalls have carried on the conservationist legacy of their fathers, a cause they wear on their (rolled-up) sleeves.

Mark, who co-chairs the House Renewable Energy and Energy Efficiency Caucus and sits on the Natural Resources Committee, thinks that America is on the cusp of a “green revolution.” He crafted legislation to protect many of Colorado’s wilderness areas and helped turn the former Rocky Flats nuclear weapons plant into a wildlife refuge. Tom, as New Mexico attorney general, created the state’s first environmental enforcement division and has led efforts to preserve the Valle Vidal in northern New Mexico for public access.

The environment isn’t the Udalls’ only issue. Both voted against the 2002 legislation that gave President Bush the authority to go to war in Iraq (although Colorado antiwar activists have criticized Mark more recently for his votes to continue funding). Both voted against the Patriot Act–two of only 66 representatives to do so. And both are pro-choice in states where that stance can be a political liability.