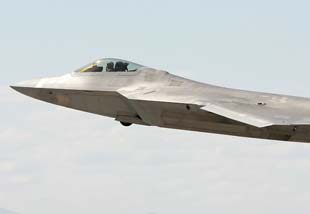 A U.S. Air Force F-22 Raptor takes off from Nellis Air Force Base. The plane was designed to counter a Soviet aircraft that was never built.

Shape Up and Ship Out

A year after former Defense Secretary Donald Rumsfeld resigned, someone dumped at the Washington Post’s door an avalanche of his “snowflakes”: his term for the multiple memos he circulated within the Pentagon during his tenure.

One flake in particular rises to the top of this heap. In April 2006, Rumsfeld advised staffers to respond to the growing calls from retired generals for his resignation in this way: “Talk about Somalia, the Philippines, etc. Make the American people realize they are surrounded in the world by violent extremists.”

Goosing fear with menacing–and vague–portraits of global terrorist threats has worked remarkably well to buttress the Bush administration’s militarized foreign policy, especially since 9/11. This policy, as enshrined in the current National Security Strategy and articulated by National Security Adviser Stephen Hadley, is based on the “ability to act militarily anytime, anywhere to defend our global interests.”

Though fear remains a powerful force in American politics, large majorities of Americans are no longer buying what the administration is selling. They are no longer equating the presence of violence-minded groups in Somalia and the Philippines with the idea of an America “surrounded in the world by violent extremists.” According to a Pew Research Center study, one-third of Americans believed in 2006 that military force can reduce the risk of terrorism, down from half in 2002.

The budget to finance the administration’s military aspiration is larger than any previous budget since the end of World War II. The newest Pentagon request, including war spending, tops $650 billion–twice what it was, measured in 2007 dollars, in 1960.

During the Cold War, the Soviet Union was willing to try to match our military spending. Now, no country even thinks of trying. “Half a trillion dollars is more than enough,” says Richard Betts, an adjunct senior fellow in National Security Studies at the Council on Foreign Relations.

Yet neither Sens. John McCain (R-Ariz.), Barack Obama (D-Ill.) nor Hillary Clinton (D-N.Y.) is challenging the need for such a massive global U.S. military presence–or the budget to pay for it. McCain wants to add 150,000 troops to the overall force, Obama calls for 92,000 more troops and Clinton wants to, as she says, “expand” the military.

The upcoming election is our best chance in years to demand a new foreign policy, one that puts the terrorist threat in proportion and engages the world differently. Under this policy, the military would assume its rightful role as a tool of last resort.

As terrorism has replaced the Cold War as the new focus of our foreign policy attention, the United States has neglected four equally urgent security challenges: climate change, nuclear weapons, regional conflicts and growing global inequality. None of these requires a military cure. A foreign policy that refocuses its attention on these challenges would involve major shifts in our foreign policy budget.

A $213 billion cut in military spending is possible almost immediately, according to a preliminary analysis at our organization, the Institute for Policy Studies. This would include ending the expensive Iraq occupation, closing many U.S. overseas military bases, eliminating weapons systems that are redundant and economically inefficient, and cutting military assistance to other countries.

First, we must end the immoral and counterproductive Iraq War. A small fraction of the $99 billion that the United States is likely to spend on the war in 2008 could be used to bring the U.S. troops home.

A larger amount would be needed to help those troops transition into civilian life, similar to the post-World War II GI Bill. To that end, troops brought home from Iraq–as well as from other bases overseas–could be retrained to help create a clean energy and energy-efficient infrastructure in the United States to stave off the disastrous effects of climate change. This kind of investment could generate millions of new jobs retrofitting U.S. buildings and constructing solar, wind and other clean energy infrastructures.

Second, we must cut the sprawling network of U.S. bases around the world, many of which are relics of the Cold War. Today, nearly 700,000 military and civilian personnel are stationed overseas or afloat. Closing just a third of the more than 1,000 overseas facilities would save taxpayers $45.9 billion–but it’s an issue that none of the U.S. presidential candidates dares touch.

Most of these facilities are located in three countries: Germany (302 bases), Japan (111) and South Korea (106). These nations should top the list if, and when, the United States starts the rollback. But we also need to stop the new U.S. Africa Command and close U.S. bases in the Caspian Sea region, where our interests are tied to our fossil-fuel energy past rather than our clean energy future. What’s more, shutting down bases would remove targets of anti-Americanism overseas.

Like our allies, who remain secure without a network of bases around the world, the United States should put more foreign policy priority on engaging with other countries culturally, diplomatically and economically.

Third, at least 11 areas of unnecessary weapons spending could be cut from the budget without decreasing U.S. security–saving another $43.9 billion. These include the F/A-22 “Raptor” fighter jet, which was originally designed to counter a Soviet aircraft that was never built; the Ballistic Missile Defense, a system that doesn’t work for a threat that doesn’t exist; and the C-130J transport plane, a costly item that has 168 documented deficiencies that could pose illness, severe injury or death.

Fourth, and finally, we can cut several smaller budget areas that include military assistance to countries that frequently enable human rights abusers, fuel conflicts and strengthen the military of countries at the expense of civil society.

More than $1 billion, for example, goes toward the so-called “drug war” in Colombia, Bolivia and Peru–roughly 70 percent of which funds military approaches that have increased violence and killings, yet done nothing to decrease the drug trade.

The United States currently spends nine times more money on its military forces than on all other security tools, including diplomacy, nuclear nonproliferation, peacekeeping, foreign aid and homeland security put together. And no candidate talking about “change” should be taken seriously unless she or he is serious about doing something about this fact.

The American people know this over-militarized approach has not made them or the rest of the world safer. In an October 2006 Angus Reid poll, 65 percent said the country has been “too quick to get American military forces involved” in conflicts. Instead, the public supports more “preventive” measures. According to a November 2007 World Public Opinion poll, for example, 78 percent of Americans “believe that all countries should eliminate their nuclear weapons” through a well-established international verification system.

Our diplomatic mission requires more resources, particularly to address shortfalls in staffing and to upgrade antiquated information and communications systems. And even after 9/11, the Bush administration continues to shortchange the very programs that experts believe are needed to protect against terrorist threats–such as increased funding for our first responders and public health system. Such improvements would help us deal with other hazards and emergencies, as well.

Major deficiencies in our rail, transit security procedures and cargo screening also exist, according to the 9/11 Public Discourse Project, the successor organization to the 9/11 Commission. In each case, the main obstacle has been a lack of money.

In 1989, when the Berlin Wall came down and the world celebrated the end of the Cold War, a number of military experts and U.S. generals suggested that the United States could slash its defense budget without jeopardizing the country’s security.

“I’ve been maintaining for some time now,” former CIA Director William Colby said in 1993, “that our defense budget could safely and modestly be cut to one-half what it was in the later days of the Cold War.” At the time, the military budget stood at $300 billion.

Fifteen years later, the Cold War is long over and the U.S. military budget has more than doubled–and that’s without taking inflation into account.

Voters–Republicans and Democrats alike–have been telling pollsters they want not a modest course correction, not a turned page, but a whole new book. With a new president as the author, let’s hope the book rewrites our country’s wildly unbalanced security policies.