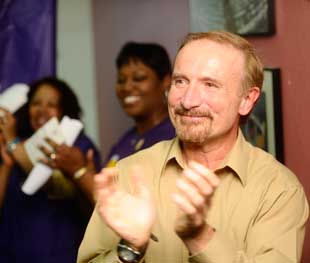 Dissent in the Ranks

SEIU Is the Nation’s Fastest Growing Union – But at What Cost?

No American union today exercises more influence than the Service Employees International Union (SEIU), a leader in both organizing and political action. And no union leader gets more – or more favorable – press coverage than its president, Andy Stern.

As a result, a political fight now developing within SEIU has broad implications for the labor movement and progressive politics. And the decisions the union makes at its June convention in Puerto Rico are likely to intensify debate over how the labor movement can grow on a grand scale – both in numbers and power.

The in-fighting pits United Healthcare Workers-West (UHW) – a 150,000-member California healthcare local union – and its president, Sal Rosselli, against the international union’s leadership. Simmering for several years, the disagreements boiled over in February when Rosselli resigned from the international union executive committee. Then, in late March, Stern took the first step toward implementing a trusteeship that would allow him to oust UHW leaders and take control of the local.

A complex web of grievances caused the dispute. But Rosselli charges that Stern has pursued growth in numbers by centralizing power and resources, and by granting concessions to corporations. SEIU’s growth, he claims, has come at the expense of workers’ power. Rosselli believes the union needs to rely more on comprehensive pressure campaigns involving workers to neutralize employer opposition to unionization.

But SEIU international leaders say Rosselli is unwilling to support national union strategies because he is narrowly focused on the interests of his local. They maintain that the union needs more national coordination of resources and activity to better confront national and, increasingly, global employers.

“Fundamentally,” says SEIU spokesman Andy McDonald, “the issue is that there’s a disagreement about the fact that there are democratic decision-making procedures in SEIU that [Rosselli] has withdrawn from, and he disagrees with strategies he supported previously [when they benefited him] and that other local leaders support.”

The fight has deep roots. In 1988, Rosselli, a former nursing home worker, won an insurgent campaign to lead what was then Local 250 in the Bay Area. He rebuilt the union by emphasizing democratic decision-making and worker militancy.

In 1996, Rosselli supported Stern’s candidacy for SEIU president and his plan to strengthen local and national organizing. Rosselli implemented a highly successful organizing drive that used strikes and negotiations with employers to secure the right for workers to organize with little interference. He also cooperated with other locals and the international to win neutrality from hospitals, especially the big Catholic Health Care West chain. The local also organized nursing homes, and was the country’s first union to organize homecare workers, which is now the main area of SEIU growth nationally.

In 2005, Local 250 merged with southern California healthcare workers (Local 399) to form UHW. From 2001 to 2006, UHW added 65,000 members – more than any other SEIU local – although recent gains have slowed as UHW builds several long-term hospital organizing campaigns. UHW also supplied organizers and funds to help hospital workers organize around the country.

Organizing nursing homes proved more difficult. In 2003, Local 250 and another local of long-term care workers signed on to an experimental organizing agreement that SEIU International had negotiated with the Nursing Home Alliance, a group of nursing home operators. Alliance companies agreed that if SEIU successfully lobbied for higher state reimbursements to operators, they would be neutral when the union organized selected facilities.

But in 2007, when the agreement came up for renewal, UHW criticized many of its components. The deal had pushed for “template” contracts that barred strikes and limited collective bargaining rights. The pact also gave Alliance operators control over which facilities could be organized, limited economic gains to a fixed share of what the union won politically, prohibited employee criticisms of nursing home operations (except when they were legally obliged) and required the union to back the industry’s plan for tort reform – thus going against the union’s community and patients’ rights allies.

SEIU International and Tyrone Freeman – who heads what is now United Long Term Care Workers, Local 6434 – wanted to extend the agreement, for as long as even 20 years. But opposition from Rosselli and UHW ultimately nixed its renewal. SEIU leaders blamed Rosselli for providing information for a San Francisco Weekly article about the Alliance contract, though both he and the reporter deny his involvement.

SEIU went on to establish similar agreements in Washington and New Jersey, and reportedly adopted much of the Alliance model in new neutrality agreements with multi-service companies, such as Sodexho.

The split over the Alliance model symbolized and deepened the division that had already been building.

Rosselli supported consolidation on the condition that each local voted individually (as in UHW’s merger), rather than in a pooled vote proposed by Stern, which privileged big locals merging with smaller ones. Rosselli also supported the idea of one statewide healthcare local covering hospital, nursing home and home care workers, as SEIU is organized in several states. The international, on the other hand, favored putting all nursing home and home care workers in Tyrone Freeman’s local.

Although the union’s hearing officers ultimately kept Rosselli’s jurisdiction largely intact, tensions continued to escalate. Rosselli says that he was increasingly excluded from meetings that affected his local’s members, and maintains that international union representatives interfered with negotiations with major employers.

“The red thread that runs through this is that a growing [SEIU] approach is to ask the employer, ‘We want to represent your employees. What is it that you want?’ ” says UHW policy director Paul Kumar.

Rosselli says the union will be stronger if it involves members in a fight to raise standards at work while winning organizing rights for non-union workers. But for the international union, he says, “growth trumps standards. The most important thing is growth.”

Indeed, SEIU has grown, and its claim to leadership in the labor movement rests on that success. The union claims it had about 1 million members in 1996 when Stern was elected, and 1.9 million today.

Almost 500,000 of them are home care, home childcare and similar quasi-public workers previously treated as independent contractors. While winning representation for them is a big step – and an attractive way to boost membership – it involves a different type of organizing than recruiting members at a workplace under a private, typically hostile employer.

Like many unions, SEIU tries to persuade employers to be neutral when it organizes, and it often mounts ambitious campaigns, at times actively engaging members – as in its successful Justice for Janitors campaign. But the difficulties of organizing have made the union rely more on external campaigns against employers (at times with little worker organizing) and on forging neutrality agreements – such as with the Nursing Home Alliance – that deny workers a fully functioning union.

Out of their growing frustration at realizing large-scale organizing success, SEIU’s leaders have sought new approaches, says Jerome Brown, who recently retired as president of the SEIU 1199-New England local and as an international executive board member. Brown says the international increasingly tries to win neutrality agreements by becoming the company’s partner.

“When you look at how the international uses these things, you have to unfortunately say, ‘No, this is not the right way to build a union,’” he says. “The international has centralized power to get the boss to defang himself, but the international is also defanging the members. They’re selling workers’ ability to self-determination.”

Now the union’s leaders are proposing centralized organizing plans for each major union division. The new 20-year plan will replace local union strategies and shift more dues money to the international. The organizing strategy, which will be presented at the June convention, calls for expanding proven models and developing new models, including expanding the union’s innovative work challenging private equity companies. It also proposes recruiting more member-organizers and temporary organizers from social justice movements, expanding global organizing, and committing to more political work, including passage of the Employee Free Choice Act, which would institutionalize “card check” (allowing unions to be certified when a majority of workers sign union cards).