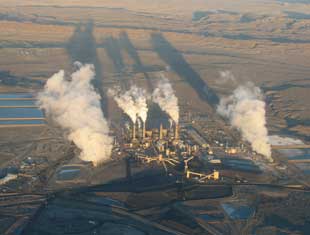 As a child, bonnie Wethington remembers hunting for “star-crossed fairy rocks” and catching lizards in thigh-high grass below the majestic Ship Rock and Church Rock on the Navajo Nation, near Four Corners (where Arizona, Colorado, New Mexico and Utah meet).

Now in her 40s, Wethington, a member of the Nation, laments that the grass is sparse and scrubby, and there is hardly a lizard in sight. She says the changes in the land have much to do with the noxious plumes pumping out of two massive coal-burning power plants in the area, and the harvesting of coal from a wide gash in the red and gold earth that runs for miles near her family’s land.

“Now we just have a barren wasteland and acid rain from the power plant,” she says, adding that Navajo consider small reptiles their evolutionary forebears – so their disappearance is ominous.

The Navajo, like a number of Native American tribes in the Southwest, has found itself in an ironic conundrum.

While this swath of Native land is largely dry, windswept and difficult to farm, it sits in an area rich with mineral and fossil fuel resources – coal, natural gas, oil and uranium. Although Native Americans believe in protecting the earth like a mother, exploiting these resources has provided one of few economic lifelines for a number of impoverished Native communities.

The Southern Ute tribe in southwest Colorado is flush with income from its natural gas leases. About 1,300 tribal members enjoy monthly payments of about $1,400 and, after age 60, a generous pension of about $65,000 a year; plus the use of a spacious fitness center, Montessori school, hospital and other amenities. That’s thanks to the Southern Ute Growth Fund, a private equity investment fund that, since its 1999 inception, has leveraged its gas income into a $1.45 billion portfolio, including real estate, construction and oil exploration. (The tribe declines to break down how much of this investment is in natural gas.) A large wooden seal adorning the tribe’s headquarters shows a gushing oil well and gas pipelines, along with livestock and mountains – its traditional tribal identifiers.

But historically, it was outsiders who exploited Native Americans lands, leaving environmental and social havoc in their wake.

The Black Mesa Coal Mine on Navajo and Hopi land, east of Phoenix near the New Mexico-Arizona border, is a prime example. The mine fed coal to the Mohave Generating Station located 273 miles away in Laughlin, Nev., via a slurry pipeline – meaning the coal was ground and mixed with water to form a slushy liquid that could be pumped through the pipeline. Each year, the tribes sacrificed about a billion gallons of their sparse water supply to blend and pump the coal to Laughlin, where it was burned to produce electricity for a large swath of the West. Meanwhile, one in three Navajo homes – about 18,000 total – has no electricity, according to the Navajo Tribal Utility Authority.

In 2005, the Environmental Protection Agency (EPA) closed the Mohave Generating Station – built by multinational Bechtel – because of its high sulfur dioxide emissions. With the station closed, Black Mesa’s coal production has been suspended until the Peabody coal company can find another customer.

Also on the reservation, 130 miles north of Black Mesa, the Four Corners and San Juan coal-burning power plants produce electricity that is transported to regional customers on high-tension power lines that pass right over many unwired Navajo homes.

(These are the plants Wethington blames for destroying the local ecology and causing cancer. Numerous studies have also linked emissions from coal-burning power plants to higher rates of asthma and other health problems. The Black Mesa mine has no connection to these plants.)

Now the Navajo tribe is considering a $4 billion coal investment that proponents claim would give the tribe ownership over – and significant profit from – its mineral resources.

Navajo President Joe Shirley Jr. supports the proposed Desert Rock generating station, which is spearheaded by the New York firm Sithe Global Power, in partnership with the tribal Dine Power Authority. The station would generate 1,500 megawatts of power, burning local coal harvested by BHP Billiton – one of the world’s largest mining companies and the current supplier of the Four Corners and San Juan plants.

Shirley, a controversial figure who made Desert Rock a central platform of his 2006 re-election campaign, describes the plant as a way to “put food on the table and put shoes on little feet.”

Proponents say the tribe would earn $50 million a year in coal royalties, taxes, jobs and related investment. Plus, if it can come up with the capital, the tribe could purchase up to 49 percent interest in the venture. Fliers handed out by proponents promise jobs that could pay $60,000 a year.

“This is the first energy development we’ve been able to personally be a part of,” says tribal chapter president Lucinda Yellowman Bennalley. “We’re very excited.”

Bennalley and other proponents of the plan say many of their relatives who have left the reservation because of a lack of jobs want to return, and they hope jobs at Desert Rock would make that possible.

But the proposal has divided the tribe, shattering long-standing friendships and alienating neighbors. During a March meeting with journalists, Shirley described Navajo opponents of the plan as “dissidents.”

Meanwhile, these critics say they have suffered ongoing harassment and intimidation from tribal police. George Hardeen, spokesman for Shirley’s office, says that claims of harassment – including murdered dogs and cattle – were investigated by independent veterinarians and were found to be groundless.

Lucy Willie, 65, who lives near the proposed Desert Rock site, was part of a December 2006 encampment protesting the Desert Rock plan. Armed tribal police threatened to take her to jail, she says.

If the Desert Rock plant opens, not only would it bring emissions, but BHP Billiton could also significantly expand its coal mining operations across its 25-square-mile lease.

Brad Bartlett, an attorney with the Energy Minerals Law Center, charges that BHP Billiton has done a poor job of safely storing waste from the open pit and underground mines it currently operates on Navajo land, and of restoring the tapped-out sites it has mined to supply the Four Corners and San Juan generating stations with coal.

“None of this land has been restored to its pre-mining usage,” Bartlett says. “The waste has everything in it: mercury, selenium, cadmium, radiological contaminants. The ash is stored in unlined ponds and the dust goes everywhere. Eventually they will probably leave the Navajo Nation with the cost of the cleanup.”

Willie, who has tended sheep on the same land since she was 7 years old, doesn’t want to see the ecosystem destroyed this way.

“Five-fingered creatures are supposed to nurture a healthy environment,” she says. “Navajo are not meant to be wanderers. We always come back to a place we call home. Generations down the line, I hope this will still be here for them.”

The Navajo Nation is divided into 110 chapter houses, with each chapter acting essentially as a small local government. The Burnham chapter, which encompasses the proposed Desert Rock site, voted against the idea. Then the boundaries were redrawn so the site lay within the Nenahnezad chapter, which voted for it.

However, the tribe still needs an air permit from the Environmental Protection Agency (EPA). On March 18, the Diné Power Authority and Desert Rock LLC (a subsidiary of Sithe) sued the EPA, claiming it has delayed the permit for four years and is obligated to act.

On March 12, prior to the filing of the suit, Navajo President Shirley, who flew to Washington, D.C., to meet with EPA administrator Stephen Johnson, characterized the federal government’s failure to shepherd through the project as a violation of the tribe’s sovereignty. Likewise, he claims outside environmentalists are stirring up opposition among tribal members.

“Outsiders are coming in, foreigners giving money to Navajo to say no,” Shirley told a group of journalists on the reservation shortly after his meeting with the EPA. “The majority of Navajo support it. What do you want us to do, continue to stay quagmired in poverty? I want to get us standing on our own two feet.”

In 1988, the grassroots group Dine CARE formed to protect local forests and fight a proposed toxic waste incinerator near Dilkon, a town in the southwest part of the reservation. (“Dine” roughly means “people,” and it is the way Navajo refer to themselves. CARE stands for Citizens Against Ruining our Environment.)

Last fall, the group released a study on renewable energy potential on the Navajo Nation. It describes “world-class” solar resources in the Arizona side of Four Corners, and reservation-wide “abundance of moderately to highly valuable solar and wind resources, all largely untapped to date.”

“The Navajo Nation is poised to be a leader in renewable energy,” says Dailan Jake Long, who grew up near the Desert Rock site and recently graduated from Dartmouth College. “Solar and wind could supply Navajo homes with electricity without the negative consequences of Desert Rock.”

Wind energy potential is low in the area immediately surrounding the proposed site, but other parts of the Navajo Nation are considered promising for wind turbines. However, a lack of access to high capacity power lines prohibits the large-scale sale of energy to the interstate grid.

Proponents say Desert Rock would be a “clean coal” plant – which refers to plants that use technology with an integrated gasification combined cycle and “scrubbers” – to greatly reduce emissions of mercury, nitrous oxide and sulfur dioxide. Desert Rock’s environmental impact statement says it would emit 12.7 million tons of carbon dioxide per year.

Though the Bush administration has pushed coal as the fuel source of the future, concerns over pollution and greenhouse gases have meant a nearly de facto moratorium on the building of new plants.

Utilities have canceled or suspended plans for at least 45 coal-fired power plants nationwide. Various state governments have adopted greenhouse gas reduction platforms that would make it difficult, if not impossible, for new plants to be built.

In 2006, California led the way by prohibiting the purchase of energy from plants spewing more than 1,000 pounds of carbon dioxide per megawatt of energy produced.

Long and other Desert Rock opponents argue that now is the time to turn to renewable energy for economic self-sufficiency. In late April, Long, 25, will discuss the Diné CARE study and ideas for renewable energy at the United Nations in New York.

“The nation could invest in lifelong clean jobs and sustainable development projects that don’t desecrate the land and relocate people off the reservation,” he says. “This is the opportune time. [Nonrenewable] resources can only last so long. We’re not just about resistance, we’re creating blueprints for our nation, roadmaps for the future.”